For Whom the Sweetie Belle Toils

For Whom the Sweetie Belle Toils is the nineteenth episode of the fourth season of My Little Pony Friendship is Magic and the eighty-fourth episode overall. When the dresses Rarity makes for Sweetie Belle's play get more attention than the play itself, Sweetie Belle ruins the dress Rarity made for Sapphire Shores in bitter retaliation. The title is a reference to a line in the John Donne work, Devotions Upon Emergent Occasions, published in 1624. It was later the title for the Ernest Hemingway novel For Whom the Bell Tolls.

On April 1, 2013, Meghan McCarthy wrote as part of an April Fools' Day joke that the twentieth episode of the fourth season would be titled "For Whom The Sweetie Bell[sic] Tolls[sic]".[3]

This episode is listed as the twentieth episode of season four on Zap2it.[4]

At Carousel Boutique, Rarity is busy at work making dresses for Sapphire Shores and her backup dancers, with Sweetie Belle present to assist. With Rarity sure that she'll have the dresses ready on time, Sweetie Belle asks for Rarity's expertise in finishing the dresses she made for her friends and their play. Rarity is uncertain she'll have time to do so, but before she disappoints Sweetie Belle, she believes she'll be able to with the help of a few extra ponies. Sweetie Belle showers Rarity with thanks and points to her dresses, which Rarity notices are horrid in design.

On opening night, ponies fill the auditorium as Sweetie Belle, Apple Bloom, Scootaloo, and an ever-impatient Cheerilee wait for Rarity to arrive with their dresses. Sweetie Belle admits to having waited until the last minute to ask for Rarity's help, as she wrote and directed the play and wanted the chance to shine on her own. Rarity finally arrives with the dresses, largely improved from Sweetie Belle's original designs, and the play goes on without a hitch, even receiving a standing ovation.

The Cutie Mark Crusaders enter the lobby to accept their audience's praise but find their sisters absent, having gone to pack Sapphire Shores' wardrobe. What's more, the only thing the other ponies remember about the play and talk about are the dresses the Crusaders wore, much to Sweetie Belle's frustration.

As Rarity and her friends pack Sapphire Shores' costumes into boxes at the Boutique, Sweetie Belle storms in. The rest of the Mane Six excuse themselves as Sweetie Belle accuses Rarity of stealing her spotlight. Rarity says she only did what she thought Sweetie Belle wanted, but the angry filly will hear none of it and walks out.

Sweetie Belle paces back and forth in her room, venting her frustrations. Rarity, hearing her from outside, decides to give her time alone. Hours later, Sweetie Belle tries in vain to go to sleep. After having a glass of water, she walks by Rarity's bedroom. In an attempt to get back at Rarity, Sweetie Belle sneaks in and unravels the centerpiece on the headdress of Sapphire Shores' costume. She returns to her room and is finally able to sleep.

A nightmare in Ponyville

Sweetie Belle has a dream of receiving an award for her play. As she accepts her reward, it starts to rain, the ponies all run away, and the award melts in Sweetie Belle's hooves. The cause is a laughing storm cloud resembling Rarity. As the cloud attacks Sweetie Belle with lightning, Princess Luna intervenes and banishes the cloud, and Sweetie Belle realizes that she is dreaming.

Luna sympathizes with Sweetie Belle for being overshadowed by an older sister. She takes the filly into a flashback of her fifth birthday party. Sweetie Belle recalls that Rarity ended up stealing the spotlight from her in spite of her best efforts to make a grand entrance. Luna explains that Sweetie Belle does not know the whole story and shows her the flashback from Rarity's point of view: the foals at Sweetie Belle's party were getting tired of waiting for her, and Rarity tried to salvage the party for Sweetie Belle's sake.

Luna then shows Sweetie Belle a flashback of earlier in the evening, and she sees Rarity struggling with impressing Sapphire Shores with her costumes. As Sweetie Belle hopes everything works out for her, Luna shows Sweetie Belle what the future potentially holds because of her actions. She sees Rarity's efforts to impress Sapphire Shores ending in disaster, her reputation in Equestria getting ruined, secluding herself from the Mane Six, and becoming a frantic recluse while slowly becoming more and more insane.

Sweetie Belle pleads to wake up and finally jolts awake from her horrible nightmare. She hurries to fix her mistake, but Rarity has already left for Canterlot with the dresses, much to Sweetie's shock and horror.

Sweetie Belle and her friends then take a train ride to Canterlot. While Sweetie Belle is concerned about fixing the dress she ruined, Apple Bloom and Scootaloo are more excited about meeting Sapphire Shores.

At a studio in Canterlot, Sapphire and her backup dancers rehearse a dance for Rarity. Outside, the Crusaders' efforts to go inside are hindered by a security guard. As Rarity shows Sapphire the costumes, the Crusaders zip-line into the studio from an upper story window. Just before Rarity can show Sapphire the headdress, Sweetie Belle zooms in, snatches the box away, and runs off with it, prompting Rarity to follow. Rarity chases the Crusaders up and down the studio as they keep the box away from her. Sweetie Belle runs into a vacant room with the box and shuts the door behind her, where she meets Princess Luna again. Sweetie Belle believes she's dreaming again, but Luna assures her that she's awake. Sweetie Belle simply wishes to fix everything, and Luna offers to help.

Sweetie Belle leaves the room some time later and meets Rarity. She demands an explanation, and Sweetie Belle gives one, saying she wanted to fix what she ruined before it was too late. She returns the fixed headdress, and Rarity notices she made a change to it, a change that Sweetie Belle is sure Sapphire Shores will love.

Rarity and Sweetie Belle return to Sapphire Shores, who tries on the completed headdress. She's only mildly impressed with it until she notices the dolphin-shaped stitching on the centerpiece. Sapphire states the dolphin is her lucky animal and they swim with her in her dreams. Rarity asks Sweetie Belle where she came up with the idea. Sweetie Belle looks to Princess Luna by the door and says it came to her in a dream. Sweetie Belle apologizes to Rarity for getting upset about the dresses, and Rarity apologizes for missing the play. She wonders about catching an encore performance, but Sweetie Belle admits her play was not that good and that "the costumes were the best part," as Rarity hugs her.

Sweetie Belle: [deep breath] Let's not get carried away. We've got a whole lobby full of friends waiting to shower us with adoration and praise. Try to be gracious.
Scootaloo: Modest.
Apple Bloom: Classy.

Rarity: Sweetie Belle, if I did anything to upset you, then--
Sweetie Belle: Admit you made those dresses too good on purpose!
Rarity: I thought they were supposed to be good.
Sweetie Belle: Yes, good. Not jaw-dropping amazing!

Sweetie Belle: [imitating Rarity] "Sweetie Belle, get me some red ribbon! No, that's not red, that's cherry! No, that's not red, that's cinnamon!" For Pete's sake, it's all red!
Rarity: [to Opalescence] I should probably go talk to her, hm?
Sweetie Belle: [muffled] At least Sapphire Shores won't be all like "Ooh, who fetched you that red ribbon? Because I don't care about anything else you made. All I care about is that amazing red ribbon!"
Rarity: Perhaps waiting would be best.

Sweetie Belle: Princess Luna! It's really you! Or am I dreaming?
Princess Luna: What do you think?
Sweetie Belle: Let me see. You just rescued me from a maniacal laughing Rarity-cloud. Yeah, probably dreaming.

Sweetie Belle: She left for Canterlot!

Sweetie Belle: Oh, good! This is just a dream!
Princess Luna: Actually, no. This is very much real.

Rarity: And I never did get to see your play. Any chance I could catch an encore performance?
Sweetie Belle: Uh, I don't think the play went all that good. To be honest, the costumes were the best part.
Rarity: Awww! 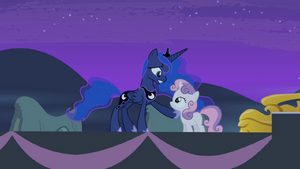 For Whom the Sweetie Belle Toils image gallery