Forever Filly is the sixth episode of season seven of My Little Pony Friendship is Magic and the one hundred and forty-ninth overall. The title is a play on the expression "forever young", which is frequently used in film, television, and music.

In this episode, Rarity attempts to spend quality time with Sweetie Belle, unaware that she's not a little filly anymore. Meanwhile, Apple Bloom and Scootaloo attempt to help Zipporwhill reconnect with her pet dog Ripley.

This episode aired on Canada's Treehouse TV channel on May 6, 2017, one week ahead of its scheduled premiere on Discovery Family.[1]

Zipporwhill's dog Ripley was randomly named after Jim Miller's dog of the same name, and he bears a resemblance to Denny Lu's dog Miso.[2][3]

The episode begins in Canterlot, where Sassy Saddles frantically tries to get Canterlot Carousel ready for the transition from winter to spring fashions. Rarity, on the other hand, remains calm and collected, providing Sassy with everything she needs to get the boutique ready. Once Rarity assures Sassy that everything will be fine, Sassy calms down. Underneath her fabrics, Rarity discovers an old photograph of herself and Sweetie Belle and remembers the fun they used to have together. Realizing it has been quite some time since their last outing as sisters, Rarity gets overemotional.

"I miss my Sweetie Belle!"
— Rarity

Rarity goes through an old photo album of the previous times she and Sweetie Belle spent quality time together, sobbing over their recent drifting apart. Sassy suggests that Rarity visit Sweetie Belle and reconnect with her while she oversees the boutique's winter-to-spring transition on her own. Rarity eagerly agrees, looking forward to spending the day with Sweetie Belle and doing her favorite things.

Meanwhile, in Ponyville, the Cutie Mark Crusaders help a colt named Chipcutter with his cutie mark problem: realizing his potential as a sculptor. They bring him a large stone block, and he carves a sculpture of the Crusaders from it, causing him to earn his cutie mark.

In their first activity together, Rarity takes Sweetie Belle to see a puppet show put on by Claude the puppeteer. Rarity is certain that Sweetie would enjoy it as much as she used to, but Sweetie's interest in the puppet show is mild. Next, Rarity takes Sweetie Belle to her old favorite ice cream shop, where she has even brought the shop's original owner out of retirement to make Sweetie's favorite dessert. While Sweetie's tastes have changed since she was younger, she indulges her sister's efforts so as not to disappoint her.

Later, Rarity takes Sweetie Belle to where balloon artist Twisty Pop is making balloon animals, unaware that Sweetie Belle is uninterested in the childish activities. When Sweetie sees the other Crusaders and Zipporwhill nearby, she confides in her friends that she doesn't feel like Rarity knows her anymore. Likewise, Apple Bloom and Scootaloo are having little progress in helping Zipporwhill.

In their next sister activity, Rarity and Sweetie Belle have a photoshoot in childish costumes. When Rarity notices Sweetie Belle frowning in every photo, Rarity suggests a reshoot, but Sweetie Belle refuses. She finally confesses to Rarity that she's not having fun and that she's outgrown the activities they have been doing. When Rarity insists that Sweetie Belle loves those activities, Sweetie realizes Rarity doesn't know her at all and runs off. At the same time, Apple Bloom and Scootaloo's lack of progress with Ripley causes Zipporwhill to doubt her cutie mark, and she comes to the conclusion that her puppy doesn't love her anymore.

Rarity considers Sweetie Belle ungrateful and unappreciative for the day she had planned for the two of them, and she follows her sister to lecture her. Meanwhile, Sweetie Belle finds Zipporwhill sulking by herself and crying over her seemingly unfriendly puppy. When Sweetie Belle sees Ripley's old puppy toys, she comes up with an idea. They regroup with Apple Bloom and Scootaloo, and Sweetie Belle explains to Zipporwhill that Ripley is no longer a little puppy—he's a full-grown dog—and little puppy toys no longer interest him. She tells Zipporwhill to treat Ripley like the dog he's grown into and find new things to do together with him.

Having overheard Sweetie Belle's lesson, Rarity enters and apologizes for treating her like a little filly. She explains to Sweetie Belle that she loved doing their earlier activities when she was younger and was only trying to recapture that feeling. Sweetie Belle shares her sister's sentiment, and they agree to find new things to do together. As Rarity and Sweetie reconcile, Zipporwhill discovers that Ripley likes to play fetch, and the two successfully reconnect.

Rarity tells Sweetie Belle how proud she is of the pony she has become, and Sweetie Belle is happy that no matter what happens, she'll always be Rarity's little sister. With the little time she has left before returning to Canterlot, Rarity asks Sweetie Belle what she wants to do, and the two share large twin sundaes at the ice cream shop. The episode ends with Rarity and Sweetie Belle smiling for a warm sister photo.

Scootaloo: When is she swinging by?
Sweetie Belle: Well, I think she should be arriving right about...
[door opens]
Sweetie Belle: ...now.
Apple Bloom: Wow. You are good.

Sweetie Belle: Rarity, what are you doing here?
Rarity: I am here to spend the day with you! I'm so excited, I could practically faint! You don't happen to have a fainting couch in here, do you?

Rarity: You used to love doing these things with me.
Sweetie Belle: That's just it! I used to! That's not who I am anymore!
Rarity: But it is you! You love puppet shows and dressing up and taking silly photos and tiny little clown-shaped ice creams!
Sweetie Belle: Really?! If you still think I like doing this stuff, then maybe you don't know me at all!

Zipporwhill: It's just hard for me to believe he's not the same adorable little guy I found anymore.
Sweetie Belle: I understand. But doing things like you used to won't turn him back into a puppy.
Zipporwhill: So... what do I do?
Sweetie Belle: Treat him like the dog he is, and find new favorite things to do together.
Zipporwhill: You think so?
Rarity: I know so!

Rarity: The truth is, I know you're not a little filly anymore. But it's just... the last time we did all of those things together, I... I didn't realize it was gonna be the last last time. I loved doing those things with you. It's hard for me to let that go.
Sweetie Belle: Aww, Rarity! I love being with you too! That will never change! But... maybe we could just try to do different things together? 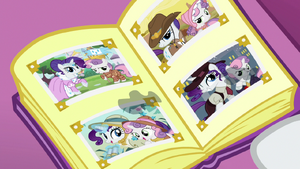 Retrieved from "https://mlp.fandom.com/wiki/Forever_Filly?oldid=2026759"
Community content is available under CC-BY-SA unless otherwise noted.