My Little Pony Friendship is Magic Wiki
Register
Don't have an account?
Sign In
Advertisement
in: Speculation

Blue-coated Starlight next to the cloak rack.

After Sugar Belle knocks Starlight Glimmer down and Starlight recovers the jars of cutie marks, Starlight's horn is briefly un-lit even though she is levitating the jars. It lights up again when she casts the spell to destroy the rock bridge, while still holding the jars. Dogman15 (talk) 04:36, November 26, 2015 (UTC)

One of the background pony's head faces the screen for a split second in that scene where everyone's cutie marks get returned.

Fluttershy's cutie mark got back before catching Starlight Glimmer

Tanks for the Memories 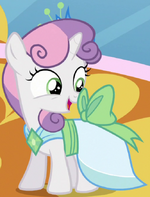 Do Princesses Dream of Magic Sheep?

Noteworthy's bottom of his hooves are missing

Crusaders of the Lost Mark

Brief cutie mark error near the end of The Vote. 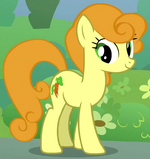 Mane error on the pony to the lower left of Snails

The One Where Pinkie Pie Knows

Between 3:36-3:57, Twilight has regular Pegasus Wings instead of the wings she usally has.

At about 10:47, a tiny Sweetie Belle can be seen behind Apple Bloom, although she should not be of that size or even visible during this shot, as she is actually standing where the other ponies are looking. Image Gulomi Jomesh (talk) 09:57, November 23, 2015 (UTC)