My Little Pony Friendship is Magic Wiki
Register
Don't have an account?
Sign In
Advertisement
in: Speculation

The Return of Harmony Part 1

When Celestia opens the door which (apparently was meant to) contains the box with the elements, when the blue flash of light is shown, Celestia's wings are missingFlutterRose (talk) 17:06, May 29, 2014 (UTC)

Rarity's horn is there even though it was taken away earlier.

Twilight still possess her horn after it was taken away.

A briefly lingering sign of Discord's influence? And what's that above Fluttershy's hoof?

Everything is normal (left) then everything's gone (right).

Applejack has Twilight's eyes, but without the lower lashes

Discord with mirrored head (his horns are swiched) AND 2 beards

His wings are closer to his head than his arms, a reversal! 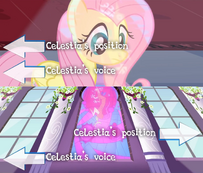 Celestia's voice remains in the left audio channel even after the camera completely rotates in the next shot.

The Return of Harmony Part 2

Twilight's cutie mark appears to be on her knee. 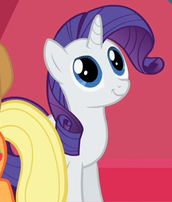 Discord with a mirrored head (his horns are switched)

His head is mirrored again

His mane is missing

Cupcakes are different colors, instead of pink.

Happy that she gets to facehoof?

Twilight's mane and tail are straight.

Now her mane and tail are disheveled.

Alicorn filly just to the right of Twilight

Twilight's tail is in perfect condition.

Railings on the bench...

Luna with her old mane.

Luna with her old mane again.

Huzzah! The fun has been- wait...Jeez. You think maybe SOMEONE might have noticed this before it was aired?

What is up with Luna's eye?

Berry Punch seen in the competition

Berry Punch seen in the crowd

Hat glitch at start of race.

Apple Bloom with her scarf, but it's only supposed be on Sweetie Belle

An animation derp in with the characters' derp

No Hat For 'Jack.

Applejack seen with her hat the next scene.

Not only has it shifted, it's coming off of her too!

May the Best Pet Win!

Falcon is not on Rainbow's back, where it should be perched.

A Unicorn pony rises within seconds.

Flying with one wing.

Secret of My Excess

Spike when he gives his fire ruby to Rarity and when he remembers it at the end.

After Spike's growth spurt when Twilight taunts him with a broom, he gains a second tail for one frame.

Minuette with no horn

Her eye has been shifted just a bit too much.

Her Ears are on the... invisible part?

Silhouettes have vintage clothing like the ones in Granny Smith's flashback. Jeez, turns out these ponies waited AGES for some apple cider.

her legs are like this on the image to the left

And where exactly is that supposed to come from?

Applejack's eye is too big.

Silhouettes from Granny Smith's flashback waiting in line in present to get cider.

Rainbow Dash's front leg is slightly detached at the top.

Hearts and Hooves Day animation error during the picnic scene

Twilight's lower lashes are missing for her entire scene.

Apple Bloom's tongue is sticking out from under her bottom row of teeth.

Scootaloo has no wings and Apple Bloom's eyes.

Twilight with a red streak in her bangs.

Dinky Doo in the wrong layer.

The cover of Daring Do book is from the Griffon's Goblet.

However, the title is "The Sapphire Stone". ... which had this cover instead.

I'm so scared I forgot my shadow!

Both parts of the door are opened.

In the next shot, only the top part is opened.

Twilight is levitating the list, but her horn isn't glowing.

He sure got his cutie mark fast.

The anemometer is measuring high wingpower but nopony is flying yet

The Pegasus has a horn. Then suddenly, no horn.

Where did Angel's right whisker go? This is peculiar...

MMMystery on the Friendship Express

Rarity's eyelashes got back after she lost it

Big Macintosh's cutie mark has white sparkles on him

Oh my! She has a red heart as a cutie mark!
Community content is available under CC-BY-SA unless otherwise noted.
Advertisement
Follow on IG TikTok Join Fan Lab