Frenemies is the eighth episode of season nine of My Little Pony Friendship is Magic and the show's two hundred and fourth episode overall.[1] The title is a common portmanteau of the words "friends" and "enemies".

Grogar deploys his legion of doom on a mission to become allies, but his plan works too well, and they almost become friends.

This episode aired on May 15, 2019, on Cartoonito in Italy, three days ahead of its scheduled premiere on Discovery Family.[2]

Evil united as one

At Grogar's lair, Grogar appears to covet a bell-shaped object in his crystal ball, but the constant bickering between Cozy Glow, Lord Tirek, and Queen Chrysalis distracts him from his schemes. Before he steps out, he commands Cozy, Tirek, and Chrysalis to learn to work together—unconcerned with how they accomplish this—if they hope to achieve their goal of destroying Twilight Sparkle and her friends.

In Grogar's absence, Cozy Glow assumes herself in charge and tries to organize a team meeting with Tirek and Chrysalis. However, Tirek is only concerned with getting back the level of power and physique he reached after absorbing all the magic in Equestria, Chrysalis is only concerned with exacting her revenge on Starlight Glimmer, and neither of them recognize Cozy's self-imposed authority. Through the song Better Way to Be Bad, Cozy inspires some trust and cooperation in her fellow villains at first, but they step on each other's lyrics by the end due to their respective egos.

Grogar returns, frustrated that the three still have not learned to work together. Chrysalis expresses frustration as well because it has been weeks since Grogar summoned them to his lair, and they still do not know what his plan is. Grogar explains that his Bewitching Bell, a talisman that contains the rest of his power, was stolen thousands of moons ago by Gusty the Great and sealed away at the top of Mt. Everhoof. Seeing an opportunity for Cozy, Tirek, and Chrysalis to learn teamwork, Grogar tasks them with scaling the mountain and retrieving the Bell.

Divide and not conquer

At the base of Mt. Everhoof, Cozy Glow shares with Tirek and Chrysalis her plan to scale the mountain and claim Grogar's Bewitching Bell, but they disregard her and each set off on their own. Chrysalis heads through the forest, scaring off any creatures that cross her path, and uses her changeling powers to cross the various hazardous terrains. However, once she is near the summit, the heavy mountain winds prevent her from getting any closer.

On the main path, Tirek tests the mountain winds and determines them to be too harsh to withstand, so he starts building a campfire.

Cozy Glow treks up a snowy mountain pass and finds the residence of mountain guardian Rusty Bucket, on patrol to keep anyone from facing Mt. Everhoof's treacherous conditions. Pretending to be a pitiful, lost filly, Cozy Glow tries to convince Rusty Bucket to escort her to the top of the mountain. When Rusty refuses, Cozy loses her temper, and Rusty warns her to keep her voice down or else risk triggering an avalanche. Cozy tries going up the mountain by herself, but all of her attempts fail. In her intense anger, she causes a giant snowball to roll down on top of her and carry her back to the bottom of the mountain.

United in their hatred

At Tirek's campsite, Cozy Glow returns cold and wet, and Tirek ridicules her for failing to reach the mountain's summit. Having already determined the mountain to be too difficult to climb alone, Tirek decided to let Cozy and Chrysalis do all the work and use what they learned from their inevitable failures to his own advantage. Cozy berates Tirek for his constant arrogance, and Tirek likewise criticizes Cozy for her fake cutesy persona and constant manipulations.

Gathered around the campfire, Cozy, Tirek, and Chrysalis compare notes about their experiences facing the mountain's elements until the conversation steers toward the Mane Six. The three villains come to realize that as much as they hate each other, they hate Twilight and her friends even more and enjoy making fun of them, taking pleasure in the times they almost defeated them. With this in mind, they decide to cooperate with each other for the sake of destroying the Mane Six.

A strange and pleasing magic

The next morning, Cozy Glow, Tirek, and Chrysalis work together to climb Mt. Everhoof, helping each other along the way. Near the summit, Chrysalis and Cozy create a vine bridge across a chasm, allowing all three of them to reach the peak. Outside the cave housing the Bewitching Bell, they discover a magical barrier preventing entry. Cozy suggests that Tirek absorb the barrier's energy, but Tirek says he can only absorb the energy of living beings.

Cozy then suggests absorbing Chrysalis' magic. Chrysalis perceives this as a betrayal, but Cozy assures her that it would just be for the purpose of breaking through the barrier, after which Tirek will return Chrysalis' magic to her. With Chrysalis' begrudging approval, Tirek absorbs her magic, powering up to his third form, but he only has enough power to create a small opening in the barrier. Cozy Glow, being the only one among them small enough to fit, flies through the opening and returns with the Bewitching Bell before it closes.

With their mission complete, Tirek gives Chrysalis' magic back to her as promised. The three villains are surprised to find that they enjoyed working together and relying on each other for help. But Chrysalis angrily rejects the sentiment, realizing she and the others almost fell victim to the Magic of Friendship. Fearing how powerful Grogar will be once he has the Bell, the three decide to continue acting as his servants until they are able to usurp him, after which they can go back to trying to destroy one another.

A scheme within a scheme

Cozy Glow, Tirek, and Chrysalis return to Grogar's lair and tell him that they failed to retrieve the Bewitching Bell. Despite his anger and frustration, Grogar is satisfied that the three were able to work together as he commanded. As he leaves, Chrysalis agrees with Grogar's statement that they are more powerful when they work together—as the Bewitching Bell is hidden from view.

Cozy Glow: [clears throat] I don't want to tattle on my good friend Tirek, but... you might like to know he left food out. Again.
Grogar: I'll deal with it when I'm done.
Lord Tirek: Don't trust anything that nosy little Pegasus says!
Grogar: I don't trust anything any of you say.

Cozy Glow: Grogar left me in charge.
Queen Chrysalis: No, he didn't. And even if he did, Chrysalis obeys no one.
Cozy Glow: [singsongy] There'll be cupcakes.

Cozy Glow: It must get lonely all by yourself. Maybe I could be your friend?
Rusty Bucket: Aw. I'd love a friend.
Cozy Glow: So, now that we are friends, you could help me up the mountain.
Rusty Bucket: Hmm, uh... a real friend wouldn't ask me to do something I'm not supposed to do. Says so right here in the Journal of Friendship, written by Twilight Sparkle and her friends.
Cozy Glow: are. you. kidding me?! [echoing]
[birds chirping]
Rusty Bucket: Shhhh!
Cozy Glow: I didn't want to be friends anyway.
Rusty Bucket: Awww...

Lord Tirek: I'd had enough of you trying to manipulate me with that insincere, syrupy sweetness. At least now we can see the real you.
Cozy Glow: This is not the real me! I'm cute and lovable!
Lord Tirek: [scoffs] No, you're not. You're annoying, and you snore.
Cozy Glow: I do not snore!
Lord Tirek: [mock-snoring]
Cozy Glow: At least I don't talk to my Gram-Gram when I sleep.
Lord Tirek: Don't you dare bring Gram-Gram into this!
[Ophiotaurus roars]
Cozy Glow and Lord Tirek: This is your fault!

Lord Tirek: Indeed it would. Who wouldn't love to see those prissy ponies realize they lost everything?
[transformation noise]
Queen Chrysalis: I'm a pathetic pony princess! I made a detailed list of all the ways I'm a failure!
Cozy Glow and Lord Tirek: [laughing] 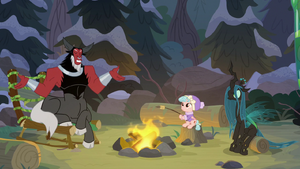