Friendship is Magic, part 1 is the first episode of My Little Pony Friendship is Magic, which premiered to coincide with the debut of its airing television channel, The Hub. The episode is referred to as Mare in the Moon, another title for Nightmare Moon, on Hasbro's viewing guide, and The Magic of Friendship, part 1 in The Elements of Harmony guidebook. It is the first half of a two-part episode.

Under Princess Celestia's instructions, Twilight Sparkle goes to Ponyville to supervise the preparations for the Summer Sun Celebration and make some friends. However, Twilight is preoccupied with the impending return of Nightmare Moon from her thousand-year banishment.

Dane Tee Dove, Lady Gaval, Tall Order, Surprise, and Soarin were to appear in the episode.[2]

The plot of the storybook Friendship is Magic, included in the Friendship Is Magic Gift Set and Pony Friends Forever Pony Scooter Friends Daisy Dreams & Rarity bundles, is similar to the plot of the series' two opening episodes.

Pinkie's surprise party for Twilight reappears in Cakes for the Memories.

A narrator describes two royal sisters who ruled over the magical land of Equestria. The elder sister used her powers to raise the sun, while the younger sister brought out the moon at night. The younger sister became resentful because the ponies of Equestria relished daytime but slept at night. One night, she refused to lower the moon. She transformed into Nightmare Moon, a "wicked mare of darkness," and vowed to shroud Equestria in eternal night. Her sister used the Elements of Harmony to banish her to the moon, and took on responsibility for both sun and moon. The narrator’s voice changes to that of Twilight Sparkle, who reads that harmony has been maintained in Equestria ever since.

The prophecy of Nightmare Moon

Twilight walks by Lemon Hearts, Twinkleshine, and Minuette, who invite her to Moon Dancer's party. Twilight says she has to study and runs off.

She enters a library atop an ivory tower and instructs Spike to find a book called Predictions and Prophecies. Twilight realizes that Nightmare Moon will return on the day of the Summer Sun Celebration, which is the day after tomorrow. She sends a letter to Princess Celestia to alert her. Celestia's reply to Twilight says that she trusts Twilight completely, but she has to stop reading "those dusty old books".

Spike continues to read Celestia's letter on the way to Ponyville. Celestia tells Twilight that there's more to life than studying, and tasks her with supervising the preparations for the Summer Sun Celebration in Ponyville. The letter ends with one other task for her: make some friends. She at first attempts to say "hello" to a pink pony, but the pink pony simply gasps dramatically and speeds off.

Once they reach Ponyville, Twilight and Spike visit Sweet Apple Acres to check on the catering for the Summer Sun Celebration first. Applejack cordially greets Twilight, and members of her family offer her food samples. Twilight wants to leave, but she grudgingly accepts the family’s invitation to stay for brunch.

"Hey, I can clear the sky in ten seconds flat."
— Rainbow Dash

After brunch, Twilight looks at the cloudy sky and remarks that Rainbow Dash isn't doing a very good job of clearing the sky for the festival. Rainbow Dash says she will do it after she practices some flying moves to show the Wonderbolts at the festival. She demonstrates her speed and agility by clearing the sky in "ten seconds flat." She says she can’t wait to hang out with Twilight some more, and flies away.

"Oh my stars, darling! Whatever happened to your coiffure?"
— Rarity

Twilight and Spike visit Rarity, who is decorating the town hall. Spike is instantly smitten with Rarity. She is shocked by Twilight's messy mane and gives her a makeover in Carousel Boutique. She is impressed when Twilight mentions that she is from Canterlot. Eager to get away from the fashionista, Twilight and Spike sneak out of the boutique.

The last item to check for the Summer Sun Celebration is music. Twilight greets Fluttershy and compliments her bird choir, but Fluttershy is too shy to introduce herself. However, she gets excited when she sees Spike because she has never seen a baby dragon before. She follows Twilight and Spike to Golden Oak Library, where they will be staying.

"Hi, I'm Pinkie Pie, and I threw this party just for you! Were you surprised? Were ya? Were ya? Huh huh huh?"
— Pinkie Pie

Inside the library, Twilight and Spike are greeted with a surprise party. Pinkie Pie, the pink pony Twilight encountered earlier, starts talking to Twilight about how she was surprised to see a new pony in town and decided to throw her a party. Twilight accidentally drinks hot sauce and runs out of the room with her mane on fire. In her bedroom on the second floor, Twilight complains that making friends has left her no time to read about the Elements of Harmony. She guesses that Princess Celestia sent her to Ponyville because she thinks the Mare in the Moon is just an "old pony's tale."

In the town hall, Mayor Mare announces the beginning of the Summer Sun Celebration, but Princess Celestia is absent. Nightmare Moon steps out of a glowing blue fog and addresses the cowering ponies:

"Am I not royal enough for you? Don't you know who I am?"
— Nightmare Moon

Twilight Sparkle: Take a note please, to the Princess.
Spike: Okie dokie.
Twilight Sparkle: My dearest teacher, my continuing studies of pony magic have led me to discover that we are on the precipice of disaster!

Rarity: Oh my stars, darling! Whatever happened to your coiffure?
Twilight Sparkle: Oh, you mean my mane? Well, it's a long story. I'm just here to check on the decorations, and then I'll be out of your hair.
Rarity: Out of my hair? What about your hair?

Pinkie Pie: What kind of welcome party would this be if it were quiet? I mean, duh, bo-ring. You see, I saw you when you first got here, remember? You were all, hello, and I was all, [gasp], remember? You see I never saw you before, and if I never saw you before that means you're new, 'cause I know every pony, and I mean every pony in Ponyville, and if you're new, then it meant you haven't met anyone yet, and if you haven't met anyone yet, you must not have any friends, and if you don't have any friends then you must be lonely, and that made me so sad, and I had an idea, and that's why I went [gasp], "I'll just throw a great big ginormous super-duper spectacular welcome party and invite everyone in Ponyville." See? And now you have lots and lots of friends!

Spike: Hey Twilight! Pinkie Pie's starting "pin the tail on the pony"! Wanna play?
Twilight Sparkle: No! All the ponies in this town are crazy! Do you know what time it is?!

Nightmare Moon: Why, am I not royal enough for you? Don't you know who I am?
Pinkie Pie: Ooh! Ooh! More guessing games! Um...Pokey Smokes! How about Queen Meanie? No! Black Snooty! Black Snooty— [muffled noises]

Nightmare Moon: Remember this day, little ponies, for it was your last. From this moment forth, the night will last forever! 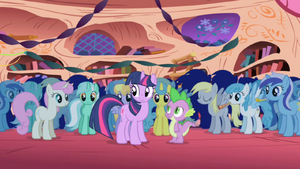