In this episode, Twilight Sparkle and her new friends travel to the Castle of the Two Sisters to retrieve the Elements of Harmony in the hope of stopping Nightmare Moon from taking over Equestria.

The plot of the storybook Friendship is Magic, included in the Friendship Is Magic Gift Set and Pony Friends Forever Pony Scooter Friends Daisy Dreams & Rarity bundles, is similar to the plot of the series' two opening episodes.

The scene when the Mane Six meet Steven Magnet gets reused in A-Dressing Memories as an example to why Rarity is so generous.

The Laughter Song and its scene reappears in Cakes for the Memories.

The manticore scene reappears in Memnagerie.

The scene when Applejack saves Twilight from the cliffside reappears in Harvesting Memories.

The scene when Celestia reassigns Twilight's studies to Ponyville, and the one when Twilight discovers the Elements of Harmony and defeats Nightmare Moon reappears in Memories and More.

At the Golden Oak Library, Twilight Sparkle and her friends find a book about the Elements of Harmony. They learn that the elements of kindness, laughter, generosity, honesty, and loyalty are known, but the sixth is a mystery. The book also says that the Elements are stored in the royal sisters' ancient castle in the Everfree Forest. The ponies decide to look for the Elements but are unaware that Nightmare Moon has been listening to their conversation the whole time.

The cliff: element of honesty

"What I'm sayin' to you is the honest truth. Let go, and you'll be safe."
— Applejack

The ponies enter the Everfree Forest. When they are walking on a mountainside, a cloud of purple smoke triggers a landslide. Fluttershy and Rainbow Dash catch Rarity and Pinkie Pie, but Twilight slides to the edge of a steep cliff. Applejack assures Twilight that she will be safe if she lets go of the cliff. Twilight lets go, and Rainbow Dash and Fluttershy catch her.

The manticore: element of kindness

"Sometimes we all just need to be shown a little kindness."
— Fluttershy

An angry manticore confronts the ponies. When the other ponies try to forcefully subdue it, Fluttershy tells them to stop. She kindly approaches the manticore. It shows her a thorn stuck in its paw. She removes the thorn and the grateful manticore licks her mane. The thorn dissolves into purple smoke, which zooms away.

The forest: element of laughter

"You'll see that they can't hurt you; just laugh to make them disappear!"
— Pinkie Pie

The cloud of purple smoke makes monstrous faces appear on the trees around the ponies. All the ponies except for Pinkie are scared. Pinkie sings the Laughter Song and teaches her friends to laugh at their fears. The friends' laughter turns the trees back to normal.

The sea serpent: element of generosity

"I simply cannot have this crime against fabulosity go uncorrected!"
— Rarity

The Shadowbolts: element of loyalty

The ponies enter the castle ruins and find five stone orbs, which Twilight believes are the first five Elements of Harmony. Nightmare Moon creates a purple whirlwind that teleports Twilight and the orbs to another tower. Nightmare Moon and Twilight face off, resulting in Nightmare Moon shattering the orbs in front of her. The five ponies run into the hall and comfort Twilight. Twilight realizes that the spirits of the Elements are present, and she explains how her friends represent the elements of honesty, kindness, laughter, generosity, and loyalty. The fragments of the orbs begin to circle the friends. A stone orb magically appears over Twilight, and she declares:

"You see, Nightmare Moon, when those Elements are ignited by the... the spark, that resides in the heart of us all, it creates the sixth element: the element of... magic!"
— Twilight Sparkle

The orb fragments form golden jeweled necklaces on the five friends' necks, and Twilight's orb becomes a crown. The Elements glow and the ponies are lifted into the air. A rainbow-colored double helix envelopes Nightmare Moon, and the room is flooded with light. When the light fades, the friends discover that the gems on their necklaces resemble their cutie marks, and Rarity's tail has magically grown back.

Princess Celestia appears with the sunrise and explains that Twilight had the magic to defeat Nightmare Moon as long as she let true friendship into her heart. Nightmare Moon returns to her original form, Princess Luna. The friends learn that Luna is Celestia's younger sister, and the sisters reconcile and reunite after one thousand years of separation.

Back in Ponyville, Pinkie throws a party to celebrate the royal sisters' reunion. When Twilight tells Celestia that she doesn't want to leave her new friends, Celestia gives her a new mission: to continue studying the magic of friendship in Ponyville and report back her findings. Twilight promises to study harder than ever, much to the delight of her new friends and the citizens of Ponyville.

Applejack: We're stickin' to you like caramel on a candy apple.
Pinkie Pie: Especially if there's candy apples in there. What? Those things are good!

Twilight Sparkle: Oh, Rarity, your beautiful tail!
Rarity: Oh, it's fine, my dear. Short tails are in this season. Besides, it'll grow back.
Rainbow Dash: So would the mustache.

Nightmare Moon: You still don't have the sixth Element! The spark didn't work!
Twilight Sparkle: But it did! A different kind of spark. I felt it the very moment I realized how happy I was to hear you, to see you, how much I cared about you. The spark ignited inside me when I realized that you all... are my friends! You see, Nightmare Moon, when those Elements are ignited by the... the spark, that resides in the heart of us all, it creates the sixth element: the element of... magic! 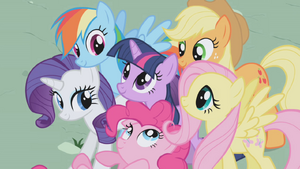