Gabby, short for Gabriella, is a female griffon, supporting character, and member of the Cutie Mark Crusaders who first appears in the season six episode The Fault in Our Cutie Marks.

In The Fault in Our Cutie Marks, Gabby meets the Cutie Mark Crusaders, holding a deep desire to get her own cutie mark.

Working as a mail delivery griffon in Griffonstone, Gabby has always felt different from other griffons in that she tries to spread cheer through her deliveries—with little success. When Pinkie Pie and Rainbow Dash arrived in Griffonstone during the events of The Lost Treasure of Griffonstone, Gabby observed them helping Gilda with a friendship problem. Reasoning that Pinkie and Rainbow's desire to help others is tied directly to their cutie marks, Gabby becomes obsessed with getting a cutie mark of her own.

While delivering a letter from Gilda to Rainbow Dash, Gabby speaks with several ponies in Ponyville about their cutie marks, and they refer her to the Cutie Mark Crusaders. At first, Gabby believes they can magically give her a cutie mark. But after consulting with Twilight Sparkle, they tell her that the chances of a griffon getting a cutie mark are very slim. Nevertheless, Gabby remains hopeful and resolves to be the first griffon to get a cutie mark.

During the song Find the Purpose in Your Life, Gabby, at the Crusaders' urging, tries numerous activities around Ponyville, helping several ponies in the process. As she demonstrates tremendous talent at each activity, the Crusaders realize it would be impossible to choose a single thing as her special talent. They tell her the harsh reality of her situation, and she flies off in tears.

When Gabby returns to the Crusaders' clubhouse, she reveals that she got a cutie mark of a cauldron, perceived as a talent for mixing potions. However, her cutie mark is revealed to be fake when she falls in a mud puddle. Gabby explains that she lied about getting her cutie mark to make the Crusaders feel better after they failed to help her. Realizing that Gabby demonstrated the same helpfulness during her song, they realize that her special talent and purpose in life is helping others, just like them.

With this in mind, the Crusaders carve cutie marks for Gabby out of wood and welcome her as the first griffon member of the Cutie Mark Crusaders. As Ponyville throws her a cute-ceañera, she vows to bring Cutie Mark Crusader values to the rest of Griffonstone.

In Forever Filly, a picture of Gabby appears on a wall in the Crusaders' clubhouse alongside pictures of other ponies whose cutie mark problems they helped with.

In The Last Crusade, Gabby appears among the characters the Cutie Mark Crusaders helped at their Appreciation Day parade. A design of her feathers appears on Auntie Lofty's quilt. She also makes a cameo appearance in Between Dark and Dawn flying beside Gilda during Lotta Little Things.

In Dragon Dropped, Gabby is revealed to have become pen-pals with Spike after her first visit to Ponyville. And since Grampa Gruff demands regular updates from Gallus, she now visits Ponyville regularly, allowing her and Spike to hang out often. When a jealous Rarity's attempts to get more time with Spike make it look like Spike doesn't want to hang out with her anymore, Gabby almost breaks off their friendship. Fortunately, the repentant Rarity patches things up between them.

In The Ending of the End - Part 2, Gabby takes part in the final battle against Queen Chrysalis, Lord Tirek, and Cozy Glow. In The Last Problem, Gabby attends Twilight Sparkle's coronation ceremony. She also briefly appears in Fluttershy's group shot during The Magic of Friendship Grows.

In a My Little Pony Friendship is Magic group message video, Gabby is amused by Apple Bloom's joke about Gilda getting a cutie mark.[3]

GABBY is a mail Griffon and honorary Cutie Mark Crusader—she can't get a cutie mark of her own, so her friends hoofmade custom mail clips with the Crusader mark for her!

Gabby is portrayed in her debut episode as very cheerful and excitable, prone to fits of elated squealing and cheering. Unlike most griffons, who are perceived as unfriendly, short-tempered, and greedy, Gabby is kind, considerate, and helpful. She enjoys helping others purely for the sake of it, and despite the discouragement of being unable to get a cutie mark of her own, she goes out of her way to cheer up others whom she believes to be feeling down.

Gabby also thinks very highly of the Cutie Mark Crusaders, using such language to describe them as "world-famous" and "wonderful".

Gabby highly values her friendship with Spike, openly acknowledging how much they have in common. When Rarity invites him to a Power Ponies convention, she urges him to go, despite being upset at not being able to spend time with him. She is hurt when it looks like Spike had lied about not being able to spend time with her so he could hang out with Rarity, angrily breaking off their friendship. She also snarkily points out how often Rarity apologizes when she tries to explain herself.

"The Cutie Mark Crusaders! I can't believe it's really, really you!"
— The Fault in Our Cutie Marks

"I'm so excited to meet you, I could just explode! I'm Gabriella, but you can call me Gabby since we're friends now! Pleased to meet ya!"
— The Fault in Our Cutie Marks

"What do you think my mark will be? A lightning bolt? An erupting volcano? I don't care if it's a jar of marmalade! I know I'll love it, whatever it is!"
— The Fault in Our Cutie Marks

"Running away? Oh, I'm not running away. I'm just, uh, e-excited to show my lovely new cutie mark to everyone in Griffonstone!"
— The Fault in Our Cutie Marks

"I know you all tried your very best, but I guess griffons and cutie marks just don't mix. Maybe... I don't even have a special purpose."
— The Fault in Our Cutie Marks

"Crusaders forever!"
— The Fault in Our Cutie Marks

"There was this whole thing where I pretended to get a cutie mark because griffons don't get cutie marks, so Princess Twilight had Spike send a bunch of letters off to Griffonstone about the first griffon ever to get a cutie mark! Which I didn't really have."
— Dragon Dropped

"You apologize a lot."
— To Rarity, Dragon Dropped

"I have to say, after not hanging out with you, I understand why. You're kinda awesome! And I know what it's like to miss that now, too."
— To Spike, Dragon Dropped 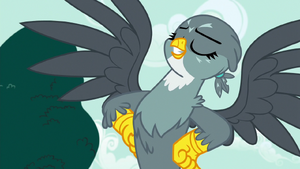