Gala Appleby is a female Earth pony and a member of the Apple family. She has a yellow coat, salmon pink mane and tail, green eyes, and a cutie mark of three apple slices. She is unnamed in the show, but she is named in merchandise and other media. She has a speaking role in Green Isn't Your Color.

Gala Appleby first appears in Friendship is Magic, part 1 during the Apple family's reunion when they meet Twilight Sparkle. She appears near the end of Friendship is Magic, part 2 with a pink coat and briefly near the beginning of Dragonshy. She has a minor speaking role in Green Isn't Your Color and appears at Princess Celestia's party at Sugarcube Corner in A Bird in the Hoof.

Gala Appleby appears at Applejack's welcome home party in The Last Roundup and several times in line for cider in The Super Speedy Cider Squeezy 6000. She also appears at both wedding ceremonies in A Canterlot Wedding - Part 2.

She watches the Summer Harvest Parade in One Bad Apple, watches Twilight's magical performance at the end of Magic Duel, attends the reunion in Apple Family Reunion, watches the goof-off between Pinkie Pie and Cheese Sandwich in Pinkie Pride, and appears with "Apple Crumble" in Simple Ways. She also appears briefly at the beginning of Trade Ya! and at the beginning and end of Twilight's Kingdom - Part 1.

She appears very briefly walking behind Twilight in The Perfect Pear.

On My Little Pony: Friendship is Magic Issue #5 page 7, Gala Appleby appears in a nightmare that Applejack has. In Issue #85, she appears in Applejack's flashback.

Gala Appleby is a playable character in Gameloft's mobile game. Her in-game description states, "Give Gala Appleby the countryside anyday -- it always beats the city! This cheeky slice of the Apple family pops up anywhere there's a shindig!"

In Enterplay's collectible card game, Gala Appleby is named on her own card α #21 R, which lists the quote "Sweet Apple Acres is the place for me... Keep Manehattan, just give me that countryside!"

"It's Fluttershy!"
— Green Isn't Your Color

"Last one in's a rotten apple!"
— My Little Pony: Friendship is Magic Issue #85

"Sweet Apple Acres is the place for me... Keep Manehattan, just give me that countryside!"
— Enterplay collectible card game α #21 R card of Gala Appleby 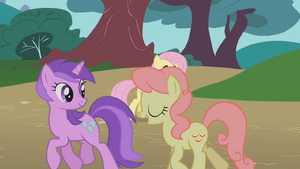