My Little Pony Friendship is Magic Wiki
Register
Don't have an account?
Sign In
Advertisement
in: Season 3 episodes
English

Games Ponies Play is the twelfth episode of the third season of My Little Pony Friendship is Magic and the sixty-fourth episode overall. In this episode, Twilight Sparkle and her friends welcome the Equestria Games inspector to the Crystal Empire. The title of this episode alludes to the 1964 bestselling book, Games People Play, but the idea of a sports competition is closer to the 1980 television series of the same name.

This episode and Just for Sidekicks take place simultaneously, with the former focusing on Twilight Sparkle and her friends welcoming the Equestria Games inspector to the Crystal Empire and the latter focusing on Spike taking care of the main cast's pets.

On July 11, 2012, layout supervisor Tim Stuby posted online a sketch of Rainbow Dash, as she appears after returning from her collision with the Crystal Empire spa in this episode, with the text "please make rd look more like a hobo. ty."[2][3] In early January 2013, he stated on Twitter that "312 has a new title".[4]

The premise of this episode was inspired by the fourth BBC sitcom Fawlty Towers episode The Hotel Inspectors.

During the week leading up to the episode's scheduled premiere, story editor Meghan McCarthy wrote on Twitter that the original name for a new character introduced in the episode was Ms. Peachbottom.[5]

On the DVD My Little Pony Friendship is Magic: Princess Twilight Sparkle, the episode's voice credits are different, being the same as those of Keep Calm and Flutter On but with John de Lancie credited as John Delancie.

On December 7, 2013, the episode's writer Dave Polsky was asked "Was there a point in drafting or wherever that the ending of Games Ponies Play made sense?" and replied "There was an unfortunate mix up on that episode, that would have been caught were the sched not so tight. That's all I'll say."[6]

Preparing for the Games Inspector

Twilight Sparkle and her friends Applejack, Fluttershy, Pinkie Pie, Rainbow Dash, and Rarity leave their pets behind with Spike during their trip to the Crystal Empire. They talk about how excited the Crystal Ponies are about hosting the Equestria Games, which Rainbow Dash describes as the "biggest sporting event in all of Equestria." Rainbow Dash says that Cloudsdale should have hosted the Games one year, but Fillydelphia was chosen instead. She is determined that the Crystal Empire host the Games, especially after they lost a thousand years to an evil king's curse. On the train, the friends practice a cheer to perform for the Games Inspector. Twilight is worried because the Inspector is known for "putting folks through the wringer on her visits."

Twilight and her friends arrive at the Crystal Empire, which Crystal Ponies are sprucing up for the Inspector's visit. They meet Princess Cadance in a spa, where she is waiting to get her hair done in a traditional ceremonial headdress. The ponies enjoy the spa's services while they wait.

A messenger arrives to tell Princess Cadance that her mane-stylist has come down with the flu. None of the other hairdressers know how to style the ceremonial headdress, but Rarity offers to attempt the procedure. The messenger adds that the Inspector, Ms. Harshwhinny, will be arriving in fifteen minutes.

As everyone begins to panic, Twilight calms herself and takes charge of the situation. She tells Rarity to have Cadance back at the castle when the headdress is done, and leads the rest of her friends to the train station, telling them to be on the lookout for a pony with flower print luggage. Rainbow Dash is certain that the Inspector's early arrival is part of a plan to "psych [them] out."

A green-maned mare carrying a floral print bag steps off the train. Believing her to be the Games Inspector, Twilight and her friends welcome her. She warms up to them, and is thrilled by the fact that Princess Cadance organized such a welcome for her. As they head to the castle, a formally-dressed pony carrying a floral print bag waits impatiently on the train platform.

At the spa, Rarity discovers that skipping a step in the headdress preparation, which she did to save time, has messed up Cadance's mane.

Meanwhile, Twilight and her friends show the Inspector the castle. The Inspector seems to be both claustrophobic and altocelarophobic.[note 1] She is eager to go outside and stretch her legs, but not before Twilight and her friends perform their elaborate cheer to properly welcome the Inspector to the Crystal Empire. She applauds and is surprised that Princess Cadance even knows her. Twilight's friends decide to show the Inspector around the castle, even though they've hardly explored the castle themselves. Twilight goes to check on Cadance. On her way to the spa, she passes by the formally-dressed pony, who is splashed with mud when a cart passes by. Twilight arrives at the spa, but Rarity won't let her see Cadance because she needs more time to fix her huge mistake.

"We got the wrong pony?!"
— Rainbow Dash

Ms. Harshwhinny walks over and tells Cadance there wasn't a welcome for her at all. Rainbow Dash confesses to the princess that they welcomed the wrong pony. However, Ms. Harshwhinny changes her mind when Ms. Peachbottom tells her about the warm reception that Twilight and her friends gave her.

"The next host of the Equestria Games is... the Crystal Empire!"
— Princess Cadance to the Crystal Ponies

The Crystal Ponies' exhilaration super-charges the Crystal Heart, and it shoots a beam of light into the sky that bursts into an aurora of colors.

As Twilight and her friends wait for the train back to Ponyville, Rainbow Dash basks in the satisfaction of helping the Crystal Empire win the competition and says she looks forward to coming back to watch the Games. Just before Fluttershy boards the train, she sees a cart of luggage fall over as a green jewel flies by.

Rainbow Dash feels sorry that Spike had to miss out on everything, but Twilight is sure that he's having plenty of fun taking care of their pets back home. Applejack hears something growling and asks her friends if they can hear it as well.

The camera pans down to show Spike, the Cutie Mark Crusaders, and the six pets hiding nervously under the seats, revealing the climax of the events in Just for Sidekicks.

Twilight Sparkle: Princess Cadance is counting on us to do our part to convince the Games Inspector to choose the Crystal Empire. And we are not gonna let her down. Are we?
Pinkie Pie: Nooooooooo! What? I was just answering Twilight's question.

Twilight Sparkle: I need to speak to the Princess.
Rarity: You can't! You mustn't! She's in the middle of a delicate conditioning rinse that must go perfectly if there's to be any hope for her hair!
Twilight Sparkle: Come on, how bad can it be?
Rarity: Imagine her mane turned into a porcupine.
Twilight Sparkle: Ew.
Rarity: Please, I will bring her back from the brink of tragedy, but you have got to buy me some time! There's no other way!

Pinkie Pie: So, you see this here? This, um, this is um, a big, round room. It's known for its roundness, and bigness, and did I mention that it's round?
Ms. Peachbottom: I think they call it a rotunda...? A small, confining, rotunda...
Pinkie Pie: [blows raspberry] Whatever. Round is round, am I right?

Rainbow Dash: We got the wrong pony?!
Pinkie Pie: NOOOOOOOOOOO! I mean, YEEEEEEESSSSSSSS! 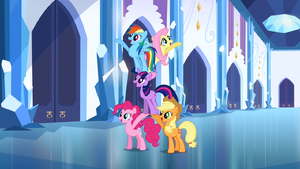