Garble is a male teenage dragon and Smolder's older brother. He first appears in Dragon Quest as the leader of a gang of dragon bullies that Spike encounters. He is not named in Dragon Quest, but he is named in the episode's script,[2] in Gauntlet of Fire and other episodes onward, and in other materials.

Garble is a tall teenage dragon with dull red scales, yellow underbelly, pinkish freckles, and yellow spikes which end in a webbed crest on his head similar to those on the helmets of Princess Luna's royal guards. His eyes are yellow with purple pupils, and he has yellow, slightly torn wings.

Garble appears as the main antagonist of Dragon Quest and is first seen fighting another dragon. As Spike confronts the gang, they start mocking him for being such a young dragon. Garble challenges Spike to a belching contest to prove he is not pathetic, but he ends up coughing a letter from Princess Celestia, and Garble throws it in the lava.

He then challenges Spike to tail wrestling. He wrestles "Crackle's cousin," who is really Twilight Sparkle, Rainbow Dash, and Rarity in disguise. Garble declares Spike the winner after their "wrestle," and he begins to take back his mocks at Spike and calls him a "real dragon." When Spike starts acting cocky, Garble chooses another dragon for Spike, one of which has an enormous and dangerous tail. Spike gets thrown to the wall and loses.

Afterwards, he challenges Spike to a game of "King of the Hoard," where he must knock Garble and other dragons off a pile of gems to be on the top. Other dragons fight their way up to the top too, but Garble throws each off to keep his place. Spike accidentally pushes Garble over, and he falls off the pile. Spike, after declaring himself the winner, falls off the pile and Garble calls it another fail.

Garble challenges Spike and the other dragons to one last game: Lava Cannonball. He announces that whoever makes the biggest splash is the ultimate dragon. He dives first, followed by more dragons. Garble torments Spike for being too afraid to jump off, but he ultimately does. Spike makes a belly flop onto the lava and impresses Garble and the other dragons for living through the belly flop, calling him a "tough little dragon."

For his effort, Garble dubs Spike "rookie dragon," and he accepts him as one of their own. He gives Spike a noogie as an initiation ritual, and has a party to celebrate Spike's addition to their horde. Garble says Spike should stay, and learn what he can do as a dragon that he couldn't do in Ponyville.

Garble offers Spike to go on a dragon raid, where they will steal from a nest of phoenix eggs. Garble instructs Spike that he, as a rookie dragon, must lure the parents away from the nest. After Spike lures them away, Garble looks inside the nest to find the eggs have already hatched.

He tries to take the hatchlings, but fails as they manage to get away. He and two other dragons from his gang chase the hatchlings, and he unintentionally causes an egg to fall from the nest. The phoenix parents find out about Garble's raid, and they get their hatchlings back. As the phoenixes are flying away, Garble tries to stop them, but the male phoenix counter-attacks and knocks him and his friends into a tree. They fly back to the nest to find Spike holding the egg Garble knocked down earlier. He is impressed by this, and tells Spike to smash it. Spike refuses, and Garble is angry that he said "no" to him. Garble and the two other dragons close in on Spike, but Twilight, Rainbow Dash, and Rarity come and threaten the dragons if they try to hurt Spike. Garble and his friends laugh at this, completely unafraid at the ponies' threat. He asks Spike if these are really his friends, and he proudly answers yes, and even insults him and tells him to back off. Garble is annoyed as Spike runs away from him, so he and his friends chase the ponies, but they get away and Garble and his friends crash into another tree.

Garble appears again in Gauntlet of Fire as a minor antagonist, still harboring a low opinion of both Spike and ponies in general. He is summoned to the Dragon Lands by the call of the Dragon Lord to take part in the Gauntlet of Fire, the winner of which will be crowned the new Dragon Lord. Garble wishes to be the Dragon Lord so he can get revenge on the ponies who crossed him, intending to lead the dragons in looting and burning down Equestria.

Throughout the Gauntlet, Garble mocks Spike for his small stature and pony-like characteristics. However, he under-performs at multiple times during the race. In the final dash for the bloodstone scepter that decides the winner, Garble faces both Spike and his partner Ember. As a result of their teamwork, Garble loses. As punishment for his actions, Spike—the winner and temporary new Dragon Lord—commands him to go home and hug every dragon he passes along the way without disclosure, much to Garble's humiliation.

In Celestial Advice, Garble appears in a simulation produced by Twilight. He meets Starlight Glimmer and has a hard time trying to pronounce her name. He then holds onto her and dives into the lava with her.

In Shadow Play - Part 1, Garble appears using Flash Magnus' shield as a gorge-surfing board. Unwilling to give up the shield, he challenges Spike to a gorge-surfing race for it. Spike beats Garble over the finish line, but rather than relinquish the shield, he attempts to attack Spike instead. Rainbow Dash intervenes and tricks Garble into relinquishing the shield by challenging him to another race and convincing him to put the shield down to fly faster. As Garble flies the race, Rainbow and Spike fly away with the shield.

Garble is indirectly mentioned by Smolder in Molt Down when she tells Spike of the pungent smell her brother acquired when going through the molt effect.

Garble appears in Sweet and Smoky, revealed to be Smolder's older brother. When Spike, Smolder, and Fluttershy travel to the Dragon Lands for dragon hatching season, Garble picks on Spike as he always does, but his friends mention that he has been mopey lately, and he rejects Spike's efforts to befriend him. It is later revealed that Garble is secretly a beat poet who hides his passion for poetry from his friends for fear of being mocked, and picks on Spike so his friends won't pick on him (which both Fluttershy and his sister scold him for). With Smolder and Fluttershy's encouragement (and some unintentional inspiration from Spike), Garble uses his poetry to help in hatching the dragon eggs.

Garble also appears in Between Dark and Dawn during Lotta Little Things. In The Ending of the End - Part 2, Garble takes part in the final battle against Queen Chrysalis, Lord Tirek, and Cozy Glow. In The Last Problem, he briefly appears in Rarity's group shot during The Magic of Friendship Grows.

Garble appears in a photograph in episode 3 of Rarity's Peek Behind the Boutique, "Customer Critiques".

In a British magazine's "5-page magical story" version of Dragon Quest, the story's narration refers to Garble by name on page 4.

In the Signature My Little Pony magazine issue 69 comic Daring friends and the missing story!, Twilight Sparkle and Starlight Glimmer travel to the Dragon Lands in search of A.K. Yearling's long-lost manuscript and ask Garble for help, but he refuses.[3]

GARBLE is the teenage leader of a gang of fire-breathing dragons who challenged Spike to a series of trials to test his mettle. But these bad-natured bullies didn't take into account Spike's friends, who defended him using the power of friendship!

GARBLE is a rude teen Dragon who's got a beef with Spike. Is Garble jealous that Spike has the best friends ever? Probably. Or perhaps Garble just needs a big ol' hug. Try giving him one, but be careful of his nasty fire breath.

Garble is a playable character in Gameloft's mobile game. His in-game description states, "Every time Spike and his friends visit the Dragon Lands, this hothead goes out of his way to push them around! It's too bad dragon culture doesn't have therapists, really." He also has a story role in the "Cold Front" group quest, in which the Dragon Lands are hit by a blizzard.

Garble appears on the Chaos is Magic and Season 2 posters.

Pages 57 and 177 of Little, Brown's My Little Pony Friendship is Magic official guidebook My Little Pony: The Elements of Harmony refer to Garble by name.

On the DVD My Little Pony Friendship is Magic: Season Two Disc 4, the closed captions for the episode Dragon Quest refer to Garble by name.

Garble is portrayed as rude, arrogant, and brutish. He harbors a deep resentment and superiority complex toward ponies, and he frequently belittles and threatens Spike due to his relationship with ponies as well as his young age. He is also considerably malicious in some of his actions and thoughts, showing no concern for phoenix eggs and wishing to burn Equestria to the ground. Despite this, he is also somewhat dimwitted, easily outsmarted by Spike and his friends.

In Sweet and Smoky, Garble is revealed to have a creative side, which he expresses through his secret passion for beat poetry. He keeps this side of him secret from his friends and picks on Spike to avoid being picked on himself. When Smolder, Fluttershy, and Ember encourage Garble's poetry when it helps the dragon eggs hatch, he comes to embrace it.

Despite his generally unpleasant demeanor toward others, Garble has a positive and friendly relationship with his sister Smolder, as shown in Sweet and Smoky.

"Well, if you weren't just hatched, how come we haven't seen you around before?"
— Dragon Quest

"Ponyville? That explains it! I knew there was something vaguely pony-ish about you! If I didn't know any better, I'd say you were part pony!"
— Dragon Quest

"Ha! Get this, guys! Spike's pen-pals with a namby-pamby pony princess!"
— Dragon Quest

"Are you sure your pony friends didn't give you a pony name?"
— Gauntlet of Fire

"When I'm in charge, the first thing I'll do is get revenge on those puny ponies! They'll regret they ever crossed Garble! We'll take whatever we want from Equestria and burn the rest!"
— Gauntlet of Fire

"I'm sick and tired of you two helping each other! Dragons don't do helping!"
— Gauntlet of Fire

"Awww! But that'll be super embarrassing!"
— Gauntlet of Fire

"Come on, little pony, if you're a real dragon you'll get up a good flame burp."
— My Little Pony: Friends Forever Issue #14

"That was pathetic. I was right. You are a pony after all."
— My Little Pony: Friends Forever Issue #14

"What are you doing here, PONY? I ain't gonna help no PONY, not now, not ever."
— Signature My Little Pony magazine issue 69 comic Daring friends and the missing story![3] 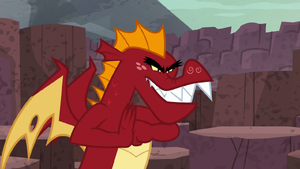