Gauntlet of Fire is the fifth episode of season six of My Little Pony Friendship is Magic and the one hundred and twenty-second overall.

In this episode, Spike takes part in a perilous Gauntlet for the title of Dragon Lord in order to protect his friends.

Two weeks prior to the episode's premiere, an April Fool's Day post featuring the Dragon Lands was posted on the My Little Pony Facebook page on April 1, 2016.[1]

The episode opens with Rarity mining for gems in an underground cavern, with Spike serving as her gem basket holder and "bodyguard". Rarity wishes to collect gems without waking up a sleeping colony of bats. Unfortunately, Spike unexpectedly starts glowing, much to Rarity's fear. As he scratches himself uncontrollably, the bats wake up and swarm over him and Rarity.

Call of the Dragon Lord

As Twilight Sparkle, Princess Celestia, and Princess Luna enjoy a relaxing get-together at the Castle of Friendship, Rarity storms in with Spike, who moans over his glowing and burning scales. Celestia and Luna explain that this phenomenon is the "call of the Dragon Lord", indicating that the Dragon Lord is beckoning all dragons to the Dragon Lands, and that the only way to stop the glowing is to answer the call.

Rarity is nervous about Spike journeying to the Dragon Lands after their past encounter with Garble, so Spike asks Twilight and Rarity to go with him. Twilight eagerly accepts, excited about the prospect of learning more about dragon culture and customs. Considering how dangerous the Dragon Lands are to ponies, Celestia warns the three to be cautious.

In the rocky heart of the Dragon Lands, Spike arrives to a large assembly of dragons—with Twilight and Rarity disguised as a large rock. Spike also meets Garble again, who is just as arrogant and condescending toward ponies as the last time they met.

The current Dragon Lord Torch and his daughter Princess Ember appear before the dragons. Torch tells them it is time for him to step down and a new Dragon Lord to be chosen in a competition called the Gauntlet of Fire. The competition is a treacherous race to claim a bloodstone scepter from a volcano.

With the call of the Dragon Lord answered, Spike stops glowing. Since he has no desire to be Dragon Lord, he starts to leave, but Dragon Lord Torch stops him. When Princess Ember notes how small Spike is compared to the other dragons, Torch begrudgingly allows him to drop out of the competition. However, when Ember expresses a desire to compete herself, Torch forbids it.

Some of the dragons discuss their plans for when they become Dragon Lord. Garble in particular intends to get revenge on the ponies who crossed him before, saying they will "take what [they] want and burn the rest." Realizing how much danger Equestria would be in if any of the competitors win, Spike decides to enter the Gauntlet of Fire and win it himself, even if being crowned Dragon Lord means he has to stay in the Dragon Lands.

The Gauntlet of Fire

In the first leg of the Gauntlet, the competitors are tasked with navigating water geysers and flying toward the volcano island. Because Spike doesn't have wings, he is forced to swim to the island. When one of the competitors falls into the water and sinks, Spike saves them from drowning and carries them to the island. This competitor is revealed to be Princess Ember in disguise, determined to show her father that there is more to being a leader than strength and size.

When Ember discovers Twilight and Rarity hanging around Spike and that they are his friends, she is disdainful, saying "dragons don't do friends." When Garble approaches and picks up the ponies' scent, Ember keeps him from discovering them. In return, Spike keeps Garble from discovering Ember's true identity. He also proposes that they work together to navigate the Gauntlet's obstacles. Rarity is uncertain about teaming up with Ember, but Spike believes she can be trusted.

Hesitantly, Ember agrees to team up with Spike, and together they navigate the obstacles to the next leg of the Gauntlet. Realizing that she only made it this far with Spike's help, Ember decides to work together with him a little longer. Through their teamwork, they make it through a tunnel of stalagmite and crystal traps. As Twilight and Rarity congratulate them on making it through, Spike saves Rarity from falling into a lava pool. Ember asks why Spike would risk everything to save her, and Spike says "that's what friends do". Because of their differences in philosophies, Ember decides to end her partnership with Spike and navigate the rest of the Gauntlet of Fire by herself.

"There's only one winner, one scepter, and one Dragon Lord. So I guess it's every dragon for themselves."
— Princess Ember

As Spike, Twilight, and Rarity continue through the maze-like volcanic tunnels, Spike is dejected by Ember's sudden abandonment. Though Rarity believes it to be for the best, Spike is still convinced that there is good in Ember.

After walking for some time, Spike and his friends make it to the center of the volcano, where the bloodstone scepter waits to be claimed. Unfortunately, Garble is right behind him. Before he drops Spike into a rock pit, Ember swoops in to Spike's rescue, admitting to herself that the two of them are indeed friends. While Ember holds off Garble, Spike goes to retrieve the scepter.

Garble: I am sick and tired of you two helping each other! Dragons don't do helping!
Princess Ember: These dragons do!

Spike claims the bloodstone scepter just as the rest of the dragons arrive, bringing the Gauntlet of Fire to a close. For his first act as the new Dragon Lord, Spike commands Garble to go home and hug every dragon he passes along the way. He soon passes the scepter on to Ember, however, saying she will make a great leader and protect the ponies of Equestria as well as he would have.

Torch is outraged to discover that his daughter participated in the Gauntlet of Fire against his wishes, but Ember rebuts by saying it takes more than being big and strong to be Dragon Lord. Torch thus apologizes for underestimating his daughter's abilities, and Ember is officially recognized as the new Dragon Lord.

As Spike, Twilight, and Rarity make their way back home, Twilight commends Spike for not only protecting Equestria but also gaining it a new ally. Thanks to this adventure, Twilight has permission to write letters to Ember with questions about dragon culture, and Rarity is inspired to make a new line of camouflage-themed clothing.

Spike: If I had to go to the Dragon Lands, would you two come with me?
Twilight Sparkle: Oh! Oh my goodness, I'd love to! We are sadly lacking in any information on dragon culture and customs. I could research them, maybe even write an article! This could be my chance to make a great contribution to the knowledge of Equestria! [beat] And be there for Spike, heh, of course.

Rarity: [sneezes]
Spike: Uh, excuse me!
Garble: Ugh, you even sneeze like a pony!

Dragon Lord Torch: He is rather tiny, heheh. I could squish him with my pinky claw. [chuckles]
Spike: [nervous chuckle]
Dragon Lord Torch: That wasn't a joke, it was a fact. When I want you to laugh, I will say be amused!

Garble: [sniffs] Wow, you even smell like ponies. [sniffs] Or is it coming from over there? [sniffing]
Princess Ember: [gruff voice] Uh, that's just me. I, uh, robbed some ponies on my way over here.
Garble: Huh, I like your style. Have I met you before? You kind of look like--
Spike: My, uh, old neighbor! Uh, Sandy... Rockbeach!

Rarity: Oh, you made it! Oh, we were so worried!
Spike: About us? P'aw, that tunnel was cake! [groans]
[thump]
Princess Ember: Wait, how did you two get through?

Spike: Ember! I thought it was every dragon for themselves! Why did you save me?!
Princess Ember: That's what friends do! And, I am. I mean, we are. I never should have left you back there. Agh, please don't make me talk about my feelings!

Garble: [groans] [reluctantly] Dragon... Lord... Spike...
Spike: That's right! Uh... Now, go start your long journey home! And give every dragon you see on the way a hug! Don't tell them why.
Garble: Aww, but that'll be super embarrassing!
Spike: I command you to do it!
Garble: [annoyed noise] I can't believe this...

Twilight Sparkle: You did well, Spike. With Ember as Dragon Lord, the ponies will be safe and you've gained us a powerful ally.
Spike: And a new friend!
Twilight Sparkle: Plus, Ember said I could write to her anytime I had questions about dragon culture! With this much information, I'll be able to write a whole book on dragons!
Rarity: And I gained tons of new ideas for a new line of camouflage clothing! I think I'll call it "Camo-Maud"!
Rarity, Twilight Sparkle and Spike: [laughing] 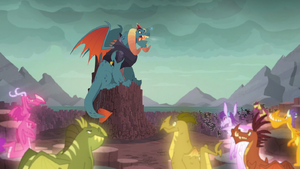