Giselle is a female background griffon in Rainbow Falls, Equestria Games, and The Lost Treasure of Griffonstone. She is unnamed in the series, but she is named in merchandise.

Giselle first appears in the season four episode Rainbow Falls as one of three griffon athletes trying out for the Equestria Games. She and her teammates appears various times throughout the episode flying across the field. They are last seen qualifying for the Games and being awarded medals of recognition among several pony teams.

Giselle appears later in Equestria Games competing in the Games, participating as her team's first flyer in the aerial relay. After taking third place in the relay, Giselle and her teammates are awarded bronze medals, and they listen to Spike butcher the Cloudsdale Anthem.

In season nine, Giselle takes part in the final battle against Queen Chrysalis, Lord Tirek, and Cozy Glow in The Ending of the End - Part 2.

In the Crystal Games expansion set of Enterplay's collectible card game, Giselle is named on card #36 C, which gives her the description "Giselle has spent years honing her air reflexes by training in canyons infested with quarray eels. Since she made it to the Equestria Games, apparently the risk is worth the reward!" 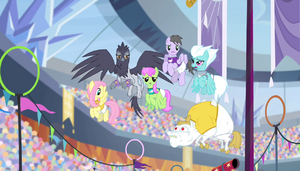