Gladmane is a male Earth pony and the antagonist of the season six episode Viva Las Pegasus. He is the former owner of a luxury resort hotel in Las Pegasus and Flim and Flam's former employer.

Gladmane appears in the season six episode Viva Las Pegasus as the owner of his own luxury resort in Las Pegasus. When first introduced to Applejack and Fluttershy, he is portrayed as friendly and philanthropic, calling himself a "friendship connoisseur" and often offering discounts to resort customers, and he has a very positive reputation among his employees. The center of the resort lobby even bears a gold statue in his likeness.

Later in the episode, however, Applejack and Fluttershy discover several of Gladmane's employees, including salesponies Flim and Flam, having heated arguments among themselves. They learn from the animals featured in one of the resort's stage acts that Gladmane deliberately causes arguments between the employees in order to keep them from leaving the resort and pursuing more lucrative and successful careers. However, the employees hold Gladmane in such high regard that they refuse to believe the notion that he is manipulating them.

In a closed-door conversation with Flam, Gladmane reveals that he intends to build resorts all over Las Pegasus and control the entire city's business market. Teaming up with Flim and Flam, Applejack and Fluttershy attempt to make Gladmane expose his true nature to everyone he has deceived. Unfortunately, he sees through the ruse and later gloats to Applejack and Fluttershy's faces. This, however, turns out to be part of a more elaborate ruse to get Gladmane to reveal himself via the loudspeaker in his office.

With a ruined business and reputation, Gladmane is disgraced out of his managerial position, allowing Flim and Flam to take over as resort co-owners.

GLADMANE once owned the Las Pegasus resort where he pit his employees against one another for sport. A bad boss like that deserves the boot! And that's exactly what Gladmane got. Now he's at home doing the high-roller hustle all by himself.

Gladmane is featured in the "Las Pegasus Quest" section of the My Little Pony: Cutie Map Quest A Punch-Out & Play Activity Book, which was released prior to his debut in the series.

"Just Gladmane'll do. And it's a pleasure to meet actual cohorts of the Princess of Friendship!"
— To Applejack and Fluttershy, Viva Las Pegasus

"My guests may be looking for lights, music, and parties, but working hard and making friends is how I turned this hotel into what it is today, and I plan to make it even bigger. Uh-huh-huh!"
— Viva Las Pegasus

"Wise ponies may say that folks that come here are customers, but I can't help but thinkin' of each and every one of you as friends."
— Viva Las Pegasus

"Thank you. Thank you very much."
— Viva Las Pegasus

"Every hotel on this strip as amazing as this one, and every one of 'em mine."
— Viva Las Pegasus

"Nopony's gonna stand in the way of my plans, no matter how rich she is! And I sure wouldn't want you to end up on the losing side."
— To Flam, Viva Las Pegasus

"I practically invented the 'High Roller Hustle'. But I suppose I should be impressed. You're the only ponies to ever figure out the secret to my success. Takes a lot of work keepin' everypony fightin'. But as long as I keep 'em convinced that I'm their only friend, all of Las Pegasus will be mine. Oh, you can't trick a confession out of a pony like me! I'm always one step ahead."
— Viva Las Pegasus 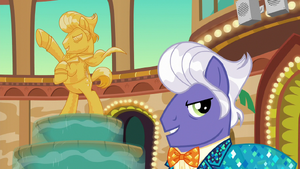 Retrieved from "https://mlp.fandom.com/wiki/Gladmane?oldid=2117158"
Community content is available under CC-BY-SA unless otherwise noted.