Globe Trotter is a male background Earth pony with a brown coat, two-tone brown mane and tail, blue eyes, and a cutie mark sometimes of a green leaf and sometimes of a palm tree on an island. He is unnamed in the show, but he is named in merchandise.

Globe Trotter's color scheme is mostly the same as those of "Concerto", "Kazooie", Tight Ship, Dr. Hooves, and Sheriff Silverstar.

Globe Trotter first appears in The Mysterious Mare Do Well as one of several passengers of a runaway carriage. In a speaking role, he advises Rainbow Dash to skip her heroic catchphrase and save them. In Putting Your Hoof Down, Globe Trotter appears as a tourist in Ponyville. He asks Fluttershy for directions to the bell tower and accidentally causes her to drop her mail in a water puddle. In anger, Fluttershy flings him toward the bell tower.

In season five, Globe Trotter appears in Manehattan in line for a food merchant's stand at a park as Applejack and Rarity try to advertise the Midsummer Theatre Revival play. He later appears in the audience for the play and subsequently conversing with other ponies brought together by the play in Made in Manehattan.

In season six, he appears at the train station for the Crystal Empire in The Crystalling - Part 1.

In season eight, he appears as part of a tour group of the School of Friendship in Molt Down.

In season nine, he appears in a crowd at the Appleloosa County Fair watching a grown-up Apple Bloom play a high-striker game in Growing Up is Hard to Do. When Apple Bloom manages to hit the bell, he and the crowd cheer for her and carry her off.

In the Canterlot Nights expansion set of Enterplay's collectible card game, Globe Trotter is named on card #42 U, which gives him the description "Globe Trotter has been to every tourist trap in Equestria. His post-vacation slideshows are notoriously endless."

"Excuse me, uh, do you think you could skip your catchphrase and just hurry up and save us?!"
— The Mysterious Mare Do Well

"Excuse me, do you know how to get to the Ponyville tower?"
— Putting Your Hoof Down

"Hey!"
— Putting Your Hoof Down 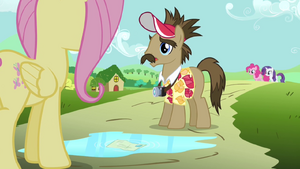