My Little Pony Friendship is Magic Wiki
Register
Don't have an account?
Sign In
Advertisement
in: Pages for merging, Pages that need improvement, Earth ponies,
and 5 more
English

For the apple and the female Earth pony, see food and beverage and Goldie Delicious.

Golden Delicious shares the same name and some varying other attributes as a G3 Earth pony mare. The name comes from the Golden Delicious apple cultivar, which is also the namesake of fellow Apple family member Goldie Delicious.

Golden Delicious is one of four Apple family members who have been depicted as unicorns, the other three being the sometimes-unicorns Red Gala, "Liberty Belle", and "Red June", and one of six Apple family ponies who have been depicted as non-Earth ponies, the other five being the aforementioned three sometimes-unicorns, the sometimes-Pegasus Peachy Sweet, and the Pegasus Issue 09 Unnamed Colt - Imagined Pegasus Foal.

Golden Delicious, as an Earth pony stallion, first appears in Friendship is Magic, part 1 when Applejack introduces Twilight Sparkle and Spike to him during the Apple family reunion.

He doesn't appear again until Apple Family Reunion, in which he attends the eponymous reunion with other Apple family members and is mentioned by Apple Rose. He takes part in the raising of the new barn at Sweet Apple Acres during Raise This Barn and appears in the family photo.

Golden Delicious appears briefly during I've Got to Find a Way in Magical Mystery Cure. He also appears at the Breezies' welcoming party in It Ain't Easy Being Breezies, is seen walking toward Flim and Flam's tent at the beginning of Leap of Faith, and briefly appears at the Rainbow Falls Traders Exchange in Trade Ya!

In Bloom & Gloom, Golden Delicious appears among other ponies fleeing from a swarm of twittermites. In Appleoosa's Most Wanted, he appears outside Sheriff Silverstar's office in Appleloosa.

Golden Delicious appears in My Little Pony The Movie during We Got This Together, as one of the ponies enslaved by the Storm King's forces, and during Rainbow.

On My Little Pony: Friendship is Magic Issue #85 page 4, Golden Delicious appears in Applejack's flashback. In My Little Pony/Transformers Issue #4, he is summoned to Sweet Apple Acres by Discord to help Applejack drive the Insecticons off the farm. On page 8, he teams up with Red Gala, Caramel Apple, Red Delicious, Granny Smith, and Apple Strudel to take down Ransack.

Golden Delicious, as an Earth pony stallion, is a character in Gameloft's mobile game. He was added to the iOS version of the game on June 4, 2014 and to the Android version of the game on June 10, 2014. His in-game description states "Golden Delicious is a stallion who loves to be treated like the golden pony he is -- first-class apple carts all the way!" The game's icon of him uses fanart.[1]

Golden Delicious appears as an Earth pony stallion in a promotional image posted by Hasbro's My Little Pony Facebook page on November 10, 2013, and a post by the same page on January 17, 2014 attributes to Twilight Sparkle the question "Who loved being introduced to Golden Delicious?"[2]

Golden Delicious, as a unicorn mare, is included as number 17 of 24 in the fifth wave of mystery pack toys and collector cards, the English-only and English/French/Spanish versions of which each list her name with a trademark symbol and state that she "loves acting like a movie star" and the English/French/German/Spanish/Portuguese/Italian/Dutch/Swedish/Danish/Greek/Polish/Turkish/Russian version of which states that she "loves acting!" As an Earth pony stallion, Golden Delicious is included in the fourteenth wave of mystery packs.

Golden Delicious, as an Earth pony stallion, appears on WeLoveFine's fan-designed art prints "All Of Apple Acres" and "Apple Family Portrait",[3] both of which are by the same artist.

In Little, Brown's reference books, Golden Delicious is listed as part of the extended Apple family tree on page 28 of The Elements of Harmony and is featured as a unicorn mare on pages 82–83 and 100 of Mini Pony Collector's Guide. Golden Delicious is also listed on Enterplay trading card series 1 card #59 of 84, Meet the Apple Family! 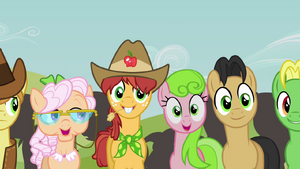