Start a Wiki
Golden Harvest, or Carrot Top, is a female Earth pony with a pale goldenrod coat, carrot orange mane and tail, dark olive green eyes, and a cutie mark of three carrots with greens. Her name is not mentioned on the show, but it appears varyingly in merchandise and other media. She has speaking roles in Boast Busters, Swarm of the Century, Green Isn't Your Color, A Friend in Deed, and It Isn't the Mane Thing About You.

Golden Harvest appears in many episodes as a background pony and has minor speaking roles in some. In party scenes such as in Green Isn't Your Color and The Best Night Ever, she wears a cyan saddle with a purple skirt underneath and a purple flower in her hair. Some running sequences, specifically in Fall Weather Friends, depict her with Lemon Hearts' running model, including blue eyes, more eyelashes, and even Lemon Hearts' cutie mark.

She appears in the crowd that cheers for Twilight Sparkle in The Ticket Master, so Pinkie Pie can get her spare ticket to the Grand Galloping Gala. After actually learning that Twilight has an extra ticket, she tries to do favors for Twilight, along with the rest of the ponies, and gives chase after Twilight when she runs. She is toppled out of the running mob and later points out where Twilight is running off to.

She also appears in Boast Busters with her orange mane at the beginning, then is later seen in the background with a moss-green mane after Trixie makes Rarity's mane slime-green. When Rarity cries out how awful green is, Golden Harvest, insulted, snorts "Well, I never!". In Swarm of the Century, she puts up a banner with another pony for the upcoming arrival of Princess Celestia. Twilight asks her why the name on the banner is shortened to "Welcome Princess Celest," and she tells Twilight they ran out of space. She is then told to take it down and rewrite the name.

Golden Harvest also participates in the Running of the Leaves in Fall Weather Friends, at first wearing the number 00, then later the number 10. For most of her running scenes during the race, her mane style changes to look like that of Lemon Hearts' or Twinkleshine's. Golden Harvest also has Rarity's eye style, eye shadow, and eye color in those scenes.

In Over a Barrel, she appears in Appleloosa wearing a light green, white-banded, dome-crowned cowboy hat. She jumps out of the second story of a building, lands on a buffalo, and rides him rodeo-style with a big grin on her face during the showdown. She also makes an appearance in Green Isn't Your Color, where she reads a magazine before spotting Fluttershy and sprinting after her.

In Lesson Zero, Golden Harvest falls under the spell that Twilight casts on her doll, Smarty Pants, wanting it for herself. She later fights against Minuette for its possession. In the episode Luna Eclipsed, she dresses as a devil and briefly bobs for apples along with Derpy.

In Sisterhooves Social, she partakes in the titular event with "Noi" as her partner. During the event they both wear large green bows. She appears with "Noi" during the market scene in Putting Your Hoof Down.

In The Last Roundup, she is seen with "Written Script" and "Dinky Doo". The camera focuses on them as they look gently at her. Later, Golden Harvest talks to "Written Script" at the train station when Applejack leaves for Canterlot. She then sits near the unicorn filly while inside the train. In Canterlot, she cleans aisles at a rodeo stadium and shakes her head when Twilight interrogates her about the location of Applejack.

In The Crystal Empire - Part 1, she struts through Canterlot with Jet Set during The Failure Song.

She briefly appears at the titular reunion in Apple Family Reunion, listening to Applejack and some of her relatives play Raise This Barn.

In the episodes Just for Sidekicks and Games Ponies Play, Golden Harvest is seen nuzzling "Written Script" at the Crystal Empire train station.

In Three's A Crowd, Golden Harvest appears during Glass of Water. At the airport, she stands behind "Pearly Whites" in line for the metal detector. In Pinkie Pride, she parties in Appleloosa while Cheese Sandwich monologues to Boneless. She appears throughout Pinkie the Party Planner in the Ponyville marketplace. Golden Harvest stands among the crowd of ponies during The Super Duper Party Pony and The Goof Off. Later in the episode, Golden Harvest attends Rainbow Dash's birth-iversary. In Simple Ways, Golden Harvest and a duplicate watch Mayor Mare give her speech. She then shakes Rarity's hoof and appears with "Noi" once again. Later in the episode, Golden Harvest stands alongside Berryshine at the train station. In Filli Vanilli, she attends two of the Pony Tones' performances.

In It Ain't Easy Being Breezies, Golden Harvest watches the Breezies fly, and in For Whom the Sweetie Belle Toils, she appears during and after the play. In Leap of Faith, Golden Harvest appears walking toward and inside Flim and Flam's tent. She later watches Apple Bloom publicly announce Applejack's approval, and she turns to watch Applejack confirm it. In Trade Ya!, Golden Harvest runs a trading stall with horseshoes. She then appears when Pinkie Pie tries to auction off Twilight Sparkle's books and when Twilight runs a small trial. At the end of the episode, she leaves the Rainbow Falls Traders Exchange. In Inspiration Manifestation, Golden Harvest, Applejack, and Granny Smith watch a cart transform due to Rarity's influence. Golden Harvest stands in stadium crowds throughout Equestria Games. In Twilight's Kingdom - Part 1, Golden Harvest appears as Cyrstal Pony and watched the dignitaries from Maretonia arrive. At the end of the episode, Golden Harvest watches Lord Tirek on stage, and two duplicates have their magic stolen. In Twilight's Kingdom - Part 2, Golden Harvest stands next to Minuette in the Friendship Rainbow Kingdom castle.

In Bloom & Gloom, Golden Harvest runs from a twittermite swarm. In Tanks for the Memories, Golden Harvest and a duplicate participate in the Running of the Leaves. She appears in numerous shots and at the wedding in Slice of Life, she watches a polo game in Princess Spike, she attends the friendship party in Party Pooped, and she appears in Ponyville's shared dream in Do Princesses Dream of Magic Sheep? In Canterlot Boutique, she briefly appears at the Canterlot train station. In Brotherhooves Social, she participates in the Sisterhooves Social with "Noi" again. She also appears, somewhat obscured, in the final group shot during Friends Are Always There For You in The Cutie Re-Mark - Part 2.

Golden Harvest appears in Manehattan in The Gift of the Maud Pie, goes rafting during Out On My Own and watches the dance recital in On Your Marks, watches Trixie's show in No Second Prances, watches the Wonderbolts' performance in Newbie Dash, appears at the party and sings the lines of the reprise of the song in A Hearth's Warming Tale. In Applejack's "Day" Off, she appears in the Ponyville Day Spa. In The Cart Before the Ponies, she watches the Applewood Derby. She also appears in The Fault in Our Cutie Marks attending the baseball game and Gabby's cute-ceañera.

In Celestial Advice, Golden Harvest is one of the many ponies at the medal ceremony for Starlight Glimmer, Trixie, Thorax and Discord, and she also appears during Starlight's graduation ceremony. In A Flurry of Emotions, she attends an art show hosted by Spearhead. She laughs at Pinkie Pie in Fame and Misfortune and also appears arguing with other ponies in the end. She appears several times in Triple Threat. In It Isn't the Mane Thing About You, she has a speaking role while standing at the flower stand and appears in the crowd at Davenport's auction. She also appears at Pinkie Pie's pie party in Secrets and Pies.

In Friendship Games, Golden Harvest appears with Daisy, Cherry Berry and other ponies outside Ponyville town hall in one of the dimensional rifts opened by Midnight Sparkle.

In Forgotten Friendship, Golden Harvest appears alongside Noi at the entrance of the Canterlot library in its second establishing shot.

In My Little Pony: Friends Forever, she appears in Issue #9 and on Issue #37 page 2.

In My Little Pony: Ponyville Mysteries, she appears on Issue #5 pages 15 and 20.

Golden Harvest is featured in Rarity and the Curious Case of Charity.

Golden Harvest and Demure Pony are characters in Gameloft's mobile game. Golden Harvest was added to the iOS version of the game on June 4, 2014.[2] The game's description of Golden Harvest states, "This gorgeous golden pony loves parties, playing and most of all... her friends."

Golden Harvest, along with hosts of characters from the show, appears on the Comic Con 2011 and Season 2 posters, in both appearances smiling next to Berryshine and Minuette. Little, Brown's My Little Pony Friendship is Magic official guidebook My Little Pony: The Elements of Harmony lists Golden Harvest by name and appearance.[6]

Golden Harvest adorns a collectible trading card along with Lyra Heartstrings,[7] with the description "There's two in every crowd! Lyra Heartstrings is an excitable pony often seen bouncing and grinning at the back of the herd or lolling in the park sharing bonbons with Golden Harvest, her PFF. Golden Harvest earned the nickname Carrot Top because carrots are always on her mind. These two ponies can be found all over Equestria, enjoying various activities like jumping across rooftops, running from buffalo, and joining in musical numbers!" The cards were designed specifically with the brony demographic of older fans in mind, and the writer-consultant for the set has said the consultants submitted "at least a dozen direct fandom nods".[8] In the collectible card game, α #13 F, a card of Holly Dash, attributes to Holly Dash and Golden Harvest the respective quotes "This way! No, wait, this way! Come on!" and "Can't we walk? Just this once?"[9] In the game's expansion set Canterlot Nights, #35 C, a card of Golden Harvest, lists the quote "I've been sneaking off to Canterlot parties for years before you caught me, and I'm not about to stop now!"[10] In the game's expansion set The Crystal Games, card #94 C, Apple Juice Break, lists the quote "You've never tried Sweet Apple Acres apple juice? I'm a carrot farmer and I STILL think it's the best thing I've ever drank in my life!"

An animator working on the show noted that, coincidentally, he had given the pony the same name as some of the fans, "Carrot Top",[11] prior to the trading card's adoption of it as a nickname.

Twilight Sparkle: What happened to the rest of her name?
Golden Harvest: We couldn't fit it all in.
Twilight Sparkle: You can't hang a banner that says "Welcome Princess Celest". Take it down and try again.

"Get her off the stage!"
— Green Isn't Your Color

"What about mine?"
— It Isn't the Mane Thing About You

Rarity and the Curious Case of Charity

Golden Harvest: Well, they look stunning. They were worth the wait!
Golden Harvest: Say, Rarity, something's different about you. I can't quite put my hoof on it.

"Ten minutes to showtime, everypony!"
— Rarity and the Curious Case of Charity

"You brought them, of course."
— Rarity and the Curious Case of Charity

"Five minutes until showtime!"
— Rarity and the Curious Case of Charity

"And it seems to trees, you've spread your wings, like a Breezy in the wind..."
— Rarity and the Curious Case of Charity

"I've been sneaking off to Canterlot parties for years before you caught me, and I'm not about to stop now!"
— Enterplay collectible card game Canterlot Nights #35 C card of Golden Harvest 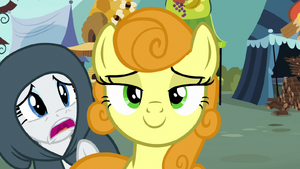 Retrieved from "https://mlp.fandom.com/wiki/Golden_Harvest?oldid=2137221"
Community content is available under CC-BY-SA unless otherwise noted.