My Little Pony Friendship is Magic Wiki
Register
Don't have an account?
Sign In
Advertisement
in: Locations, Businesses, Trees
English

The Golden Oak Library is a stocky hollowed-out tree and the home of Twilight Sparkle, Spike, and Owlowiscious in seasons one through four. In Twilight's Kingdom - Part 2, the aboveground portion of it is destroyed by Lord Tirek, and Princess Twilight subsequently gains the Castle of Friendship. The library's main reading room is on the ground floor, while the bedroom is on the second floor. There is also a basement where Twilight performs her measurements on Pinkie Pie in Feeling Pinkie Keen. It is called the Golden Oak Library in Castle Sweet Castle, (the) Golden Oaks Library or Golden Eagle Library in some merchandise, Books and Branches Library at a former Hub website, and Twilight's Library in Gameloft's mobile game.

The tree has a beehive hanging from a branch, a candlestick sign on the front door (sometimes an actual candlestick figure, depending on individual animation errors), a sign of an open book outside the door, and two balconies, one of which has a telescope.

According to Lauren Faust, the Golden Oak Library was originally called "The Tree of Knowing".[1]

According to The Art of Equestria, the Golden Oak Library draws influence from the Tree of Knowledge or Tree of Life, a common motif in various real-world mythologies.

From Lesson Zero onward, the library's interior has a new texture.

In Friendship is Magic, part 1, Princess Celestia sends Twilight Sparkle to Ponyville to supervise the Summer Sun Celebration preparations. She was supposed to stay in the library during her stay in Ponyville. The library is protected from lightning by a magical lightning rod as mentioned by Twilight in Look Before You Sleep. During the thunderstorm, Twilight has a slumber party with Applejack and Rarity and during the end of the episode, a tree falls into the bedroom through the window. In Swarm of the Century, Twilight wakes up in the morning to find the library infested with parasprites. In Sonic Rainboom, Rainbow Dash crashes into the library and knocks all the books off the shelves, making Rarity, Twilight, Pinkie Pie and Applejack organize them again.

In The Return of Harmony Part 2, Twilight keeps the Elements of Harmony in a book with hollowed-out pages in the library.

In times of difficulty, Twilight often turns to her vast library for answers. For example, in The Cutie Pox, Spike pulls out a book called Perplexing Pony Plagues to diagnose Apple Bloom's case of cutie pox.

The library also holds every entry in the Daring Do book series, as seen in Read It and Weep.

In It's About Time, when Twilight is convinced that a disaster is going to occur in the near future, she "monitors everything" in Equestria from inside the library. In Ponyville Confidential, after the Cutie Mark Crusaders spread harmful gossip around Ponyville, Twilight encases the library in a magical barrier to keep them out.

In The Crystal Empire - Part 1, Twilight magically rips the entire tree out of the ground, exposing its roots. When Twilight and Spike are searching for a way to eradicate the Pinkie Pie clones in Too Many Pinkie Pies, Spike discovers a horseshoe-shaped button hidden in the back of a bookshelf. Upon pressing it, a secret compartment containing the desired book is revealed.

In Magic Duel, Trixie uses her magic to flip the library upside down and shake books from it to the ground to persuade Twilight to have a duel with her.

In Princess Twilight Sparkle - Part 1, Rarity mentions that after the Summer Sun Celebration, she and Twilight have a meeting scheduled to redecorate Twilight's loft now that she's a princess.

In Twilight's Kingdom - Part 2, most of the library is destroyed by Lord Tirek when he attacks it in his attempt to take the princesses' combined Alicorn magic from Twilight. Twilight barely escapes with Owlowiscious before Tirek's attack razes the library.

In Castle Sweet Castle, Twilight and Spike visit the remains of the library, still in ruins after Twilight's battle with Tirek. In memory of the library, and as a means of helping Twilight feel more at home at the Castle of Friendship, Twilight's friends dig up the tree's roots and refashion them into a chandelier for the castle's throne room, adorning it with gems containing pictures of their memories together.

In Do Princesses Dream of Magic Sheep?, the library appears in Ponyville's shared dream. Twilight restores the library to pristine condition and summons a swarm of flying books from it to attack the Tantabus.

In A Royal Problem, the library's bedroom appears in a dream of Discord and the Smooze.

The library is mentioned by Twilight in The Point of No Return, as she notes that she used to live in a library.

In gaming, the library serves as the setting for the Discover the Difference game. In Gameloft's mobile game, it is called "Twilight's Library". To reflect the library's destruction in the season four finale, if any player advances far enough in the game to defeat Tirek, the library is automatically replaced with the Castle of Friendship. In Treehouse TV's Friendship Express Train Contest,[2] the library is called "Golden Oaks Library". It is also featured in Electronic Arts' Hasbro iOS app Monopoly Hotels under the same name.[3] The Club Hub area of The Hub's website calls it the "Books and Branches Library."[4]

In Sparkle World magazine, the Golden Oak Library is featured in the stories Christmas at Canterlot!,[5] Spooky Slumber Party!,[6] and Winter Wonderland![7]

The library is mentioned in the chapter book Discord and the Ponyville Players Dramarama when Twilight sees the library set of the community musical and it brings back memories.

The Golden Oak Library is featured and mentioned in Enterplay's trading cards and collectible card game Cards #7, #78, and #ƒ25 of the trading card game refer to it as "Golden Oaks Library".

In chapter books and storybooks by Little, Brown and Company, the library appears or is mentioned in Twilight Sparkle and the Crystal Heart Spell, Welcome to Equestria!, Under the Sparkling Sea, The Elements of Harmony, Pinkie Pie and the Rockin' Ponypalooza Party!, Welcome to the Crystal Empire!, and Rainbow Dash and the Daring Do Double Dare. It is also featured in the Twilight Sparkle Animated Storyteller-bundled Welcome to Ponyville and Phidal Publishing's Stuck On Stories and Golden Oak Library.

The library is featured in an 80-page manga released by Shogakukan on October 16, 2014. In one of the manga's stories, the library, sentient and capable of speech, falls in love with another talking tree.[8]

In the Swedish[9] and German[10] versions of My Little Pony: My Sound Book, the Golden Oak Library is featured; the English version refers to it the "Golden Eagle Library".[11] 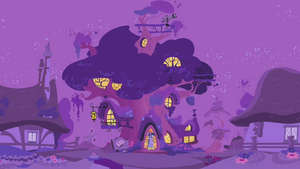