My Little Pony Friendship is Magic Wiki
Register
Don't have an account?
Sign In
Advertisement
in: Pages for merging, Pages that need improvement, Earth ponies,
and 3 more
English

Goldengrape is a male background Earth pony with a light yellow coat, blue mane and eyes, and a cutie mark of two bunches of green grapes. His name is not mentioned in the show, and it first appeared in the accompanying pamphlet of a mystery pack toy released in January 2012. He is identical to Red Delicious apart from his cutie mark, and shares his design with Noteworthy and Coco Crusoe.

In Dragonshy, Goldengrape appears in the Ponyville park with Daisy and are later warned about the smoke caused by a dragon. In Swarm of the Century, Shoeshine walks up to him in front of Sugarcube Corner. In Green Isn't Your Color, he appears talking to Daisy in Ponyville and later appears alone attending a fashion show. In Over a Barrel, he appers in Appleloosa, listening to Pinkie Pie's song and later prepares for and participates in the battle between the Appleloosans and the bison. After their conflict is resolved, he appears clearing trees for the bison. In The Cutie Mark Chronicles, he appears talking to Daisy in Ponyville. In The Best Night Ever, he and Daisy talk together while attending the Grand Galloping Gala.

In Luna Eclipsed, Goldengrape wears a mariner costume with a shark biting his backside for Nightmare Night. In Sisterhooves Social, he appears in the audience for the obstacle course of the titular event with Liza Doolots. In The Cutie Pox, as the ponies are coming out of hiding, he looks out of a house with Cherry Berry and "Tornado Bolt".In the The Mysterious Mare Do Well, he and Daisy appear in Ponyville noticing the runaway baby carriage. In Hearth's Warming Eve, he and Daisy make a cameo appearance talking in Canterlot. In Family Appreciation Day, he appears in a flashback in a line for Stinkin' Rich's Zap Apple jam stand. He and Daisy later appear in the present day in a line for the Zap Apple jam. In The Last Roundup, he walks with Noteworthy in Dodge Junction. In The Super Speedy Cider Squeezy 6000, he appears waiting in line for Apple Cider with Daisy, which runs out before they get any. They later watch the Flim and Flam's introduction and spectate the cider-making competition between the Flim Flam brothers and the Apple family. In Hearts and Hooves Day he makes a cameo appearance standing in Ponyville, looking to his right. In Putting Your Hoof Down, he appears in the Ponyville Marketplace at an asparagus stand and later attends Iron Will's assertiveness seminar. In It's About Time, he and Daisy make a background appearance talking near the Ponyville Day Spa. In Ponyville Confidential, he again appears standing by himself, looking to his right. In A Canterlot Wedding - Part 2, he attends Princess Cadance's wedding in Canterlot, first watching Queen Chrysalis walk away from the altar and later watching Princess Cadance walk up to the altar.

In One Bad Apple, Goldengrape makes a background appearance spectating the Ponyville Summer Harvest Parade. In Magical Mystery Cure, he makes various background appearance in Ponyville standing on a bridge with Daisy during Morning in Ponyville, in the mob complaining to Rarity about the weather, singing on a rooftop with other ponies during A True, True Friend, and attending Princess Twilight Sparkle's coronation in Canterlot.

Goldengrape appears in Flight to the Finish in the audience at the Crystal Empire for the flag ceremony auditions. In Three's A Crowd, an otherwise unidentified stallion whose muzzle shape and coat and eye colors match Red Delicious, Goldengrape, "Fuzzy Slippers", S01E21 Unnamed Earth Stallion #10, S05E06 Unnamed Earth Stallion #9, and "Harry Trotter" equally makes a brief appearance as a security team member during Glass of Water. Goldengrape also appears in several background shots in Pinkie Pride; moreover, he has a singing role with the chorus during Pinkie the Party Planner and, with a different cutie mark, a speaking role during The Super Duper Party Pony. He also appears in Simple Ways, Twilight Time, It Ain't Easy Being Breezies, For Whom the Sweetie Belle Toils, and Leap of Faith. In Testing Testing 1, 2, 3, he and Dr. Hooves are backup singers in Pinkie Pie's song Rappin' History of the Wonderbolts. He appears in Trade Ya!, in Equestria Games, in a flashback to Leap of Faith in Twilight's Kingdom - Part 1, and in Twilight's Kingdom - Part 2.

Goldengrape appears in The Cutie Map - Part 1 talking to Shoeshine in front of the Castle of Friendship. In Appleoosa's Most Wanted, he is a spectator at the Appleloosa Rodeo. In Party Pooped, he appears in both Ponyville and Dodge Junction. In Do Princesses Dream of Magic Sheep?, he appears in Ponyville's shared dream. In Brotherhooves Social, he appears as a Sisterhooves Social spectator. He also appears during Light of Your Cutie Mark in Crusaders of the Lost Mark, where he is pulling a cart of apples which Diamond Tiara knocks over to slow down the Cutie Mark Crusaders. In The One Where Pinkie Pie Knows, he and Lily Valley, appear talking to Daisy outside Sugarcube Corner. In The Cutie Re-Mark - Part 1, he makes a background appearance walking in Ponyville. In The Cutie Re-Mark - Part 2, he appears in an alternate timeline axing wood at the pony forest camp higgen from Queen Chrysalis.

In The Gift of the Maud Pie, Goldengrape makes a background appearance talking with Daisy in Manehattan. In On Your Marks, he appears as part of the audience for Tender Taps' dance recital. In No Second Prances, he appears talking to Twinkleshine and Sea Swirl in Ponyville, walking and whispering with Cherry Berry by Starlight Glimmer and Trixie, and later attending Trixie's magic show. In Newbie Dash, he appears in the audience for Rainbow Dash's first show with the Wonderbolts as a full-time member. In A Hearth's Warming Tail, he appears inside the Castle of Friendship during celebrations for Hearth's Warming Eve singing Hearth's Warming Eve Is Here Once Again, and later sings the reprise beside Daisy. In Applejack's "Day" Off, he makes a background appearance walking with Berryshine in Ponyville and they later appear together in the long line of ponies for the steam room at the Ponyville Day Spa. In The Cart Before the Ponies, he appears as a spectator of the first Ponyville Applewood Derby. In 28 Pranks Later, he makes a background appearance standing outside Sugarcube Corner. In Buckball Season, he appears as a passenger on the Friendship Express talking to Sweetie Drops and appears in Appleloosa the day after spectating the buckball game between Ponyville and Appleloosa. In The Fault in Our Cutie Marks, he appears during Find the Purpose in Your Life watching gabby play baseball and being cheered up by Gabby on a bridge. He alter attends Gabby's cute-ceñeara. In P.P.O.V. (Pony Point of View), he makes a background appearance talking to Daisy in Ponyville. In To Where and Back Again - Part 1, he and Daisy appear talking to Shoeshine in Ponyville.

In Celestial Advice, Goldengrape appears attending Starlight Glimmer and her friends' Equestrian Pink Hearts of Courage award ceremony and later Starlight Glimmer's graduation, both at the Castle of Friendship. In A Flurry of Emotions, he appears talking to Cherry Fizzy at the Ponyville Café and later attends Spearhead's art gallery inside. In Forever Filly, he makes a background appearance standing in Ponyville with Royal Riff. In Parental Glideance, he attends the Wonderbolts' showcase in Canterlot and covers his ears upon hearing Bow Hothoof and Windy Whistles loud cheering. In The Perfect Pear, Goldengrape appears at Grand Pear's pear jam stand at the Ponyville marketplace and has a brief speaking role telling Apple Bloom about Grand Pear. In Fame and Misfortune, he makes various background appearances in Ponyville talking to an unnamed mare and later Sweetie Drops and subsequently at Sweet Apple Acres another appearance as a Sweet Apple Admirer. In Triple Threat, he makes background appearances in Ponyville as Spike asks around Ponyville looking for Friendship problems, talking to Stormfeather and later Rainbow Stars. In It Isn't the Mane Thing About You, he appears as a background character standing by a fruit stand in Ponyville.

In The Maud Couple, Goldengrape appears with Berryshine at the Ponyville Comedy Club and subsequently appears walking in Ponyville and attending Maud Pie's birthday party. In The Break Up Break Down, he and Crusoe Palm sit together at a table at the Ponyville Café during Hearts and Hooves Day. In Yakity-Sax, he makes a backgound appearance walking by Ponyville Town Hall. In Road to Friendship, he appears in the audience for Starlight and Trixie's magic show. In The Washouts, he appears in the audience for each of the titular group's two Ponyville shows.

In the special My Little Pony Best Gift Ever, Goldengrape makes background appearances exiting the Ponyville Express as it arrives in Ponyville with Twinkleshine, leaving the front desk of the Ponyville Post Office, and standing with Meadow Song outside the Ponyville Day Spa.

In The Beginning of the End - Part 2, Goldengrape appears as part of King Sombra's army of mind-controlled slaves following him to Canterlot and later confronts the Mane Six when they arrive at Canterlot's gates. In Common Ground, he appears with Daisy in the Appleloosa theater watching the newsflash on the growth in popularity of buckball. In 2, 4, 6, Greaaat, he appears in the audience for the buckball game between the School of Friendship and the School of Magic and spectates the halftime cheerleading routine. In A Trivial Pursuit, he and Daisy appear entering the Hay Burger and spectating Trivia Trot. In The Summer Sun Setback, he appears in the audience for the final Summer Sun Celebration in Canterlot. In Daring Doubt, he appears in a bookstore in Manehattan attending to Ahuizotl's public book reading. In Growing Up is Hard to Do, he makes background appearances pushing a baby carriage in Ponyville, as a passenger on the Friendship Express, and attending the Appleloosa County Fair. In The Big Mac Question, he appears in the Ponyville marketplace getting scared by Discord's talking apples and running away.

Goldengrape, with a unicorn horn, makes a brief appearance at the very beginning of My Little Pony Equestria Girls, talking to Amethyst Star at the Crystal Empire train station.

Goldengrape is one of many ponies seen in the establishing shot of Ponyville in My Little Pony Equestria Girls: Rainbow Rocks.

Goldengrape appears in a photograph in Nightmare Night, and in Land of Harmony.

Goldengrape also appears with his name listed with a trademark symbol in Enterplay's collectible card game, which is the first time that he is simultaneously referred to by name and depicted with the same design and hair colors as in the show. His card α #43 R lists the quote "So, a pegasus, an earth pony, and an alicorn walk into a barn...."

"You mean welcome back to Ponyville. Grand Pear was originally from here before he opened his famous pear jam store in Vanhoover."
— To Apple Bloom, The Perfect Pear

"So, a pegasus, an earth pony, and an alicorn walk into a barn...."
— Enterplay collectible card game α #43 R card of Goldengrape 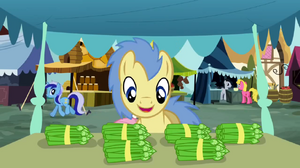