Goldie Delicious is a relative of the Apple family introduced in Pinkie Apple Pie. She keeps a number of cats and she is shown to be a hoarder of items and heirlooms.

Peter New was cast as Goldie Delicious based on his imitation of Tabitha St. Germain's voice as Granny Smith.[3]

When asked on Twitter about Goldie Delicious' status in the future depicted in the series finale The Last Problem, Jim Miller replied, "No one lives forever..."[4]

Goldie Delicious is first mentioned early on in her debut episode. Granny Smith calls her a cousin and describes her cabin as an "Apple family history museum". Applejack, Apple Bloom, Big McIntosh, Granny Smith, and Pinkie Pie travel to her cabin to find out for sure of Pinkie Pie is a relative of the Apple family.

When Goldie Delicious is introduced, she is shown to have a large number of cats as companions, including a full-grown cheetah. She also keeps a multitude of assorted items and Apple family heirlooms, and her cabin appears to be kept in a state of untidiness. Among her belongings is a complete record of the Apple family tree.

Goldie greets Applejack's family and Pinkie Pie amicably when they visit her. She apologizes to them when she fails to give them the answers they seek about Pinkie Pie's genealogy, and she gives them a new wagon to replace the one that collapsed on their way to her cabin.

As Pinkie Pie and the Apples return to Ponyville, Goldie is shown to have on her wall photographs of other Apple family members, including Auntie Applesauce, Half Baked Apple, Apple Split, Florina Tart, Jonagold, and "Apple Mint", as well as a photograph of "Pitch Perfect".

Goldie Delicious makes a brief appearance in Filli Vanilli during the Pony Tones' first performance of Find the Music in You, whilst carrying a saddle bag full of cats.

In Every Little Thing She Does, Goldie Delicious appears in one of Applejack's scrapbook photos with her cats, and Applejack credits her as saying, "If you can't say anythin' nice about anypony, come sit by me!"

In The Perfect Pear, Goldie Delicious tells Applejack, Apple Bloom, and Big McIntosh the first part of their parents' love story and reveals that their mother is a member of the Pear family.

In Grannies Gone Wild, Goldie appears as one of the "Gold Horseshoe Gals" alongside Apple Rose, Auntie Applesauce, and Granny Smith on their trip to Las Pegasus. Rainbow Dash serves as their chaperone, but she gets in the way of their fun out of a desire to ride the Wild Blue Yonder rollercoaster.

In The Big Mac Question, Goldie Delicious appears in attendance of Big McIntosh and Sugar Belle's wedding. In The Last Problem, Goldie Delicious briefly appears in Applejack's group shot during The Magic of Friendship Grows and an older Apple Bloom is seen wearing her shawl in future Equestria.

Goldie's human counterpart appears in the My Little Pony Equestria Girls: Better Together short Road Trippin, where she holds a party where the Rainbooms are the musical entertainment.

Goldie Delicious is a playable character in Gameloft's mobile game. Her in-game description states, "Goldie Delicious loves her cats as much as she loves solving genealogy mysteries! If Apple is your last name, Goldie Delicious will use her in-cider knowledge to cultivate a connection!"

"Now that's how you run an errand."
— Pinkie Apple Pie

"Y'all sure you don't want to take any of these Apple family heirlooms home with you?"
— Pinkie Apple Pie

"Now that's how you make an entrance!"
— The Perfect Pear

"And these here are cat treats from your great grand-uncle Oakey Smoke! Don't you fret, they're s'posed to be that crunchy."
— Enterplay collectible card game Canterlot Nights #90 R card of Goldie Delicious 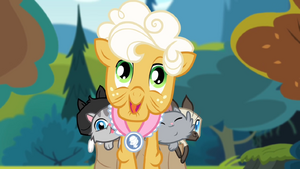