My Little Pony Friendship is Magic Wiki
Register
Don't have an account?
Sign In
Advertisement
in: Male characters, Elders, Griffons,
and 2 more
English

Grampa Gruff, or Grandpa Gruff, is a male griffon and supporting character who first appears in the season five episode The Lost Treasure of Griffonstone. It is stated in The Hearth's Warming Club that he is "Grampa" in name only and does not have any familial grandchildren, contradictory to The Elements of Harmony Vol. II guidebook's identification of Gilda as his granddaughter; Jim Miller has stated that Gilda, Gavin, Gruff, and Gabby are unrelated[2] and that Gruff is Gallus' guardian but not grandfather.[3]

Regarding Grampa Gruff's appearance in My Little Pony: Friends Forever Issue #24, issue writer Georgia Ball stated on Twitter that it was the result of minimal communication between her and issue artist Jay Fosgitt[4] and that she "didn't see [the completed] art until final approved letters".[5] Gruff is one of three Friends Forever Issue 24-redesigned griffons, the other two being Greta and retroactively Gretchen.

Grampa Gruff appears in the season five episode The Lost Treasure of Griffonstone as a resident of Griffonstone. When Rainbow Dash and Pinkie Pie are summoned to the dilapidated town by the Cutie Map, Gruff explains to them—for a few bits—that Griffonstone fell into misery and ruin due to the theft of the Idol of Boreas.

Grampa Gruff harbors more pride for Griffonstone than the average griffon, but he is just as greedy. Gilda makes a living in Griffonstone selling griffon scones using Grampa Gruff's recipe.

Grampa Gruff appears in School Daze - Part 1 and School Daze - Part 2 as Gallus' representative at the School of Friendship. However, after Chancellor Neighsay's insensitive words toward the non-pony races, Gruff pulls Gallus out of the school and believes he is better off at home. At the end of the premiere, with enough pleading from Gallus, Gruff begrudgingly allows him to go back to school.

In Uprooted, Grampa Gruff briefly appears signing a permission slip for Gallus. In Dragon Dropped, he is mentioned by Gabby saying that he constantly wants updates on Gallus.

In A Horse Shoe-In, Grampa Gruff attends a parent-teacher conference as Trixie explains Gallus' accomplishments in her class. Grampa Gruff constantly gives Trixie rude responses, causing an argument between them that results in Trixie banning him from the school.

In The Ending of the End - Part 2, Grampa Gruff takes part in the final battle against Queen Chrysalis, Lord Tirek, and Cozy Glow. He is listed with a speaking role in the credits, but does not have any lines. In The Last Problem, Gruff attends Twilight Sparkle's coronation ceremony.

Grampa Gruff appears, with a different design than in the series, on My Little Pony: Friends Forever Issue #24 page 16. As a spectator of the Boffyball game between Griffonstone and Yakyakistan, he grumbles about the ineptitude of today's players.

Grampa Gruff is a character in Gameloft's mobile game. An image of him, Gilda, Greta, Griffon Shopkeeper, and Li'l Griffon was posted on the My Little Pony Game Facebook page on February 19, 2016.[6] The game's description of him states, "Old Grampa Gruff wants to tell you a story of how Griffonstone fell from its former glory."

GRAMPA GRUFF is an ornery old Griffon who longs for the days of yore! That's before his homeland of Griffonstone was so run-down. Life was tough back in the day, but he liked it! Oh, how he liked it. Nowadays, he just sits around waiting for outsiders to stop by so he can take advantage of them. What a greedy-pants. If only his granddaughter, Gilda, could talk some sense into him.

"You'd better believe in it! [coughs and wheezes]"
— The Lost Treasure of Griffonstone

"It was the best thing to ever happen to us griffons!"
— The Lost Treasure of Griffonstone

"I'll tell you the whole tragic tale... [laughing] ...for a couple of bits."
— The Lost Treasure of Griffonstone

"The first griffon king, King Grover, united our kind like we've never been united before or since! And he did it all with that incredible Idol of Boreas. [...] That idol brought pride to the heart of every griffon that saw it! From one king to the next, Griffonstone had our golden idol. We were the envy of all other species. It held us together – it gave us an identity – right up until the reign of King Guto. [...] That's when Arimaspi came to steal our griffon treasure! King Guto tried to fight him off, but Arimaspi managed to get away with the idol! [...] They say when our treasure fell into the Abysmal Abyss, our pride went with it. King Guto was the last king of Griffonstone, and we all lived miserably ever after. The end!"
— The Lost Treasure of Griffonstone

"Gallus doesn't need to know I'm proud of him! And he certainly doesn't need me trekking all the way to Ponyville!"
— A Horse Shoe-In

"These boffypuff balls are making the players soft! In my day the ball was a needle-nosed scorpion on an all-bean diet. And we liked it!"
— My Little Pony: Friends Forever Issue #24 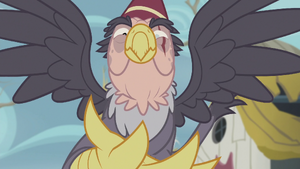