Grand Pear is an elderly Earth pony who first appears as a supporting character in the season seven episode The Perfect Pear. He is a member of the Pear family, Pear Butter's father, Bright Mac's father-in-law, and Applejack, Apple Bloom, and Big McIntosh's maternal grandfather.

In The Perfect Pear, Grand Pear first appears selling pear jam in the Ponyville market. Having previously lived in Vanhoover running a pear jam store, he claims to have moved back to Ponyville for a change of pace. He has a friendly encounter with his granddaughter Apple Bloom—though she is initially unaware of the relationship between them—and gives her a free jar of pear jam. Applejack, Apple Bloom, and Big McIntosh learn that Grand Pear is a member of the Pear family and one of the primary instigators of a long-standing feud between the Pears and the Apple family. Through talks with Goldie Delicious, Burnt Oak, Mrs. Cake, and Mayor Mare, the Apple siblings learn of the feud's origin and the love story between their parents Bright Mac and Pear Butter.

In a flashback, Grand Pear and his family get into constant confrontations and competitions with the neighboring Granny Smith and Apple family. Despite their families' feuding, Grand Pear's daughter Pear Butter and Granny Smith's son Bright Mac become friends and later sweethearts. Some time later, during Grand Pear's middle age, he witnesses the destruction of a Pear family water silo and initially blames Pear Butter before Bright Mac steps in to take responsibility. He angrily chews out the Apple stallion and forbids his daughter from seeing him.

Unaware that his daughter continues to see Bright Mac in secret, Grand Pear eventually announces his plans to move the Pear family out to Vanhoover to expand the family business and get away from the Apples. When he discovers that Pear Butter has secretly gotten married to Bright Mac, Grand Pear pressures his daughter to choose between being an Apple or being a Pear. Pear Butter chooses the former, and Grand Pear angrily leaves for Vanhoover without her.

In present day, when confronted by the Apple siblings, Grand Pear reveals that the real reason he returned to Ponyville was so he could reconnect with the family he abandoned years ago. With his grandchildren's help, Grand Pear makes amends with Granny Smith, ends the feud between their families, and sees the cross-spliced apple/pear tree that his daughter and son-in-law left behind.

Grand Pear also makes a cameo appearance at the beginning of It Isn't the Mane Thing About You, selling pear-based confectionaries alongside Granny Smith.

In The Big Mac Question, Grand Pear appears being terrorized by one of Discord's living apples and later in attendance of Big McIntosh and Sugar Belle's wedding. He is also mentioned as being in Granny Smith's dream.

In The Last Problem, Grand Pear briefly appears in Applejack's group shot during The Magic of Friendship Grows.

In the Best Gift Ever short Triple Pony Dare Ya, Grand Pear makes a background appearance operating a pear stand at the Ponyville marketplace.

In My Little Pony: Friendship is Magic Issue #72, Grand Pear appears in a flashback on page 2, and in the present on page 20, being invited to Sweet Apple Acres by Granny Smith.

In the fifth episode of PonyChat, "GRAN PEAR" is included on "APPLEJACK'S FAMILY TREE" presented by Elle on the Inside.

Grand Pear is a character in Gameloft's mobile game, and serves as an enemy minion during "The Pinkie Parents Problem" event. His in-game description states, "This stubborn old stallion can hold quite the grudge, but his love for his daughter could make his heart budge..." Young Grand Pear was added in update 7.5, and acts as a boss during "The Perfect Pear" event. His bio states "In his younger days, Grand Pear couldn't stop feuding with the Apple Family -- starting a breach that would only be healed years later."

"Pears are nature's candy. Apples are sour. Like the expression on your face right now."
— To Granny Smith, The Perfect Pear

"No daughter of mine is gonna make goo-goo eyes at an Apple!"
— The Perfect Pear

"Are you choosin' to be an Apple over being a Pear?!"
— To Pear Butter, The Perfect Pear

"I can't believe I let a silly feud keep me from my family."
— The Perfect Pear

"Thanks, you old crabapple."
— To Granny Smith, The Perfect Pear 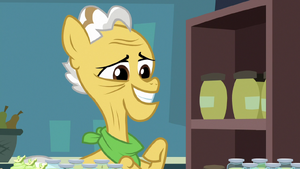