Start a Wiki
watch 01:53
'My Little Pony' Recap: Grannies Gone Wild
Do you like this video?

Grannies Gone Wild is the fifth episode of season eight of My Little Pony Friendship is Magic and the one hundred and seventy-fourth overall. The title is a reference to the since-ended explicit video series Girls Gone Wild.

In this episode, Granny Smith and her friends head to Las Pegasus, and Rainbow Dash tags along as their chaperone so she can ride the best rollercoaster ever before it closes.

According to episode writer, Gillian M. Berrow, the episode's script was mostly written at The Mirage Hotel and Casino in Las Vegas.[1]

According to supervising director Jim Miller, at least the first of the two male Alicorn air traffic director ponies is an animation error.[2][3] When asked if this could be fixed, Miller replied "No. It’s way too expensive to open up an episode, fix something minor like this (minor in Hasbro’s eyes), and re-export, and process the episode. Not just for the English version, but for all the dub and sub versions in other languages, too."[4]

In the Wonderbolts locker room, Rainbow Dash overhears Soarin, Fleetfoot, and Misty Fly talking about a famous rollercoaster at Las Pegasus called the "Wild Blue Yonder", which all of the Wonderbolts have ridden except her. After hearing Soarin describe the ride, Rainbow Dash excitedly tells all of her friends in Ponyville about it. Unfortunately, the rollercoaster is scheduled to permanently close soon, and Rainbow is unable to go and ride it because of her classes at the School of Friendship.

Rainbow asks Applejack to cover her classes for her while she goes to Las Pegasus. Applejack agrees on the condition that Rainbow chaperone the "Gold Horseshoe Gals"—Granny Smith, Auntie Applesauce, Apple Rose, and Goldie Delicious—during their own annual Las Pegasus trip. Rainbow doesn't want to look after a group of slow, elderly ponies, but she agrees for the sake of riding the Wild Blue Yonder before it closes.

As the Gold Horseshoe Gals board the Las Pegasus-bound hot-air balloon, Applejack gives Rainbow a list of rules to follow while chaperoning them, including making sure they don't overexert themselves and not letting them out of her sight. Rainbow wonders how she's going to ride the rollercoaster while following Applejack's rules, and Applejack tells her she'll find time and even learn how to have a good time from the elder mares.

After a slow and boring balloon ride, Rainbow Dash and the Gold Horseshoe Gals arrive at Las Pegasus, where Rainbow is thrilled to discover the Wild Blue Yonder is inside the very hotel where they are staying. As they check into the hotel, the elderly ponies are eager to participate in some exciting hotel games and activities, but Rainbow Dash remembers Applejack's rules. Not wanting anything to jeopardize her chances of riding the rollercoaster, she encourages the others to get some rest in their hotel room.

The Gold Horseshoe Gals pretend to agree and retire to their beds. While the elderly ponies sleep, Rainbow tries to get a ticket to ride the Wild Blue Yonder, but the wait line is very long. With her chaperone responsibilities a priority, she begrudgingly gives her spot in line to someone else. However, when she checks in on the elderly ponies in the hotel room, she discovers they're gone.

Grannies just want to have fun

Rainbow Dash frantically searches the hotel for the missing old ponies, but she's unable to find them. But when she hears a crowd chanting Goldie Delicious' name, she finds them in the arcade playing a horseshoe-tossing game. The other hotel ponies are greatly impressed by their horseshoe skills, and even Rainbow Dash is impressed. However, she remembers Applejack's rule about not letting the old ponies get too excited, and she ends the game prematurely, much to everyone else's disappointment.

Granny Smith suggests going to the hotel's buffet next. But when she picks up a plate of hard, crunchy nachos, Rainbow remembers Applejack's rule about only letting the old ponies eat soft food, and she gives them carrot soup instead, making them even more disappointed. Rainbow hears over the hotel's P.A. system that only one day remains before the Wild Blue Yonder is closed. She once again tries to get the Gold Horseshoe Gals to take it easy during their trip, but the old ponies refuse and want to go dancing instead.

At DJ Pon-3's dance club, the Gold Horseshoe Gals bust a move on the dance floor, but Rainbow remembers Applejack's rule about not letting them overexert themselves. Their dancing draws the attention of two middle-aged stage magicians named Big Bucks and Jack Pot. They invite the gals to their magic show at the Ponet Fantastique theater later that evening and give them complimentary VIP tickets to the event. Realizing their evening will drag on even longer, Rainbow Dash starts to lose hope that she'll ever get a chance to ride the Wild Blue Yonder.

Rainbow ruins all the fun

During Big Bucks and Jack Pot's magic show, they invite the Gold Horseshoe Gals onstage to be assistants in their signature magic trick. The trick involves the gals trying to escape from a tank filled with water. Rainbow Dash, fearing for the gals' safety, interrupts the magic trick and knocks the water tank over. Big Bucks and Jack Pot quickly leave the stage, and the Gold Horseshoe Gals chew Rainbow out for ruining their chance at performing with their favorite magicians.
The gals finally voice their frustration at Rainbow Dash for interrupting or ruining every activity they wanted to do throughout their Las Pegasus trip. Rainbow Dash apologizes to the gals and admits she just wanted to ride the Wild Blue Yonder, but her responsibilities to them as enforced by Applejack got in the way.

The gals are annoyed by Applejack's over-worrying, and Rainbow fears she'll never get to ride the rollercoaster because of the long wait line. Luckily, the Gold Horseshoe Gals use their Las Pegasus VIP connections to skip to the front of the wait line, and Rainbow Dash is finally able to ride the Wild Blue Yonder, much to her delight.

On the hot-air balloon ride back to Ponyville, Rainbow Dash admits that the elderly ponies are actually really cool. The old ponies return the sentiment and invite Rainbow to be an honorary member of the Gold Horseshoe Gals, which she happily accepts.

Auntie Applesauce: Same time next year?
Rainbow Dash: I wouldn't miss it for anything!

Rainbow Dash: It's the coolest ride ever to exist in the history of Equestria!
Applejack: So, when did you ride it?
Rainbow Dash: Oh. [laughs] I haven't.

Rainbow Dash: [reading] "Make sure they get their naps". "Eat only soft foods". "Careful when dancing"? "Don't get too excited"? Seriously?!
Applejack: And don't let 'em out of your sight. Ever.
Rainbow Dash: Wait. Then how am I supposed to go on the rollercoaster?
Applejack: You'll find time. And you might even learn a thing or two about havin' a good time from these old gals.

Apple Rose: You know, this hot air balloon ride reminds me of the time I climbed a tree. Have I ever told you that story?
Auntie Applesauce: Only about a million times.
Apple Rose: Huh? What did you say?
Rainbow Dash: [echoing] They said they've heard the tree story!
Apple Rose: Oh, you wanna hear the tree story? Okay.
Goldie Delicious: Here we go again.

Auntie Applesauce: Oh, my. You are a strong pony. Aren't you, sugarhocks?
"Luggage Cart": [gulps]

Auntie Applesauce: I think he was sweet on me. Maybe I should ask him to accompany me to the magic show tonight.
Granny Smith: Ha-ha! You sure your name's not Applesaucey?

Granny Smith: I love me some nachos. I'mma set my dentures loose on these vittles until the crumbs cry uncle!

Auntie Applesauce: Sugarcube, we never miss your show.
Jack Pot: Fabulous. We'll save a spot for you on stage.
Big Bucks: And in our hearts.
Rainbow Dash: So gross.

Goldie Delicious: You keep ruinin' our fun! I had a hot hoof goin' in that game you decided to lose for us!
Granny Smith: And I wanted to eat those nachos at the buffet!
Apple Rose: And I could have torn up the dance floor if you didn't keep stopping me!
Granny Smith: They're bein' too polite to say it, so I will! Rainbow Dash, we thought you'd be a hoot, but I ain't never met a wetter hen!

Rainbow Dash: I'm sorry I misjudged you for being older ponies. You mares are actually pretty cool.
Granny Smith: Rainbow Dash?
Rainbow Dash: Yeah, Granny?
Granny Smith: The gals and I have been talkin', and, well... We think you're a hoot after all! We'd like to invite you to become a permanent member of the Gold Horseshoe Gals! 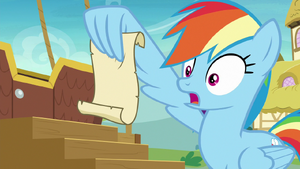 Retrieved from "https://mlp.fandom.com/wiki/Grannies_Gone_Wild?oldid=2047988"
Community content is available under CC-BY-SA unless otherwise noted.