Green Isn't Your Color is the twentieth episode of the first season of My Little Pony Friendship is Magic. Photo Finish, a fashion photographer, hires Fluttershy to be her model. However, Photo Finish ignores Rarity's dress work. Despite her jealousy, Rarity urges Fluttershy to seize the opportunity. Fluttershy dislikes modeling due to her having no confidence in herself but doesn't want to disappoint Rarity after she has encouraged Fluttershy so heavily.

In a gallery of photos of Fluttershy, the farthest photo on the right is a slightly modified version of Lauren Faust's original concept art for Fluttershy/Posey.

The episode was #2 in the We Heart Ponies Fan Favorite Mare-a-thon, in the leadup to Hearts and Hooves Day.

A catwalk shot is visually re-used in the season eight episode Fake It 'Til You Make It.

Rarity and Fluttershy meet at the spa for their weekly get-together. Rarity tells Fluttershy about her upcoming photo shoot with Photo Finish, a famous fashion photographer. Rarity asks Fluttershy to model for the session. Fluttershy is hesitant, but agrees.

In Carousel Boutique, Rarity puts finishing touches on Fluttershy's dress with the help of Pinkie Pie, Twilight Sparkle, and Spike. Spike reveals his crush on Rarity to Pinkie and Twilight. Pinkie is shocked, but Twilight finds the crush obvious. Before Twilight can say this, Pinkie warns her that "losing a friend's trust is the fastest way to lose a friend forever!"

Photo Finish arrives to photograph Fluttershy. Fluttershy does poses that Rarity suggests, but Photo Finish dislikes them. Fluttershy's timid reactions to her outbursts intrigue Photo Finish. The session ends quickly, and Fluttershy and Rarity believe it was not successful. However, Photo Finish informs them that there will be another photo shoot at the park and leaves. Rarity is delighted by this news.

On the day of the shoot, Photo Finish rejects a set of clothes that Rarity picks for Fluttershy. When Rarity offers to find a new dress, Photo Finish refers to Fluttershy as the star she wants to help "shine" over Equestria. Fluttershy tries to back out, but Rarity insists that she take this opportunity for her sake.

Back at the Boutique, Rarity asks her friends to leave her alone. Spike wants to be left alone with her, but Twilight drags him out.

Photo Finish organizes a fashion show, and other ponies there take notice of Fluttershy. Fluttershy slowly becomes famous, getting featured in fashion magazines, advertisements, and endorsement deals. Rarity becomes jealous of the attention that Fluttershy is getting. Meanwhile, Fluttershy experiences the price of stardom. Her fans and paparazzi chase her through the town. She finds refuge in Rarity's shop, where Rarity is making new dresses. Rarity congratulates Fluttershy on her fame. They agree to meet for another spa day, and Photo Finish arrives to bring Fluttershy to another shoot. Sweetie Drops and Berryshine enter the shop hoping to see Fluttershy, and do not care about Rarity's dresses.

In an interview, Photo Finish comments on how happy she is to work with Fluttershy. Fluttershy unsuccessfully attempts to tell Photo Finish about her plans to go to the spa.

At the spa, Rarity realizes that Fluttershy is not coming. She talks to Twilight about her jealousy and hope that Fluttershy's rising star would "burn out." Before she leaves, Rarity makes Twilight promise not to tell Fluttershy about her confession.

"I should be happy for her, but instead I'm just... jealous! Oh, please promise you won't tell her I feel this way. Please, please, pleasepleasePLEASE!"
— Rarity

Fluttershy arrives a minute later and is frustrated about being unable to meet Rarity. She tells Twilight that she dislikes being a model but continues because of Rarity's support. Twilight is about to tell her Rarity's secret when Pinkie appears and reminds Twilight of the price of breaking secrets.

Twilight suggests that Fluttershy act the exact opposite of what Photo Finish wants: clumsy and unattractive. Twilight will use her magic to sabotage the next fashion show and cause Fluttershy to be fired. She discusses her plan with Pinkie and swears her to secrecy.

The next fashion show

During the next fashion show, Twilight uses her magic to manipulate Fluttershy into barking, baying, tripping, falling, and picking her nose. Photo Finish is dismayed with the performance. The audience begins to boo and jeer. However, Rarity arrives and, not knowing Twilight's plan, praises Fluttershy's novel approach to catwalking. Rarity's flashy outfit wins over the audience members, who judge it representative of good fashion. As a result, the audience applauds Fluttershy as well, making her more popular than before.

After the show, Fluttershy, Rarity, and Twilight are backstage. Fluttershy attempts to be cheerful about her rising stardom, while Twilight struggles to keep their secrets. Rarity finally confesses her jealousy and says that she couldn't stand to see Fluttershy fall from stardom. Fluttershy tells her that she only continued modeling to avoid disappointing Rarity.

Photo Finish enters and tells Fluttershy that her performance has created a demand for more photo shoots. However, Fluttershy resigns as Photo Finish's model. She and Rarity promise not to hide their feelings from each other anymore, and they exit the room, leaving Photo Finish confused. In the empty room, Twilight blurts out Spike's crush on Rarity. Pinkie appears inside a mirror and expresses her disappointment at Twilight’s failure.

Rarity, Fluttershy, and Twilight enjoy a stay at the spa. Twilight dictates her friendship report to Spike about keeping secrets and sharing feelings with friends. Spike is still upset that Twilight revealed his secret, but forgives her when she apologizes. When asked to send the report, Spike states that he is "busy at the moment," fanning Rarity, to Twilight's amusement.

Pinkie Pie: Twilight! You promised Spike you wouldn't say anything. He trusts you. And losing a friend's trust is the fastest way to lose a friend forever!
Twilight Sparkle: But...
Pinkie Pie: For-EV-er!

Spike: I'm gonna tell you two a secret. But you have to promise not to tell anyone.
Twilight Sparkle: I promise.
Pinkie Pie: Cross my heart and hope to fly, stick a cupcake in my eye!
Spike: I have a crush on Rarity!

Photo Finish: So how do you feel? Excited? Overjoyed? Thrilled beyond your wildest dreams?
Fluttershy: ...Nervous.
Photo Finish: Nervous? Don't be ridiculous. You're only facing a large crowd of ponies, who will be watching your every move and silently judging you.

Rarity: I'm the one who should be mobbed by strangers wherever I go!

Fluttershy: I can't believe this... I am so frustrated, I could just scream! [inhales, quietly screams]
Twilight Sparkle: Feel better?
Fluttershy: [sighs] ...No.

Twilight Sparkle: Rarity! Fluttershy is your friend.
Rarity: I know, I know. And I should be happy for her, but instead I'm just... jealous! Oh, please promise you won't tell her I feel this way. Please, please, pleasepleasePLEASE!
Twilight Sparkle: You have my word. Losing a friend's trust is the fastest way to lose a friend.
Pinkie Pie: For-EVER!

Twilight Sparkle: Cross my heart and hope to fly, stick a cupcake in my [pokes eye] ARGH!

Twilight Sparkle: Spike has a crush on Rarity!
Pinkie Pie: [sigh] And you were doing so well. 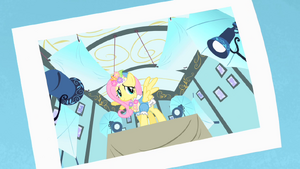