Griffon the Brush Off

Griffon the Brush Off is the fifth episode of the first season of My Little Pony Friendship is Magic. In this episode, Pinkie Pie and Rainbow Dash bond by playing pranks on the other ponies, but when Rainbow Dash's old friend, Gilda the griffon, shows up for a visit, Pinkie gets left out. The title is a play on the phrase "given the brush-off", which is an abrupt and rude dismissal.

In 2012, Lauren Faust stated that Gilda's meanness towards ponies was "an intentional reflection" of how Faust thought many people had "a contempt for little girls' toys".[5]

The episode starts with Pinkie Pie and Twilight Sparkle spending time in a park, with Pinkie enthusiastically relating some story about Rainbow Dash's aerial acrobatics to Twilight, who is reading a book and not paying Pinkie much attention. Pinkie spots Rainbow flying up above and calls to her, but Dash tells her "not now". Pinkie pursues Dash and calls out to her, until Dash slams into a mountainside and slides down next to Pinkie, who tells her she was going to warn her about it.

Pinkie Pie starts asking around Ponyville for the whereabouts of Rainbow Dash. Once she finds her, Dash tries to escape, but Pinkie Pie catches up with her instantly whenever she stops. After several failed hiding spots, Dash gives up and asks what she wants. Pinkie reveals that she was trying to find her so she could help in playing a prank on Spike. Using a nearby thundercloud, they wait for the baby dragon to exit the town square pavilion. Once Spike is out, upon a signal from Pinkie, Dash kicks the cloud to ignite a thunderous boom, scaring him. The scare causes him to hiccup repeatedly, making him breathe his magic fire at a set of scrolls and transporting them to an unsuspecting Princess Celestia.

After making sure he is okay, the two commence a pranking spree on the rest of their friends. They use water colors on the apples in some of Applejack's apple trees, switch Twilight's pen ink with disappearing ink, and use sneezing powder on Rarity. The "victims" are annoyed but still amused by the good-natured practical jokes. At a nearby lake, when Pinkie learns that Dash sees Fluttershy as their target for a fake squirting turtle toy, she immediately stops her. She warns Dash that Fluttershy is too sensitive for even the most harmless of pranks. The two end the day by pranking each other instead.

The next day, Pinkie Pie arrives wearing an arrow head band, a pair of glasses with a red clown nose, a droopy mustache, and a party kazoo near Rainbow Dash's cloud-house in the sky, where she meets Gilda, Dash's old griffon friend from Junior Speedster Flight Camp. Pinkie Pie has prepared another series of pranks for her and Dash to pull. Gilda reminds Dash about a promised flying session, and Dash excuses herself, promising to hang out with Pinkie Pie later. Pinkie accepts this, but as she tries to catch up to the two in the clouds later, Gilda intercepts her and tells her to buzz off now that she is around to keep Dash company.

"Don't you know how to take "get lost" for an answer?! Dash doesn't need to hang with a dweeb like you now that I'm around. You're dorkin' up the skies, "Stinkie Pie". So make like a bee. BUZZ OFF!"
— Gilda

Pinkie Pie goes to Twilight Sparkle at the library for advice about Gilda's mean behavior, but Twilight believes that Pinkie Pie is simply jealous of Gilda. The only advice she can give Pinkie is to try to improve her own attitude. Pinkie is upset at Twilight's refusal to take her side but reflects that maybe Twilight's assessment is true and enjoys a milkshake alone at Sugarcube Corner.

Rainbow Dash and Gilda show up in town and, not noticing Pinkie Pie, part ways briefly so Rainbow Dash can attend to some weather jobs. When Pinkie observes Gilda scaring Granny Smith and stealing an apple from a produce stand, she tries her best to justify the situation. The last straw falls when the griffon roars at and drives to tears a well-meaning Fluttershy, who was guiding a family of ducks. Fluttershy flies away and passes two ponies on the way making strange faces, which an animator on the show described as a "derpy-sorta look".[11] Tired of the bird-lion's mean streak, Pinkie Pie vows to fix the problem "Pinkie Pie-style."

This entails throwing a welcoming party at Sugarcube Corner in Gilda's honor. At the party, the griffon is greeted by Pinkie's joy buzzer handshake. Gilda warns Pinkie that she knows what the pony is up to, but the latter simply brushes it aside and officially starts the party by having everyone in the party welcome Gilda. After the party starts, Gilda falls for most of the pranks set up for the party, to which she hides her growing irritation from the other ponies, including Dash.

The griffon strongly suspects that Pinkie Pie was the mastermind behind the party pranks. The pink pony then preps the griffon for "Pin the Tail on the Pony". As she guides the guest of honor to the picture, Gilda suspects this is yet another prank and goes the other direction, resulting in slipping over a fallen piece of cake and having the 'tail on the other end'.

Gilda finally loses her temper, calling all the attendees at the party "dweebs" and proclaiming Pinkie Pie as "Queen Lame-o" for setting up all the pranks. She then attempts to bail the party with Dash at her side, but Rainbow Dash doesn't move after seeing Gilda's true nature. To everyone's surprise, Rainbow Dash reveals that she is the one who set up all the pranks (not all meant for Gilda). Contrary to the bird's view of the party as a way to get back at her, Pinkie reveals that it was meant to improve the griffon's sour attitude. Disappointed over her old friend's mean behavior towards her new friends, Dash tells Gilda to go find some "new cool friends someplace else" if being cool is all she cares about. Rather than apologize for her behavior and having no proper response to this, Gilda calls Dash a 'flip-flop' and storms out, slamming the door behind her. Rainbow Dash then apologizes to the party attendees for Gilda's behavior, and she and Pinkie Pie make up with a joy buzzer handshake.

Twilight Sparkle apologizes to Pinkie Pie for accusing her of misjudging Gilda, and learns that, rather than try to influence who your friends spend time with, you yourself should try to be a good friend, and trust that the true face of a false friend will eventually be revealed through their behavior. While sending her report at the end of the episode, Twilight plays a prank of her own by tricking Princess Celestia into trying to write with disappearing ink.

Rainbow Dash: Hey, remember the chant?
Gilda: Yeah... They made us recite it every morning. I'll never get that lame thing out of my head.
Rainbow Dash: Soooo...?
Gilda: Only for you, Dash...

Gilda: So, Dash, ya got new moves in your Tricktionary, or are you 100% old school?

Pinkie Pie: Hi! It's later! And I caught up!

Pinkie Pie: Don't you worry your pretty little head about mean old Gilda! Your auntie Pinkie Pie has it all taken care of!
Fluttershy: I'm a year older than you.

Gilda: Hey. I'm watching you... like a hawk.
Pinkie Pie: Why? Can't you watch me like a griffon?

Gilda: This.. is your idea of a good time?! I've never met a lamer bunch of dweebs in all my life! And Pinkie Pie... YOU! You are "Queen Lame-o" with your weak little party pranks! Did you really think you could make me lose my cool? Well, Dash and I have ten times as much cool as the rest of you put together! Come on, Dash. We're bailing on this pathetic scheme... Come on, Rainbow Dash, I said we're leaving!
Rainbow Dash: You know, Gilda? I was the one who set up all those "weak pranks" at this party...
Gilda : ...What?!
Pinkie Pie: Ooh...
Rainbow Dash: So I guess I'm "Queen Lame-o"...

Rainbow Dash: You know, this is not how I thought my old friend would treat my new friends. If "being cool" is all you care about, then maybe you should find some "new cool friends" someplace else.
Gilda: Yeah? Well... You... You... You are such a-a-a "Flip-Flop"! Cool one minute, and lame the next. When you decide not to be lame anymore, give me a call...
Rainbow Dash: Not cool. 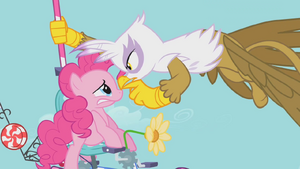 Griffon the Brush Off image gallery