Start a Wiki
Griffons are a race of creatures in Equestria; according to The Bestiary of Equestria page 115, "their front half resembles an eagle with the talons and wings of such, whereas the back half is clearly that of a lion".[1] A griffon named Gilda first appears in Griffon the Brush Off, and various other griffons appear throughout the series and other material. Of the named griffons, around two-thirds have names beginning with the letter G.

While the show, the toys, the chapter book Twilight Sparkle and the Crystal Heart Spell, and other merchandise render the word as "griffon", the more common spellings for the mythological creature are "griffin"—used by a Discovery Family press release[2] and sometimes in Gameloft's mobile game—and "gryphon".

On Twitter in early January 2016, IDW comics writer Georgia Ball said, "I wish I had caught on that ALL griffons have G names, for some reason I thought that was just the girls. All of the girls have G names."[3] "All of their names are of Germanic origin though. Digging through German baby names... I spend a lot of time with baby name sites."[4] However, Ball was further still mistaken, as even before Coach Klaus, Firegem, Elke, Hilda, Franz, and Rinehart, already not all griffons followed the intention of having G names,[5] an example being Vermouth Roux. There has since also been Blackbeak.

In Griffon the Brush Off, Gilda, an old friend of Rainbow Dash's from Junior Speedsters flight camp, appears as an antagonist. Like Pegasi, Gilda can fly and stand on clouds. Pinkie Pie tries to join in on the duo's time together, but Gilda is hostile and insulting toward her. When left alone for a short time, Gilda pranks Granny Smith, steals an apple from a fruit stand, and bullies Fluttershy to tears. Pinkie throws a party in Gilda's honor, hoping to improve her attitude. When Gilda falls for various pranks at the party, she snaps and calls everyone at the party except Rainbow Dash "dweebs". Realizing Gilda's true colors, Rainbow Dash effectively renounces her as a friend.

In Read It and Weep, the second book in the Daring Do book series is titled Daring Do and the Griffon's Goblet. A griffon is depicted on the cover of this book and on another Daring Do book cover in A Friend in Deed.

In MMMystery on the Friendship Express, a griffon named Gustave le Grand appears as an éclair chef and entrant in the National Dessert Competition. During the train ride to Canterlot, he comes under suspicion of eating a portion of Mr. and Mrs. Cake's Marzipan Mascarpone Meringue Madness, with Pinkie imagining him as a stereotypical dastardly villain from black and white silent films. While he's cleared of suspicion of eating the MMMM, he does eat Mulia Mild's Chocolate Mousse Moose after Pinkie Pie makes it sound appetizing.

In Rainbow Falls, Giselle and two other griffons appear as a qualifier team for the Equestria Games' aerial relay event. After the Mane Six are temporarily Breezies via Twilight Sparkle's magic in It Ain't Easy Being Breezies, Rainbow Dash says to Twilight, "I've always kinda wondered what it would be like to be a griffon." Griffons appear in Trade Ya! Giselle and her two teammates, as well as Gilda, Gustave le Grand, and four more griffons, appear in the episode Equestria Games.

The Lost Treasure of Griffonstone introduces the griffons' home kingdom of Griffonstone. The griffons here are depicted as a greedy race whose lust for gold and treasure is stated to rival that of dragons, and they only offer their services in exchange for bits. In ancient times, their ruler King Grover ushered in an era of prosperity for the griffons with the golden Idol of Boreas, which became the city's centerpiece. According to Grampa Gruff, however, the griffons returned to their selfish old ways during the rule of King Guto when the idol was stolen by the monster Arimaspi, both of which plummeted into the Abysmal Abyss nearby, leaving the once glorious city in shambles. When Pinkie Pie and Rainbow Dash come to visit Griffonstone, Rainbow tries to recover the lost idol to restore the kingdom's former glory, but it falls further into the abyss beyond all reach. Pinkie encourages Gilda to spread friendship and goodwill among the griffons so that they may rebuild their home together. In the process, Rainbow Dash and Gilda rekindle their friendship.

Gustave le Grand and one other griffon appear in Princess Spike. A griffon costume is worn for Nightmare Night in Scare Master. Gustave le Grand is mentioned by Svengallop in The Mane Attraction.

Twilight briefly mentions griffons in The Crystalling - Part 1 when she reveals that one of her planned friendship lessons for Starlight Glimmer concerns traveling to Griffonstone and befriending a griffon.

In Stranger Than Fan Fiction, griffons are depicted fighting Pegasi on two of the seven doors in the Temple of Chicomoztoc's treasure chamber. Griffons also appear in The Fault in Our Cutie Marks.

In Secrets and Pies, a griffon statue takes the place of a pony statue in Pinkie Pie's fantasy sequence. Near the end of Uncommon Bond, "Natalya" briefly appears getting off the Friendship Express train.

In School Daze - Part 1, a griffon named Gallus enrolls as a student at the School of Friendship. In The Hearth's Warming Club, Gallus tells of a Griffonstone holiday called the Blue Moon Festival, in which griffons try to be as nice to each other as they possibly can.

In The Ending of the End - Part 2, the griffons are rallied by Gallus to help the ponies in the final battle against Queen Chrysalis, Lord Tirek, and Cozy Glow. In The Last Problem, some griffons appear in future Canterlot and at Twilight's coronation in flashback.

In My Little Pony: The Movie: The Junior Novel, Twilight Sparkle and her friends initially mistake Captain Celaeno and her crew for griffons. In Starlight Glimmer and the Secret Suite, Starlight Glimmer uses the phrase "Great Griffon's beak!" to express amazement.

The Journal of the Two Sisters

In The Journal of the Two Sisters, a young Princess Celestia and Princess Luna meet a colony of griffons and their leader named Gregor.

The right side of official map of Equestria reads "Yonder to Griffons →", indicating griffon lands to the east.

In The Bestiary of Equestria.​[​specify​]​ 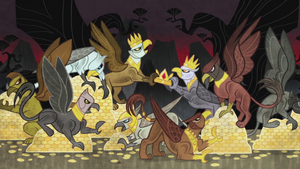 Retrieved from "https://mlp.fandom.com/wiki/Griffons?oldid=2153743"
Community content is available under CC-BY-SA unless otherwise noted.