Start a Wiki
Griffonstone, also called the Griffon Kingdom, is a city east of Equestria that is populated by griffons and first featured in the season five episode The Lost Treasure of Griffonstone. It is the hometown of Gilda, Gabby, and other griffons.

Griffonstone first appears in The Lost Treasure of Griffonstone as a landmark on the Cutie Map, located on one of the peaks of the Hyperborean Mountains. According to the history text "Bygone Griffons of Greatness", the griffons of Griffonstone were once as greedy as dragons, selfishly hoarding their bits and treasures. They were eventually united by King Grover through a treasure called the Idol of Boreas. With the griffons' newfound pride, Griffonstone had grown into a great and majestic kingdom.

In the episode's present day, the Cutie Map sends Pinkie Pie and Rainbow Dash to solve a friendship problem in Griffonstone. When they arrive, they discover the city to a small, shabby-looking town populated by rude griffon citizens. According to Grampa Gruff, Griffonstone used to be a grand city of proud and united griffons thanks to the Idol of Boreas. However, sometime during the reign of the fourteenth king Guto, a monster named Arimaspi attacked and stole the idol. The idol was eventually lost when Arimaspi fell into the Abysmal Abyss, causing Griffonstone to fall into a state of misery.

As a result of Griffonstone's decline, many buildings and areas in the city lie in ruin and disrepair. These include the train station, located at the base of Griffon Gorge; the castle, which has a vacant throne following the disgrace of King Guto; the library, which has books scattered everywhere and a crumbling statue of King Grover; and the Abysmal Abyss, which is subject to constant rushing winds.

Griffonstone is particularly notable in that it lacks most basic businesses and establishments, including a bakery and party store, and singing is apparently outlawed. Most griffons living in Griffonstone are impolite and greedy, shoving their way past others and refusing services without the promise of bits.

In The Fault in Our Cutie Marks, Griffonstone is featured again in Gabby's flashback. Gabby works in the city as a cheerful yet unappreciated mail delivery griffon, and Gilda continues to work selling griffon scones.

In School Daze - Part 1, Grampa Gruff brings Gallus to the School of Friendship to represent Griffonstone until Chancellor Neighsay closes down the school. In part 2, Rainbow Dash travels to Griffonstone in an attempt to bring back Gallus after deciding to reopen the school.

In The Hearth's Warming Club, Gilda, Gabby, and Grampa Gruff appear in Griffonstone celebrating the Blue Moon Festival. In Friendship University, Griffonstone is pictured on a postcard that Star Swirl the Bearded previously sent to Twilight.

In Uprooted, Gallus returns to Griffonstone briefly in order to get permission from Grampa Gruff to return to school early. In The Ending of the End - Part 2, Griffonstone is briefly seen again when Gallus rallies the other griffons to help in the battle against Queen Chrysalis, Lord Tirek, and Cozy Glow.

In My Little Pony Micro-Series Issue #5, Pinkie Pie mentions on page 4 that clown entertainer Ponyacci once "got a standing ovation from the Griffon Kingdom!"

Griffonstone is heavily featured in My Little Pony: Friends Forever Issue #24, in which the griffons have developed a recent passion for the sport of Boffyball. With Rarity's assistance, Gilda leads a team of Griffonstone players against a team of yaks representing Yakyakistan. In the five-part story arc Cosmos, it is the hiding place of one of the six Andalusian Stars.

In My Little Pony: Friends Forever Issue #26, Prince Blueblood offers the yaks of Yakyakistan griffon scones that he had ordered "all the way from the Griffon Kingdom!"

Griffonstone is also featured on its own card, #154 U, in the Equestrian Odysseys expansion set of Enterplay's collectible card game. 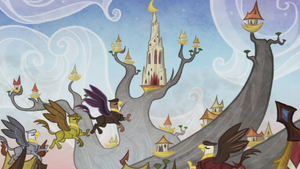 Retrieved from "https://mlp.fandom.com/wiki/Griffonstone?oldid=2136666"
Community content is available under CC-BY-SA unless otherwise noted.