Grogar is a male ram first alluded to in the season seven episode A Flurry of Emotions. He is a magically powerful tyrant who ruled and terrorized Equestria in ancient times. In the ninth and final season, Discord disguises himself as Grogar and forms an alliance of villains in a misguided effort to prepare Twilight Sparkle as Equestria's new ruler.

Grogar shares his name and overall design with the Generation 1 villain from the My Little Pony 'n Friends four-parter "The Return of Tambelon", from which elements of his backstory are also drawn.

According to Jim Miller, Grogar being Discord all along was planned since the beginning of season nine, as they wanted Queen Chrysalis, Lord Tirek, and Cozy Glow to be the main antagonists because they had more connection to the main characters.[1]

Grogar is first mentioned in the season seven episode A Flurry of Emotions as the antagonist of the children's storybook Gusty the Great, which Twilight Sparkle reads to a group of sick foals at Ponyville Hospital. In the story, Grogar battles a group of unicorn warriors led by the titular hero.

In the season nine premiere The Beginning of the End - Part 1, Grogar is revealed to be real when he summons Queen Chrysalis, Lord Tirek, Cozy Glow, and King Sombra to his underground lair. As the villains explain to Cozy Glow, who is unfamiliar with Grogar, he is a legendary tyrant who once declared himself emperor of the lands eventually to be known as Equestria, creating foul monsters to wreak havoc across the land until Gusty the Great took his mystical bell and banished him, leaving him weakened.

Having spent the past millennia recovering his strength and observing his fellow villains' defeats, Grogar proposes that they work together to overcome the Mane Six and conquer Equestria. When Sombra objects to this alliance, Grogar makes a proposition: he can either retake the Crystal Empire on his own, or inevitably fail and suffer the consequences if he still refuses to submit. In Part 2, Grogar witnesses Sombra's demise at the Mane Six's hands from his crystal ball, which he shows to the other villains as a warning to secure their loyalty to him.

In Frenemies, Grogar seeks to recover his stolen Bewitching Bell, and sets out on a mission to locate it while ordering his allies to learn to cooperate. Upon returning, he finds that they have not done so, and decides to send them to recover the bell from Mt. Everhoof, believing that none of them will be able to make the trek alone. Upon their return he is pleased that they have become a team, but frustrated by their apparent failure to retrieve the bell, unaware that they did retrieve it and have concealed it from him.

In The Ending of the End - Part 1, Grogar acquires a new artifact of power to defeat the Mane Six, but Chrysalis, Cozy, and Tirek enact their plan to betray him with the power of the Bewitching Bell. When they use the bell to drain his magic, he is revealed to have been Discord in disguise all along, having pretended to be the real Grogar in a misguided effort to create a final challenge for Twilight and her friends to overcome and boost their confidence. Illustrations of the real Grogar appear in the book from the Canterlot Archives.

When impersonated by Discord, Grogar is presented as a wielder of incredibly powerful magic, capable of transporting creatures to and from seemingly any location, including the depths of Tartarus, and restoring King Sombra's body after it was obliterated by the Crystal Heart. He demonstrates his power by using a small sample of his magic to rejuvenate Tirek into his second form, which he previously only attained after absorbing a great amount of unicorn magic. He also possesses a crystal ball resembling a goat's eye that allows him to observe anything from inside his lair.

The real Grogar is known in legends as the "Father of Monsters", having allegedly created dangerous beasts that plagued ancient Equestria. However, the true source of his power is his Bewitching Bell that was taken by Gusty the Great, which resulted in the loss of all his magic. The bell has the power to drain the magic of others, holding it until it is released at its wielder's behest, and is also indestructible, resisting Gusty the Great's attempts to dispose of it. Absorbing the magic contained within the bell causes Chrysalis, Tirek, and Cozy Glow to transform into more powerful versions of themselves. According to the storybook Gusty the Great, Grogar gained power through the fear of others, which allowed him to free himself from a beam of magic "stronger than a thousand armies".

As impersonated by Discord, Grogar is an opportunistic bully with a desire dating back thousands of years to claim dominion over all that he sees. He summons the members of his legion only once they have sunken to their lowest, and he is cruel inasmuch as he "gave life to the foulest of creatures and allowed them to run wild" in his glory days. He is also an outstandingly patient strategist, preferring to work behind the scenes and seeing the remote loss of his mystical bell as only a temporary setback. Grogar resents being relegated to myth and forgotten, as evidenced by his displeasure when Cozy Glow purports not to recognize his name.

Although he disdains ponies and any villains defeated by them, Grogar acknowledges the power of the Mane Six's teamwork and acknowledges them as a considerable threat to his ambitions. It is the ponies' very strength in unity that inspires Grogar to forge an alliance with other villains, demonstrating a unique insight towards his enemies that most of his fellow villains lack. Nevertheless, he commands his allies with an iron fist, holding their obedience through fear and intimidation rather than trust and loyalty, and showing no sympathy for their failures.

In spite of his own self-image as a tyrant, Grogar has little patience for the arrogance of others. He patronizes King Sombra's claim that he can conquer the Crystal Empire by himself, and the unicorn's boasting irritates him enough that he teleports him away mid-sentence. He displays no tolerance for the self-centered and petulant attitudes of Tirek, Chrysalis, and Cozy, going as far as to punish them with his magic when their constant bickering and complaining becomes too much for him to bear.

Grogar is featured in August 31, 2019 and September 8, 2019 posts on the Discovery Family Instagram as part of "The 'Most Evil' Q&A Ever".[2] In the former post, he declares himself the "greatest, most powerful sorcerer the world has ever seen" but expresses jealousy in Penn and Teller. In the latter, he shares his Instagram selfies taken at various real-world locations.

Grogar is a character in Gameloft's mobile game and serves as both an enemy minion and helper during the "Crowns and Chaos" event. The storyline of the event sees Discord once again assume his form when a countermeasure meant to suppress chaos magic at an event in Ponyville instead causes Discord's magic to spread throughout the event, affecting him and various other attendees. Grogar's bio states "A villainous goatish tyrant from the distant past...or is it just Discord in disguise?"

"I have been away too long if my name no longer strikes fear into the heart of one so tiny."
— To Cozy Glow, The Beginning of the End - Part 1

"My reign was a glorious, fear-soaked epoch of darkness in Equestria."
— The Beginning of the End - Part 1

"Where one is weak, another is strong, and thus unified, they are a formidable force! But we shall use their own strategy to defeat them."
— The Beginning of the End - Part 1

"Such confidence. Go! Try to take back your kingdom. I shall send you there myself. If you prevail, you may keep it. But when you fail, you will submit to me!"
— To King Sombra, The Beginning of the End - Part 1

"I'd say he gambled and lost! But at least he can serve as a warning to those who doubt continuing with my plans."
— Referring to King Sombra, The Beginning of the End - Part 2

"I don't care how, but you must learn to work together! Only then can we accomplish what you so greatly desire – the defeat of Twilight Sparkle and her friends!"
— Frenemies

"Each of you failed to defeat Twilight Sparkle and her friends! My power is greater than all of yours combined; this is but a fraction of it! Understood?!"
— Frenemies 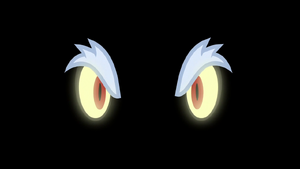