This episode was released on Videoland's on-demand service in the Netherlands on August 25, 2019, thirty-four days ahead of its scheduled premiere on Discovery Family, but was later taken down.

Following an encounter with a deranged ticket-taking pony, the Crusaders decide to try traversing the dense swamp and reaching Appleloosa on foot, believing being grown-ups is all they need to do so. Unfortunately, they soon get become lost—just as Twilight and her friends previously warned. They then run into a pair of young siblings named Biscuit and Spur, who are arguing whether or not to take their pet Bloofy to the Appleloosa County Fair.

Twilight and Fluttershy soon arrive to Appleloosa via train in search of the missing Crusaders, and the fillies-turned-adults appear to inform them of what is going on. At the showcase stadium, Fluttershy identifies the rampaging Bloofy as a rare creature called aWhirling Mungtooth and explains he will only calm down in the presence of its caretaker. Realizing that Spur is Bloofy's true caretaker, the Crusaders go to find her while Twilight and Fluttershy evacuate everyone in the stadium to safety. 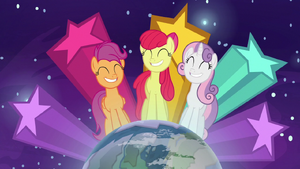 Retrieved from "https://mlp.fandom.com/wiki/Growing_Up_is_Hard_to_Do?oldid=2124510"
Community content is available under CC-BY-SA unless otherwise noted.