Gustave le Grand[note 1] is a male griffon baker who appears in the episodes MMMystery on the Friendship Express, Equestria Games, and Princess Spike. He is the second griffon to appear in the series, after Gilda.

Gustave first appears in the season two episode MMMystery on the Friendship Express boarding the train to Canterlot, gloating about how his éclairs would win first place at the National Dessert Competition instead of the Cakes' cake.

Pinkie Pie theorizes that he is the culprit behind the damaging of the Cakes' cake, until Twilight Sparkle proves that Gustave didn't do it after the other bakers' entries are eaten. When Pinkie Pie accuses him of eating the cake, an imaginary scene occurs in which Gustave ties Pinkie to a train track with a train hurtling towards her and sets the MMMM on a conveyor belt moving towards a saw, portraying him as a classic dastardly villain from black and white silent films.

Pinkie, having learned to get the facts straight and not accuse without proof, reveals that the culprits who ruined the other entries were the bakers themselves. Gustave ate Mulia Mild's Chocolate Mousse Moose, Joe ate Gustave's éclairs, and Mulia ate Joe's Donutopia. At Pinkie's suggestion, the remainder of Gustave's éclairs are combined with the other leftover treats to form a new cake that wins first prize.

In season five, Gustave makes a non-speaking appearance in Princess Spike, serving a tray of gem cupcakes to Spike under false order by Princess Twilight. Svengallop also mentions Gustave in The Mane Attraction.

Gustave is an arrogant baker, believing without a doubt his éclairs will win first prize. When it is discovered that he ate Mulia Mild's Mousse Moose, he admits it was not out of spite but rather because of how Pinkie Pie described it, and he sincerely compliments Mulia. He speaks with a somewhat stereotypical French accent, substituting some "th" sounds with "z" sounds and infrequently using French phrases.

Gustave le Grand appears as one of the contestants in a baking competition in Pinkie Pie: Big Baking Bonanza!

Gustave le Grand is a character in Gameloft's mobile game. The game's description of him states, "When it comes to baking, he's the Griffon you seek. His éclairs, cakes and pies are all 'très magnifique!'"

"Zis is not so, for I, Gustave le Grand, do challenge your crude cake to a duel of delectable delicacies, against my exceptionally exquisite éclairs! They will undoubtedly strike down all the competition, winning first prize and crowning me the champion."
— MMMystery on the Friendship Express

"I am so sorry, Mulia, but Pinkie made your Mousse Moose sound très magnifique."
— MMMystery on the Friendship Express 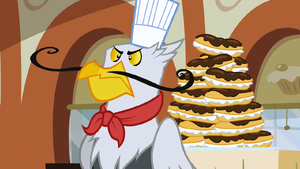 Retrieved from "https://mlp.fandom.com/wiki/Gustave_le_Grand?oldid=2123844"
Community content is available under CC-BY-SA unless otherwise noted.