Half Baked Apple is a background Earth pony and a member of the Apple family. He has a bright orange coat, a two-tone reddish brown mane, green eyes, and a cutie mark of a baked apple. He is referred to by name only in Apple Family Reunion's credits and in other media.

Half Baked Apple shares his design, eye color, and accessories with S04E22 Unnamed Earth Stallion #10, his color scheme with S05E06 Unnamed Earth Mare #3, and his coat and eye colors with "Bushel".

Half Baked Apple first appears in the season three episode Apple Family Reunion. In a flashback to a past family reunion, he burns his tongue on a hot apple fritter. He attends the present day reunion with other Apple family members and takes part in the raising of the new barn at Sweet Apple Acres during Raise This Barn. He also appears in the family photo in front of the reconstructed barn.

In Pinkie Apple Pie, Half Baked Apple appears in a photo on a wall in Goldie Delicious' cabin. In Simple Ways, he is seen getting off the Friendship Express when Rarity and Twilight Sparkle are waiting for Trenderhoof to arrive.

In Filli Vanilli, Half Baked Apple appears as a spectator of the Ponyville turkey call competition. He later appears at the Rainbow Falls Traders Exchange in Trade Ya!

In Appleoosa's Most Wanted, Half Baked Apple briefly appears outside Sheriff Silverstar's office in Appleloosa when the ponies are worried about Trouble Shoes.

On My Little Pony Micro-Series Issue #7 page 18, Half Baked Apple appears at the Ponyville Flea Market. In My Little Pony/Transformers Issue #4, he is summoned to Sweet Apple Acres by Discord to help Applejack drive the Insecticons off the farm.

Half Baked Apple is a character in Gameloft's mobile game, added in the version 1.9 update on June 4, 2014. His in-game description states "With cute freckles and a big smile, Half Baked Apple is a member of the Apple clan who LOVES his sweet treats (half-baked of course!)" 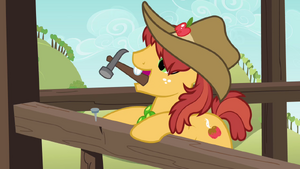