My Little Pony Friendship is Magic Wiki
Register
Don't have an account?
Sign In
Advertisement
in: Pets, Male characters, Pages that need improvement,
and 3 more
English

Harry is a male bear and one of Fluttershy's animal companions. He is first mentioned in Party of One, he makes his first on-screen appearance in Lesson Zero, and he is first addressed by name in Scare Master.

Rebecca Dart stated on Twitter, "Hairy the Bear was the very first design I ever did for MLP."[1] Amy Keating Rogers' Smile Song#Original lyrics include an articulate Hairy.[2]

Harry is first mentioned but unidentified in the season one episode Party of One. When Pinkie Pie asks Rainbow Dash and Fluttershy to attend Gummy's "after-birthday party", they claim that they cannot attend because they have to house-sit for a bear named Harry.

In Lesson Zero, Harry makes his first physical yet unnamed appearance. Fluttershy gives him a painful back massage, which Twilight Sparkle mistakes for angry wrestling.

In Too Many Pinkie Pies, Harry has a picnic with Fluttershy and her other critter friends. In Sleepless in Ponyville, he appears in a forest outside Ponyville about to eat a fish when a sleep-scootering Scootaloo speeds past and accidentally snatches it away.

In Magical Mystery Cure, Harry is among numerous animals in Fluttershy's cottage terrorizing Rainbow Dash. At one point, he uses a table as a back-scratcher. When Fluttershy rediscovers her destiny, he shows Fluttershy affection along with the other animals.

In Princess Twilight Sparkle - Part 1, Harry appears among a multitude of animals hiding in Fluttershy's cottage from the plunderseed vines. In Filli Vanilli, he wakes up to the sound of Fluttershy singing Music in the Treetops. In Maud Pie, he has a card game with other animals in Pinkie Pie's "Pinkie-Rainbow-Rari-Twi-Apple-Flutter-Maud Fun Time" obstacle course.

In Castle Sweet Castle, Twilight brushes Harry's teeth while helping Fluttershy clean up her animal friends. He also appears running wild in the Castle of Friendship throne room when Fluttershy and her friends redecorate.

In Scare Master, Harry is referred to by name for the first time. He helps secure Fluttershy's cottage for Nightmare Night. When Fluttershy decides to join her friends for Nightmare Night, Harry takes part by dressing up as a ferocious monster and chasing the ponies through a cave.

In The Hooffields and McColts, Harry appears in Fluttershy's Furry Friends Book Club. In The Cutie Re-Mark - Part 2, he gives Starlight Glimmer a big bear hug during Friends Are Always There For You.

In No Second Prances, Harry appears at a picnic with Fluttershy and her other animal friends.

In 28 Pranks Later, Harry appears departing a picnic with Fluttershy and her other animal friends at night before being pranked by Rainbow Dash. He later acts as a bodyguard for Fluttershy to protect her from Rainbow's pranks, and he gives her the "I'm watching you" gesture.

In All Bottled Up, Harry appears briefly during Best Friends Until the End of Time. In Fluttershy Leans In, he appears among Fluttershy's animal friends when she shares her dream sanctuary idea with the rest of the Mane Six. In It Isn't the Mane Thing About You, he tries to fix Rarity's ruined mane with leaves and twigs.

In She Talks to Angel, Harry appears during the Predator/Prey Support Group on the predators' side, and during the meeting, Angel pulls on Harry's ear while trying to get Fluttershy's attention, only to make him angry. He also appears later in the sanctuary trying to build a house of cards only for it to be knocked over by Sandra the Wolf, and again eventually agreeing to helping Angel (who is in Fluttershy's body) heal an exhausted Fluttershy (who is in Angel's body).

Harry appears in the Friendship Games blooper reel as one of the many pets Fluttershy smuggles to school. In the Fluttershy ending of Stressed in Show, Harry helps Twilight Sparkle de-stress from her school play duties by allowing her to nap on his back.

In My Little Pony The Movie, Harry gives a bear hug to Fluttershy, Angel, Twilight, and Spike during We Got This Together.

Swamp Monster is a playable character in the game, and serves as final boss of the "Changeling History" event. His description is "Don't be scared: This is actually just a giant bear in a Swamp Monster costume! Unless...wait, that might actually be SCARIER."

In the Hot Topic online promotional video Hot Minute with Fluttershy, one of Fluttershy's questions is "BEST GIFT YOU'VE RECEIVED", to which she answers, "A big hug from Harry the bear".[5]

Harry appears in episode 3 of Baby Flurry Heart's Heartfelt Scrapbook, "All About Alicorns".

HARRY is a hugger. He's bursting with love and affection! As one of Fluttershy's animal pals, this bear is a master of the embrace. Got a cave and some free time? Harry gives snuggle lessons.

Harry appears on the Season 2 poster/DVD set packaging/T-shirt/WeLoveFine.com iPhone case. In the Equestrian Odysseys expansion set of Enterplay's collectible card game, card #84 U is of Harry, which gives him the description "Harry's big brother Fuzzy Wuzzy is jealous of Harry, since Harry is fuzzier than Fuzzy Wuzzy ever was."

Starting with The Maud Couple, Harry appears in the theme song during Fluttershy's line having a tea party with other animals. 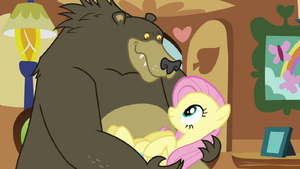