Heading out to the Play

Ponyville covered in a sheet of snow.

Opening view of the train heading to Canterlot.

Train through the snow.

"I am so excited I could just shout!"

And out comes Pinkie Pie!

Looking at how amazing Canterlot looks.

Walking through the snow filled Canterlot, enjoying the scenery.

I spy a snow pony!

Pinkie about take a huge bite.

Twilight Sparkle and her friends laughing.

Can you see the white tree?
Add a photo to this gallery

Putting on a show

I'd pay good money to see a show with Derpy in, wouldn't you?

Twilight getting her make-up done by Equestria's finest make-up artist.

Not so comfortable in the spotlight are you, Fluttershy?

Come on Fluttershy, dear there's nothing to be afraid of.

Fluttershy getting a mascara.

Pulling her eyelashes, doesn't that hurt?

Fluttershy is scared of herself?!

Fluttershy doing a great imitation of an ostrich

Apparently, there are such things as vain tomboys.

It SHOULD be the Rainbow Dash show!

Friendships have their challenges as well.

Due to the open window, the cold freezing weather makes Pinkie let go of Twilight.

"SHUT THE WINDOW!"
Add a photo to this gallery

Alas poor Yorick, I knew he wasn't well at breakfast.

Gasping: Ponies think even the smallest of evils are horrendous!

I know, can you believe it?

The Pegasi tribe (based on ancient Greece and Rome).

The Unicorn tribe (based on medieval Europe).

The Earth pony tribe (based on medieval Europe and Africa).

So that's what Earth Ponies do!

Finally- something to eat!

Earth ponies shivering in the cold.

At the mercy of General Winter.

Nature is stronger than magic. It's a fact.

Food, I want that food!

My wings are bigger than yours.

I have magic, so I deserve the food!

The three tribes going to the summit.

The meeting room of the three tribes.

Princess Platinum of the Unicorns.

Commander Hurricane of the Pegasi.

Chancellor Puddinghead of the Earth ponies.

To solve a solution by...

At first I was serious...

Accusations and hoof-pointing never solve anything... but they sure are fun to do.

I beg your pardon. What did you say?

I said, with your freaky magic!

We're not snobs, but it's hard to be humble when you're magic and everyone else is not.

But I'll be abundantly clear: YOU'RE NO HERO!

Hey! We're not stupid! We just elected a mare-child as our leader.

How dare you speak to a princess that way?

Despite what it looks like, the princess is not in distress.

Me first, I'm the Princess!

They can sense arguments between ponies.

To the front, Private!

We're going to take over because we can!

An entrance of a "Puddinghead."

"...And think inside the chimney!"

That'd be a first.

We must find a new land!

Can you think inside the Chimny? I don't think so.
Add a photo to this gallery

Journey to a new land

Let's get a move on.

A tyrant if there ever was one.

We've been walking so long that my hooves are all rubbery

We've been walking for five minutes

Finding a new land will be so hard!

This just isn't worth it.

Oh Clover. Please do be careful carrying me.

Aren't we going in circles?

Chancellor looking through the map

How was SHE even elected?!

"No such thing as up or down", eh, Chancellor? Theory- disproven.
("Yaaaaaaa-hoo-hoo-hoo-hooey!")

"This is the new land we've been searching for!"

I proclaim this new land to be...Pegasopolis!

In the name of the unicorns, I hereby dub this land... Unicornia!

In the name of the earth ponies, I call this place... Dirtville! I mean... Earth!

I planted my flag first!

Rarity being confronted by Commander Hurricane. 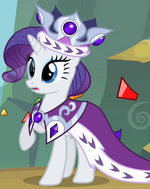 Clover the Clever, I choose you!

Who dares to throw a snowball at me?

We are not amused

Like a biker gang, the Windigos circle ever closer!
Add a photo to this gallery

The Fire of Friendship

Arguing in the cave.

Now that is a line

There could be jewels inside.

Now it's the chancellor's turn to go derp!

It seems there is no way out

But Windigos are always bad news.

What have we done?

The glowing eyes of a windigo.

The three stand together

This is the saddest moment in Season 2.

The power of love and friendship

Windigoes, you are so out of here.

This Fire of Friendship looks familiar?

We are Apple pie!

Princess and the Pauper

And they called it... EQUESTRIA!

And that's how Pinkie Pie got her Cutie Mark! Maybe one day we'll tell you about how Equestria was made! It's a real gem!

And the crowd goes wild!

Thank you all!
Add a photo to this gallery

Singing their hearts out

Both singing their hearts out.

The audience and actors sing the Heart Carol together as the finale.

Arguing about shutting the window

Someone close the window!

Wait, what are we doing!?

Now that is guiding light
Add a photo to this gallery
Retrieved from "https://mlp.fandom.com/wiki/Hearth%27s_Warming_Eve/Gallery?oldid=2162781"
Community content is available under CC-BY-SA unless otherwise noted.