Hearthbreakers is the twentieth episode of the fifth season of My Little Pony Friendship is Magic and the one hundred and eleventh episode overall.

In this episode, the Apple family from Sweet Apple Acres witnesses a different kind of Hearth's Warming Eve with the Pie family.

The episode was first announced at San Diego Comic-Con International on July 25, 2014.[1] It was later revealed at Australia's PonyCon 2015 that the episode would be themed around Hearth's Warming Eve.[2]

Nick Confalone stated on Twitter that his aspiration for this episode was imbuing it with the feeling of the show's first two seasons.[3]

Real candy was originally going to be used during the chocolate animation scene, but proved too difficult and time consuming.[4]

The episode begins in Ponyville, where the houses are all decorated for Hearth's Warming Eve. As Twilight Sparkle and Spike prepare to celebrate at the Castle of Friendship, Pinkie Pie and Applejack enter to extend their holiday wishes before they leave on the train, as the Apple family and Pie family are spending the holidays together.

After a brief conversation about diverse family traditions, Applejack and Pinkie leave to catch their train.

Apples and Pies together

On the train ride to the Pie family's rock farm, Applejack and Pinkie Pie express excitement over their families spending Hearth's Warming Eve together. Applejack is especially excited to share her family's traditions with Pinkie's, including a traditional evening dinner, raising the Equestrian flag, hanging Hearth's Warming dolls over the fireplace, and opening presents the next morning. Pinkie Pie says that her family shares these traditions as well.

At the rock farm train station, Applejack worries that her and Pinkie's families might not get along, but Pinkie assures her that they will because they are such close friends themselves. Pinkie's sister Maud Pie arrives to greet the group and escort them to the rock farm. There they meet the other members of the Pie family: Pinkie's calm-spoken parents Igneous Rock Pie and Cloudy Quartz, her abrasive older sister Limestone Pie, and her shy younger sister Marble Pie.

Pinkie Pie tells her "cousin" family to get settled in before dinner, and Applejack looks forward to the rest of the evening.

Contrary to the Apples' expectations of warm sweet rolls and potpies, the Pies serve unappetizing rock soup at the dinner table. Nonetheless, Applejack remains optimistic and encourages her family to muscle through it.

The Apples are disappointed further to learn that the Pies fashion Hearth's Warming dolls out of rocks instead of crocheted yarn. In addition, they make a bizarre hide-and-seek game out of the Equestrian flag raising: Applejack is teamed up with Pinkie, Big McIntosh with Marble, Apple Bloom with Maud, and Granny Smith with Igneous Rock and Cloudy Quartz.

The next morning, the Pies wake up to find the rock farm decorated more festively, courtesy of Applejack. Despite Applejack's cheerfulness, her efforts are met with a cold reception from the Pies, who feel that the Apples are forcing their traditions onto them. Pinkie Pie, wanting only for the two families to be together, gets caught in the middle. To make matters worse, Applejack had planted her flagpole on a fault line, causing an earthquake that sends a large sacred boulder tumbling into a nearby quarry.

As the disgruntled Pies take down Applejack's decorations, the Apple family decides to return to Ponyville, having overextended their welcome. In a crystal mine, Applejack despairs over her failed attempt to bring the Apples and Pies together. She finds Pinkie Pie in a similar gloom and apologizes for the mess she made. The two sorrowfully wish each other a happy Hearth's Warming and part ways.

On the train ride back to Ponyville, Granny Smith explains to Applejack why the Pie family's sacred boulder is so important. Applejack admits that she got so caught up in the Pies' traditions that she disregarded why their traditions are important to them. After discovering Pinkie's Hearth's Warming present to her, Applejack finally understands.

Back at the rock farm, the Pies struggle to move their sacred boulder to the top of the quarry. Just then, the Apples arrive, and Applejack apologizes for trying to force her family's traditions onto the Pies.

"I was so focused on us bein' one big happy family, I thought we needed the same traditions right away. What I should've done was learn about yours and teach you about ours. And over time, we'd make new traditions together."
— Applejack

The Pies accept Applejack's apology, and the two families work together to push the boulder to the top of the quarry. Some time later, the Apples and Pies celebrate the holidays by combining their various traditions. Applejack unwraps Pinkie Pie's present to her, and the episode ends with Maud entertaining the two families with her rock-themed poetry.

Spike: Just what I always wanted! A book.

Apple Bloom: Sounds like the Apples and the Pies do everything the same way.
Applejack and Pinkie Pie: Of course! We might be related! Hey! I was gonna say that! Stop saying what I'm saying! You stop it first! [both laugh]

Pinkie Pie: I'm so happy I need to make up a new word for how happy I am. What about "rooftastic"? [squee]
Applejack: "Rooftastic"?
Pinkie Pie: As in "I gotta get on the roof and yell to everypony how rooftastic this is"!

Maud Pie: [deadpan] I'm so excited to see you, Pinkie Pie. You too, Applejack. I hope you had fun sledding yesterday.
Applejack: How'd you know that?
Maud Pie: [deadpan] Isn't it obvious? There are specks of extrusive andesite on your hoof. It's a mountain rock.

Igneous Rock Pie: Surely, thy name is naught but Granny Smith. I am called Igneous Rock Pie, son of Feldspar Granite Pie.
Cloudy Quartz: Thou shalt know me as Cloudy Quartz.
Igneous Rock Pie: May providence favor thee well, and to thou comfort our humble homestead bring.
Granny Smith: Y'all gabbin' with words real funny-like. [stammering] What you say them names were? Iggy? And I'm-I'm just gonna call you Big Mama Q.

Maud Pie: Have you ever wished you could turn into a rock?
Apple Bloom: I had a dream once I was an apple.
Maud Pie: We have a lot in common when it comes to thinking about turning into things.

Maud Pie: Excuse me. You planted your pole on a fault line.

Apple Bloom: Attention, everypony! Maud wants to sing some Hearth's Warmin' carols that she wrote!
Apple family and Pie family: [various cheers]
Maud Pie: [deadpan] The first one is about rocks. They're all about rocks. 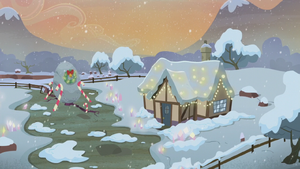