Hearts and Hooves Day is the seventeenth episode of the second season of My Little Pony Friendship is Magic and the forty-third episode overall. The Cutie Mark Crusaders create a love potion in hopes of making Miss Cheerilee and Big McIntosh each other's "special somepony," but when they discover the serious side effects of the concoction, they quickly regret their actions.

The episode was released on iTunes two days prior to its scheduled television debut with the erroneous air-date of "Feb 11, 2011" and was removed within a few hours.[3]

A Flash game called "Hearts and Hooves Day Puzzles" was made available on Hasbro.com ten days before the episode's scheduled airing. The puzzles include several images of Big McIntosh, Cheerilee, and the Cutie Mark Crusaders, set at a picnic, at the treehouse, and at other locations. A few of the images feature two small glasses filled with a hot-pink drink, and one of the images features Cheerilee in a nuptial veil.

The episode opens with the Cutie Mark Crusaders creating an enormous Hearts and Hooves Day card for Cheerilee. When they show it to Cheerilee, she thanks them but mentions that she doesn't have a special somepony. Therefore, the Crusaders take action to find her one. In The Perfect Stallion, the Crusaders look for the ideal stallion for their teacher, but their initial candidates are either unsuitable or already have special someponies. When they spot Big McIntosh piling haystacks, they eagerly ask if he has plans for Hearts and Hooves Day, and when he answers no, they decide he and Cheerilee are right for each other. Sweetie Belle suggests that since Big Mac is so shy, it will be up to Cheerilee to ask him. The Crusaders set up a romantic picnic, and lure Cheerilee there by asking her to identify a tree near the gazebo. Big McIntosh arrives with a toolbox to fix the gazebo, but the three fillies have already fixed it. The fillies quickly hide in a bush to spy on the couple as they awkwardly chat. They are excited when Cheerilee appears to be leaning in for a kiss, but she matter-of-factly points out that Big Mac has something stuck in his teeth.

Dejected that they were unable to help Cheerilee and McIntosh get together, the Crusaders bump into Twilight Sparkle, who is reading a book about Hearts and Hooves Day. According to the book, the tradition started because of a love potion. The interested Cutie Mark Crusaders ask to borrow the book, and Twilight lends it to them. She tries to bestow another book, but the excited fillies have already left. The Cutie Mark Crusaders immediately rush to their clubhouse to create the love potion using "a tuft of cloud" and "a bright rainbow's glow." The book then instructs to stir the mixture with a Pegasus feather. The potions turns bright pink and emits heart-shaped bubbles.

Later that day, they bring Cheerilee and Big Mac together once more to test the potion, telling them it is punch they made. While they hide in the bushes, Cheerilee finally realizes the fillies' plan to bring them together and tells Big Mac to play along and try the "punch." They drink it and the potion quickly takes effect. Cheerilee asks the stallion to be her "very special somepony," and he accepts. The girls are thrilled until they hear the couple calling each other pet names, such as "shmoopy-doopy sweetie-weetie pony pie" and "cutie-patootie lovie-dovie honey-bunny." Disgusted by this strange level of love, the Crusaders wonder what's gone wrong.

Back in their clubhouse, Sweetie Belle consults the book again and finds out that the love potion is actually a love poison. The book states that a long time ago, an Earth pony prince had given an Alicorn princess the drink, intending to make her fall in love with him. However, they were so lost in each other's eyes, they were unable to perform their duties, and their kingdom fell into ruin. Apple Bloom panics, believing she and her friends may have inadvertently doomed Ponyville. Fortunately, the book also provides a way to break the love poison spell: the lovestruck ponies must be kept from looking into each other's eyes for an hour. The Crusaders go to Sugarcube Corner, where Cheerilee and Big Mac are lovingly sharing a milkshake. Mrs. Cake mentions that two ponies so clearly in love will probably want to plan a wedding soon. Sweetie Belle decides that if they can keep the two love-struck ponies away long enough to "get ready" for a wedding, the spell will wear off. The Crusaders suggest a wedding to Cheerilee and Big Mac, who are excited by the prospect and rush off to prepare for one.

Sweetie Belle helps Cheerilee select a wedding dress at Carousel Boutique while barricading the dressing room to keep her inside. At the jewelry shop, Apple Bloom helps Big Mac select a diamond ring, as Scootaloo keeps track of how much time remains until the spell is broken. When Apple Bloom is talking to Scootaloo, Big Mac quickly purchases a diamond for Cheerilee and hurries to Carousel Boutique. Apple Bloom asks Scootaloo to hurry and warn Sweetie Belle, while she attempts to slow down Big Mac. However, the determined stallion is too strong to be stopped. Being weighed down by oxen and a cart full of anvils fails to stop him, and even being tethered to a house only slows him down. As Big Mac approaches the boutique, he falls into a large pit in the ground dug by Sweetie Belle and Scootaloo and lands on a mattress at the bottom. At the same time, Cheerilee bursts out of the barricaded boutique and runs towards her love. The town clock rings the hour mark just as Cheerilee jumps in, and the spell is broken. Cheerilee has no idea why she looks like she is about to get married at the bottom of a pit, and Big Mac returns to his normal, taciturn self. The Crusaders explain that it was all because of their selfish motives to make them fall in love with each other, and they apologize for the ordeal.

Cheerilee and Big Mac decide that a fair punishment would be for the fillies to do all of Big Mac's chores. With the free time that Big Mac now has, he and Cheerilee decide to have lunch together at the gazebo, calling each other "sugar bear" and "pumpkin pie" and teasingly winking at each other behind the fillies' backs. The Crusaders are comically horrified by the thought that they're still under the effects of the love potion.

Ponies featured in The Perfect Stallion

The musical sequence led by Sweetie Belle features some more common ponies and some unusual ponies, which are all listed in the table below.

Cheerilee: Would you three like to tell us why it was so very important that we meet you her-
Sweetie Belle: -Punch!
Cheerilee: Excuse me?
Sweetie Belle: Punch! We made punch. We were gonna set up a stand and try to sell it but, heh, we needed some pony to taste-test it first.
Apple Bloom: Yup.
Sweetie Belle: We thought you two would be perfect together... to test it... together. So, ah, we'll just leave you two alone... together, to test it.

Cheerilee: Girls! Can you explain why I look like I'm getting married at the bottom of a pit?
Sweetie Belle: We may have given you the teeny-tiniest bit of love potion... that may have turned out to actually be a love poison, and you may have gone just a teeny-tiniest bit nutty.

Cheerilee: Since you three are doing all of his chores, Big Mac and I thought we'd have a picnic at the gazebo. Ready, sugar bear?
Big McIntosh: Eeyup, pumpkin pie.
Apple Bloom, Scootaloo and Sweetie Belle: [gasp] NOOOOO!!! 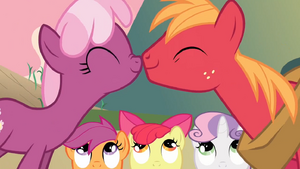