Helia is a female Pegasus pony with a light blue coat, a golden mane and tail with bright yellow highlights, blue eyes, and a cutie mark of a sunflower. She is not named in the show, but she is named in merchandise. In The Crystal Empire - Part 2, she appears as an Earth pony.

Helia first appears in the season two episode Hurricane Fluttershy. She is first seen when Rainbow Dash distributes flyers to the Pegasi of Ponyville and says "no offense" to a mule. Afterward, she appears at numerous points throughout the episode: listening to Twilight Sparkle's explanation on what an "anemometer" is, commending Thunderlane on his impressive wingpower, watching Fluttershy test her wingpower, and—once with different design and cutie mark—joining the other Pegasi in creating the tornado at the Ponyville reservoir.

In The Crystal Empire - Part 2, Helia appears at the Crystal Faire in the Crystal Empire and watches Rainbow Dash and Fluttershy's jousting match. Here, she has no wings. She also watches the second duel between Twilight and Trixie in Magic Duel and appears with the Apple family and other ponies at the beginning of Raise This Barn in Apple Family Reunion.

In Rainbow Falls, Helia appears—with a voiced role and, again, a different cutie mark—on the train to the titular location. She states to Rainbow Dash that she is on the air sprinters team with Thunderlane.

Helia appears once again in Equestria Games, training with other Pegasi on the train ride to the Crystal Empire. She is also seen among the Pegasi attempting to stop the frozen cloud from falling onto the Games stadium.

In Twilight's Kingdom - Part 2, Helia is among the Pegasi whose magic was drained by Lord Tirek, before the rainbowfied Rainbow Dash and Fluttershy fly over to return it to them.

Helia appears at the Cloudsdale weather factory in Tanks for the Memories and at Cranky Doodle Donkey and Matilda's wedding in Slice of Life.

She appears in a musical number in A Hearth's Warming Tail.

In the establishing shot of Ponyville in My Little Pony Equestria Girls: Rainbow Rocks, Helia is one of the Pegasi flying over the town square.

In the Signature My Little Pony magazine issue 69 comic Daring friends and the missing story!, either Helia with Meadow Flower's coat color or Meadow Flower with Helia's design appears at the Canterlot Magic Fair.[2]

Helia is a character in Gameloft's mobile game.

In the Crystal Games expansion set of Enterplay's collectible card game, card #65 U of Helia attributes to Thunderlane the quote "I once saw Helia fly five hours straight without taking a break or breaking a sweat. I knew she'd get gold at the Equestria Games!"

"Good luck, Rainbow Dash! Sorry we couldn't fly with you on the Aerial Relay, but the air sprinters needed us too."
— Rainbow Falls 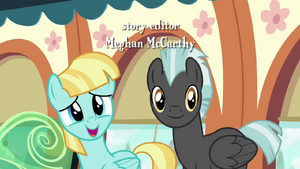