Hitch Trailblazer is a male Earth pony and one of the main characters of My Little Pony: A New Generation and My Little Pony Generation 5. He is the law-keeping sheriff of Maretime Bay and a childhood friend of Sunny Starscout.

Hitch Trailblazer was designed by character artist Celia Kaspar.[1] During the film's concept phase, Hitch was known as simply "The Protector".[2]

Hasbro filed a trademark for the name "Hitch Trailblazer" with the United States Patent and Trademark Office on February 25, 2021.[3]

In the film My Little Pony: A New Generation, Hitch first appears as a young colt and friend to Sunny Starscout and Sprout. Like most other Earth ponies, Hitch has been taught to view unicorns and Pegasi as dangerous enemies, though he is willing to play along with Sunny's games where all the pony races are friends, and attempts to mediate Sunny and Sprout's wildly differing views on the subject.

Years later, Hitch is the peacekeeping sheriff of his hometown of Maretime Bay, with Sprout as his deputy. He frequently bails Sunny out whenever she gets into trouble while spreading her message of friendship and unity with other pony races, such as when she sneaks into the Canterlogic factory and interrupts their annual presentation. When the unicorn Izzy Moonbow comes to Maretime Bay and causes a panic, Sunny foils Hitch's attempts to apprehend her and runs away with her. Hitch decides to go after Sunny so he can place her under arrest.

Hitch follows Sunny and Izzy to the Pegasus city of Zephyr Heights, where he infiltrates a royal celebration while disguised as a Pegasus in order to capture Sunny, almost preventing them from claiming the Pegasus Crystal along the way. In the process, however, he becomes an unwitting participant in Sunny's quest to bring magic back to Equestria. Though he initially helps out just to make sure Sunny faces the consequences of her actions, he later comes to view Izzy as well as the royal Pegasus sisters Zipp Storm and Pipp Petals as friends.

Hitch and his friends acquire the Unicorn Crystal in Bridlewood, but nothing happens when the two crystals are joined together. With their quest seemingly ended in failure, Sunny and Hitch return to Maretime Bay and soon get swept up in Sprout's destructive plot to wage war against unicorns and Pegasi. After Sunny succeeds in bringing the three pony races together, Hitch and his new friends happily welcome a new age of friendship and magic.

Depiction in Make Your Mark

In the hour-long special My Little Pony: Make Your Mark, Hitch struggles to keep the peace when Earth pony resentment toward Pegasi and unicorns starts to build. He also finds an egg on the beach and elects to take care of it, and he helps his friends with preparations for the Maretime Bay Day festival in hopes of reuniting the tribes.

When the tensions start to boil over and make magic go haywire, Hitch finds his hooves magically stuck to the ground. After the crisis is revolved and magic is stabilized, Hitch is now able to communicate with his animal friends. The egg he was caring for also hatches, revealing a baby dragon, whom Hitch adopts as his own.

Hitch is featured in the 2022 My Little Pony comic book series by IDW Publishing. In Issue #1, he leads a group of ponies on a nature walk, which Izzy accidentally ruins by talking too loudly and scaring off the animals. He and his friends later discover that one of the Unity Crystals has been stolen, and they set out to track down the thief. In Issue #2, they discover the ruins of Canterlot, and learn that Discord stole the crystal, and plans to destroy it in hopes of ensuring peace in Equestria.

Hitch is portrayed as responsible, dutiful, and law-abiding in his role as sheriff. As a result, he is very popular and respected among the Earth ponies of Maretime Bay. He takes his responsibilities seriously, sometimes to the point of arrogance and overconfidence. He is shown to care deeply about Sunny Starscout and does not want to lose her as a friend, but his dedication to his sheriff duties can get in the way of their relationship, and he has no qualms about arresting her if she causes trouble.

Hitch has an unexplained magnetism that draws animals and critters to follow him everywhere, and he is shown to like music, sometimes bobbing his head or shaking his flank to whatever music is playing around him. He is also a highly skilled tracker, managing to pursue Sunny and Izzy all the way to Zephyr Heights.

In the Tell Your Tale episode Nightmare Roommate, Hitch is shown to believe in treating others kindly, even giving an offender in his office's holding cell a drink. In Foal Me Once, Hitch is shown to like high-citrus smoothies, sunglasses, and art. In Sunny-Day Dinners, he goes into a wild panic when he learns Sunny and Izzy have gone missing. In The Game is a Hoof, he is shown to be scared by a horror movie he and his friends are watching.

"Hitch is an Earth Pony. He is dedicated to helping Everypony in Maretime Bay as their beloved sheriff and always remembers to follow all the rules! Hitch is also very caring and nurturing, especially towards the cute animals and critters of Equestria who often follow him around!"[4]

"What is it with me and critters? I'm like a magnet to them."
— My Little Pony: A New Generation

"The law is the law, Sunny, and I'm here to uphold it and keep everypony safe."
— My Little Pony: A New Generation

"Man the Splat-a-pult! Activate the unicorn trap! Pick up that litter!"
— My Little Pony: A New Generation

"You may now cheer."
— My Little Pony: A New Generation

"This one's a job for Hitch and Hitch only."
— My Little Pony: A New Generation

"Sunny, Sunny, Sunny, Sunny. You think you've escaped? Well, think again. I will not eat! I will not sleep! Well, maybe a quick nap and snack if I can't find you in the next few hours, BUT! After that, nothing will stop me!"
— My Little Pony: A New Generation

"Did I just agree with a Pegasus?"
— My Little Pony: A New Generation

"I'm right here if you need to talk, Sunny."
— My Little Pony: A New Generation 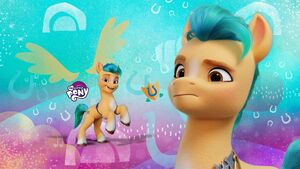