Hoity Toity is a fancy Earth pony and a major representative of the fashion world from Canterlot. The term "hoity toity" means "self-important, haughty, or pompous". Hoity Toity's character design is strongly reminiscent of the late German fashion designer Karl Lagerfeld, the same basis as "Stärke Kragen", in the style of his mane and clothing. His accent is a stereotypical upper class American one.

Hoity Toity first appears in the episode Suited For Success, having arrived in Ponyville to see Rarity's fashion show. Having seen her "perfect" dresses, which are much-revised versions of the original designs, he gives a scathing review, calling the dresses "a piled-on mish-mash of everything but the kitchen sink." This almost ends Rarity's career, until her friends convince Hoity Toity to come back and give her another chance. In contrast to the first fashion show, when he sees Rarity's original ensembles, he is very impressed and recommends featuring her clothes in his fashion boutique in Canterlot, requesting a dozen more of each dress to be created "by next Tuesday."

In Green Isn't Your Color, his distinctive voice can be heard during Fluttershy's fashion show; The Elements of Harmony guidebook lists this episode as one of his appearances.

Hoity Toity also makes a cameo during the song Becoming Popular (The Pony Everypony Should Know), next to Sapphire Shores, in the episode Sweet and Elite. He is also seen in the audience with Photo Finish and Sapphire Shores in Rarity Takes Manehattan and in the stadium crowd with Sapphire in Equestria Games.

In Honest Apple, Hoity Toity serves as one of the judges in Rarity's fashion contest at Carousel Boutique.

In She's All Yak, Hoity Toity appears during Fit Right In. In The Last Problem, he appears in Rarity's group shot during The Magic of Friendship Grows.

Hoity Toity appears in a flashback of Honest Apple with Applejack apologizing to the fashion contestants in Harvesting Memories.

Hoity Toity appears in the audience for opening night of The Singing Stallion in Discord and the Ponyville Players Dramarama.

In the Signature My Little Pony magazine issue 69 comic Daring friends and the missing story!, Hoity Toity appears at the Canterlot Magic Fair.[2]

Hoity Toity is THE style authority in Canterlot. This fancy earth pony can make or break a designer's career -- as Rarity finds out when he stops panning and starts praising her collection. With his dark sunglasses and ponytail, Hoity Toity looks the part of the fashionista. After all, he's all about looking fabulous.

This fashionable pony knows a good dress when he sees one, especially the ones made by Rarity!

As Canterlot's resident fashion guru, HOITY TOITY's been known to harshly critique the works of others, especially Rarity, who longs for his approval.

A Hoity Toity miniature collectible is included in the Famous Friends Set with Photo Finish and Rarity.[3]

"Hello... Oh, this can't be the same designer."
— Suited For Success

"So perfect for my new advertisement."
— Green Isn't Your Color

"Powerful yet at the same time fragile and delicate."
— Honest Apple

Hoity Toity: Flax Seed! You really must come meet my entourage. You're the next pony every pony should know after all!
Flax Seed: Like, popularity is a system of ranking set up by the establishment...
Hoity Toity: *chuckle* Isn't he a pip? Didn't I tell you he was a pip? 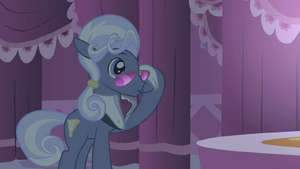