Hondo Flanks, also known as Magnum, and Cookie Crumbles, also known as Betty Bouffant, are the married unicorn parents of Rarity and Sweetie Belle. They appear together in Sisterhooves Social, Inspiration Manifestation, and one issue of the IDW comics, and Hondo Flanks appears alone in One Bad Apple. The two are not named in the show, but they are named in other depictions.

According to Jim Miller, Rarity and Sweetie Belle's parents are "on vacation and out of town" when Sweetie Belle gets her cutie mark.[2]

Hondo Flanks' and Cookie Crumbles' first, and as-of-yet most prominent, appearance is at the beginning of Sisterhooves Social. They surprise Rarity at breakfast and enjoy a meal that Sweetie Belle (poorly) made, Cookie Crumbles mentioning that she'd been giving Sweetie Belle cooking lessons. They entrust Rarity with looking after and spending time with Sweetie Belle while they go on a week-long vacation.

Hondo Flanks later appears briefly in One Bad Apple fishing at a pier near his house.

In season nine's The Ending of the End - Part 2, Hondo Flanks and Cookie Crumbles appear taking shelter with Sweetie Belle and other unicorns in the School for Gifted Unicorns as Canterlot closes itself off from the other pony races.

In Zen and the Art of Gazebo Repair, Hondo Flanks and Cookie Crumbles appear with Rarity and Issue 01 Unnamed Stallion - Magnum, P.I. on My Little Pony: Friendship is Magic Issue #9 page 16, listening to a story told by Rarity.

In Reins, Trains and Carts with Wheels, an awakening Rarity mumbles "No, mommy... Not the one with the shoulder pads..." on My Little Pony: Friends Forever Issue #8 page 10.

In Friends Forever Issue 13, Sapphire Shores says to Rarity "You told me once that your parents don't understand what you do. You told me they never 'got' fashion."

In My Little Pony: Friendship is Magic Issue #37, Hondo Flanks and Cookie Crumbles take part in the Crystal Empire battle against the umbrum. They also appear on page 24 of the My Little Pony Holiday Special 2017 comic.

In My Little Pony: Equestria Girls: Twilight's Sparkly Sleepover Surprise, Rarity tells Twilight "I once called my mother in the middle of the night to come get me."

Hondo Flanks is available as a playable character in Gameloft's mobile game.[3] In the game, he is named "Magnum", and his in-game description states "Rarity and Sweetie Belle's father has a dashing mustache and three footballs as his cutie mark." A texture matching Cookie Crumbles has been included in the game's type01_master_05.pvr file.[4] Cookie Crumbles eventually appears in the game as a secret Ponyville resident as of version 2.0.0, under the name "Betty Bouffant". Unlike her husband, she cannot be acquired either by normal purchase or the Balloon Pop mini-game. Her in-game description states "Betty Bouffant always dreamed of being a bride-to-be. With her white pants and cute frilly collar, she surely is one darling showstopper!"

On page 145 of Little, Brown's My Little Pony Friendship is Magic official guidebook My Little Pony: The Elements of Harmony, Hondo Flanks is shown wearing clothing different than that he wears in the series, and Cookie Crumbles is shown dressed the same as in Inspiration Manifestation.[5] The book revealed Hondo Flanks' horn and Cookie Crumbles' cutie mark earlier than the show did.

In the Canterlot Nights expansion set of Enterplay's collectible card game, Hondo Flanks is named with a trademark symbol on card #45 C, which gives him the description "Not even the slightest hint of Hondo's sports enthusiasm rubbed off on Rarity, and she wouldn't have it any other way." Enterplay's May 13, 2014 Canterlot Nights card list lists card #45 C as "Magnum, Big Daddy" instead of "Hondo Flanks, Big Daddy". Cookie Crumbles is named with a trademark symbol on card #68 C, which gives her the description "Cookie's wish to pass down her secret Rose Velvet Cake recipe to her fillies has produced mixed results. Rarity nailed it, but Sweetie Belle's just tastes like nails." In the Marks in Time expansion set, card #96 U, Bedazzling Costume, attributes to Cookie Crumbles the quote "It's just like I told my little Rarity, there's no such thing as too many sequins or gems!"

Hondo Flanks: I'll have you know that Sweetie Belle here cooked this yummy lookin' breakfast all on her own.

Cookie Crumbles: I've been giving her lessons. I wouldn't be surprised if she's got a cutie mark in fancy cooking by the time we get back from our vacation.

Cookie Crumbles: And six nights, I know! Such a short time to spend with your little sis.

Hondo Flanks: You gonna eat that?

Cookie Crumbles: It's just like I told my little Rarity, there's no such thing as too many sequins or gems! 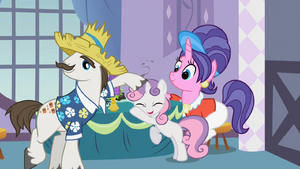 Retrieved from "https://mlp.fandom.com/wiki/Hondo_Flanks_and_Cookie_Crumbles?oldid=2129739"
Community content is available under CC-BY-SA unless otherwise noted.