Honey Rays is a background Pegasus pony mare with a pink coat, sandy yellow mane and tail, orange eyes, and a cutie mark of two lightning bolts. She is unnamed in the show, but she is named in merchandise.

Honey Rays' only appearance in the series thus far is in Winter Wrap Up. She appears on the weather team of Pegasi led by Rainbow Dash to clear clouds from the sky.

A mini-figure toy and collector card of Honey Rays were released together as part of the ninth waves of mystery packs. According to her collector card, Honey Rays "is as fast and cheerful as can be!" A November 6, 2013 "vorläufige Abbildung" image for mystery packs includes her, wearing her Winter Wrap Up vest. 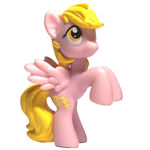 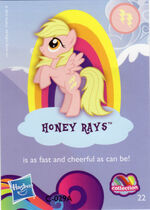 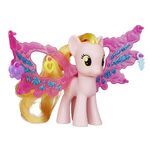 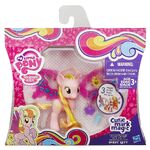