My Little Pony Friendship is Magic Wiki
Register
Don't have an account?
Sign In
Advertisement
in: Pages suggested for renaming, Pages that need improvement, Earth ponies,
and 2 more

Captain Hoofbeard is a male Earth pony who appears in the fifth story arc of the IDW comics' Friendship is Magic comic series. He is a notorious pirate and captain of the Salty Sea Mare.

Hoofbeard is an Earth pony with a brown coat, a black mane with a streak of dark red, and gold eyes. He has a X-shaped scar on his left cheek, an eye patch covering his right eye, a gold tooth, and his right hind leg is a peg leg (in a flashback he has all his legs). His accessories include hoop earrings, two gold necklaces—one with a diamond-shaped medallion, the other with three circular medallions—a row of gold beads woven into his tail, and a belt for his cutlass.

At the end of Issue #14, Hoofbeard is given fish fins and gills with Twilight Sparkle's magic.

Hoofbeard first appears in Issue #13 while the Mane 6 and Spike are vacationing in Horseshoe Bay. He initially doesn't give his name to the ponies, and they refer to him simply as "Captain". He approaches them in search of able stallions to be his crew, and finds an able and willing crew in them instead, with Rainbow Dash as first mate, Twilight as navigator, Applejack as cook, and Spike as his "parrot".

Hoofbeard tasks the ponies with finding his old crew and retrieving the "Map of the Wandering X", but he remains overly vague about his motives. During the voyage, he regularly has Spike throw messages in bottles into the ocean, which he claims are love letters. When asked by Applejack why he seeks the treasure so feverishly, he only says that he "cannot live without" it.

Twilight and her friends find out more about Hoofbeard—including his name—while retrieving the map. A former member of his crew explains that Hoofbeard was driven to madness searching for the moving "X" on the map, leading them to steal it from him.

Even after giving Hoofbeard the map in Issue #14, his goals remain unclear. When the ponies realize Hoofbeard is leading them in circles, they mutiny, seizing control of his ship and confining him in the ship's brig. When Fluttershy later speaks with the captain, he's shown to be more sad than angry about being locked up and unable to search for his treasure.

It's revealed that the treasure Hoofbeard's been looking for isn't riches, but a mermare he's fallen in love with named Jewel. However, the other mermares forbid their relationship due to it being "against mermare belief that land and sea can be one." Thanks to the actions of Fluttershy, the mermares change their mind and allow Hoofbeard and Jewel to be together.

Twilight uses her magic to give Hoofbeard gills and fins so he can go under the water whenever he pleases. Hoofbeard thanks the ponies for their service and sets out on another adventure alongside the mermares.

In the chapter book Daring Do and the Marked Thief of Marapore, chapter 1 narration mentions that although Captain Pony the Elder "was no pirate, the military stallion had a reputation for treating stowaways worse than Hoofbeard."

The Bestiary of Equestria pages 38 and 54 quote Captain Hoofbeard about his respective Froggy Bottom Bogg hydra and Luna ocean sea serpent encounters; the latter recounting is interrupted by Steven Magnet.

Captain Hoofbeard is a playable character in Gameloft's mobile game. His in-game description states "This legend among pirates sailed the Equestrian main for many moons in search of his treasure... Though few knew the exact nature of the priceless jewel he sought."

"The parrot stays with me. Makes me look stately, don't ye think?"
— Referring to Spike, Friendship is Magic Issue #13

"We're a rare breed—those who take their future by the hoof and never let go. Don't ever let go, brave Fluttershy."
— Friendship is Magic Issue #13

"Be it good or evil, I always keep me word, Ms. Sparkle. Always."
— Friendship is Magic Issue #14

"Don't ye know? True love always finds a way! Even when ye set it free, it will always come back to ye!"
— To the mermares, Friendship is Magic Issue #14

"Today, Rainbow Dash, you were the world's greatest pirate. Besides me, of course."
— Friendship is Magic Issue #14

"I were raftin' through Froggy Bottom Bogg when all'er sudden there were a great bubblin', like the very mud were risin' to suck me down, twas a fearful rollin' mud it were. But I kept the raft steady, by sheer force er' will and fancy hoofwork I kept er steady. Just as I thought the worst were over a great head rose in front of me as brown as the mud it rose from and with an anger in its eyes I knew it wanted a pony fer its supper. I gave it a great smack with me oar and the beast retreated to the depths. As quickly as it were gone it were back, this time from behind! I hit at it again, this time hard enough that my oar snapped right in 'arf. I thought that would be the end of it but it rose again at starboard and went for the bite with its mouth open wide! I managed to stick what was left of me oar in its jaw all vertical-like and it fell once again. As it rose for the final attack from port I turned and understood, this were no creature of great fortitude but four heads, as this one didn't have the oar stuck in its mouth. It took a bite out of me raft but they musta thought I was too much trouble as I managed to sail meself away afore the beast attacked again."
— The Bestiary of Equestria page 38

"Captain Hoofbeard 'ere. Let me tell yer a story of the great sea serpent. It was a dark and stormy night and I was sailin' the Luna ocean, sun gleamin' in the sky, clear water as far as yer eye could see. I spot a shadow no less'n 40 pony-lengths headin' straight fer me. The creature passed below my ship as I gave the order - a hard starboard and head fer land, I may be a brave soul but none, none I say can stand against the might of the sea serpent. With a deafenin' and terrible roar it leapt from the sea it did, and I saw the great scaled beast with dirty claws the size of swords and twice as sharp. [...] sea serpent is a cruel and terrifying [...] beneath the waves..."
— The Bestiary of Equestria page 54 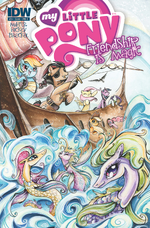 Hoofbeard on Friendship is Magic Issue #13 cover B 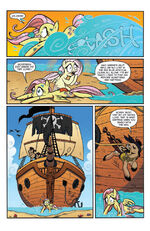 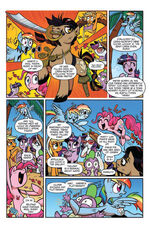 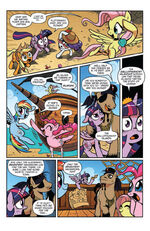 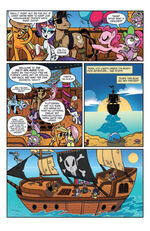 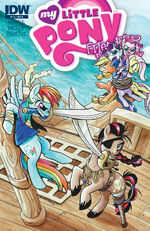 Hoofbeard on Friendship is Magic Issue #14 cover A 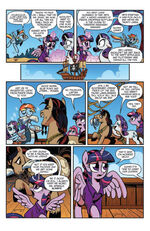 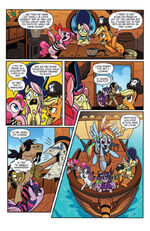 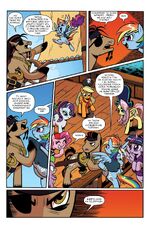 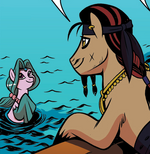 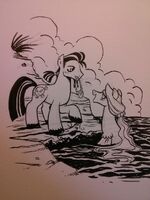