Horse Play is the seventh episode of season eight of My Little Pony Friendship is Magic and the one hundred and seventy-sixth overall. The title is a play on horseplay, referring to rough or boisterous playing.

In this episode, Twilight Sparkle casts Princess Celestia in her stage play, only to discover that Celestia's talents lie elsewhere.

Supervising director Jim Miller stated on Twitter that Celestia's "ones-versary" was originally only 1,000 years in the script.[1]

The episode begins at Canterlot Castle, where Twilight Sparkle shares with Princess Celestia her idea for commemorating Celestia's "ones-versary"—the one thousand, one hundred, and eleventh anniversary of when she first raised the sun. Twilight plans to put on a play at the School of Friendship, and Celestia is thrilled by the idea, having had a deep love for the theater ever since she was little.

Upon learning that Celestia has never been in a play herself, Twilight offers her the leading role in her own play. Celestia and Spike are uncertain about Twilight's sudden casting decision, but Twilight says she is more than happy to do something nice for someone who has always put others before herself. Celestia is especially uncertain because she has no acting experience, but Twilight assures her she doesn't need experience since she will be playing as herself.

Meanwhile, in Ponyville, the rest of Twilight's friends are busy preparing the stage for the play. When Twilight arrives and informs them that Celestia is now the leading actress, they have various reactions, from being overjoyed by the opportunity to spend casual quality time with her, to nervous at the same prospect, and Rainbow Dash flies off to tell everyone she knows.

Twilight and Spike oversee rehearsals for the play, and Fluttershy serves as the narrator. However, when Princess Celestia steps onto the stage for her lines, she either speaks too softly, too loudly, or too awkwardly. Later, while practicing the play's dance number, Celestia dances out of sync with the other actors and accidentally drops them through a trapdoor.

Twilight is unable to speak out against Celestia's poor acting out of fear of hurting her feelings, but she fears even more that Celestia will be humiliated in front of the audience. Applejack suggests telling Celestia the truth, and Spike suggests cancelling the play altogether since most of Equestria is unaware that a play is even being organized. Unfortunately, Rainbow Dash returns after already spreading the word and says everyone in Equestria will be attending. Despite Applejack's insistence, Twilight is determined to keep her promise to Celestia and let her be in the play.

At the School of Friendship, Twilight introduces Celestia to On Stage and Raspberry Beret of the Method Mares, who have agreed to give Celestia acting lessons. Meanwhile, the rest of the Mane Six salvage the damaged stage props, and Pinkie Pie tries to replace the sun prop with a large yellow balloon and a flaming marshmallow. However, Celestia makes little improvement, and Twilight continues to sugarcoat the truth about her poor acting skills.

The truth comes out

On opening night, as the audience seats fill to capacity, Twilight starts to panic. Applejack once again suggests telling Celestia the truth, but Twilight still refuses. Instead, she has rewritten the script to give Celestia a more artistic role with no lines. Pinkie Pie produces a giant ball of magical fireworks she bought from Trixie to replace the sun prop, but when it goes off and shoots fireworks everywhere, much of the stage set becomes damaged.

This sends Twilight over the edge, and in her fit of anger, she finally voices her frustration about Celestia's terrible acting, unaware that Celestia is standing behind a curtain and hears the whole thing. Upset by Twilight lying to her this entire time, Celestia flies off. Twilight follows after her while her friends stall the waiting audience.

In the sky over Equestria, Twilight tries to talk to Celestia, but she refuses to listen. Twilight admits that she wanted to do something to repay all the years that Celestia guided her as a teacher and friend, even at the risk of keeping the truth from her or disappointing her. Celestia tells her that the truth is always better than a well-intentioned lie, and she has an idea on how to save the play.

A New Day in Equestria

As Spike's efforts to stall the crowd fail, Twilight and Celestia return. Stepping down from her leading role, Celestia tasks Twilight, Applejack, Pinkie, and Rarity with calming the crowd and Rainbow Dash with making a new stage backdrop. She also appoints Spike as the new narrator and Fluttershy as the new lead actress. The play goes on as planned, and Celestia uses the techniques she learned from the Method Mares to assist the acting ponies from off-stage.

Despite some minor heckling from the audience, the play is ultimately met with very positive reception. Fluttershy feels sorry that Celestia didn't get to be in the play, but Celestia says she never felt she had to be on stage in order to be part of the show. Twilight thanks Celestia for saving the play, and Celestia says she plans to step down from the throne and devote all of her time to theater...

"...Gotcha! Maybe I'm not such a bad actress after all."
— Princess Celestia

Twilight Sparkle: To commemorate your first sunrise, I've written a play. We'd like to perform it at my School of Friendship, if you don't mind.
Princess Celestia: [giggling happily] Mind? Oh! Of course not! Oh! I think a play is a fantastic idea!
Spike: Did she just... prance?

Starlight Glimmer: I can't believe you've memorized your lines already, Fluttershy.
Fluttershy: Once you get past terrifying, paralyzing stage fright, the rest is easy.

Princess Celestia: [flat and stilted] It is time for a new day in Equestria-aaa.

Rainbow Dash: Uh... did I miss something?
Twilight Sparkle: Just the bright light of hope being snuffed.

Twilight Sparkle: Uh, Pinkie? That looks unsafe.
Pinkie Pie: Why would untested magic fireworks that I bought in a back alley from Trixie at midnight be unsafe?

Twilight Sparkle: I can't take it anymore! It was supposed to be a simple play! Just one simple play! And then everything goes wrong, from the stage to the props, right down to the worst! Lead! Actress! In Equestria!

Princess Celestia: You had good intentions, Twilight. But you know that the truth is always better than a well-meant lie. Didn't Applejack remind you?
Twilight Sparkle: [sighs] About a hundred times.

Princess Celestia: Fluttershy will be our new lead.
Fluttershy: Oh, my. Me? Playing you? While you watch me playing you? Oh, no. Oh, no. I think my stage fright is coming back. [hyperventilating]

Princess Celestia: I had so much fun tonight, I've decided to give up my crown, step down from the throne, and devote all of my time to the theater!
Twilight Sparkle Y-You... what?!
Princess Celestia: Gotcha! Maybe I'm not such a bad actress after all. 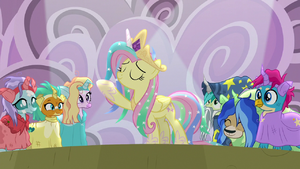