Humans are a species of sapient beings that is depicted and alluded to throughout the My Little Pony franchise.

On August 28, 2011, Jayson Thiessen was asked regarding the show "Humans? Please tell me that you will not add them at any point" and answered "heavens no!"[1] On August 5 and October 6, 2012, comic book artist Andy Price respectively stated regarding the comic "Humans: Nope. Nothing that does a major stray from what is established in the show"[2] and "WILL THERE BE HUMANS? No. We will not be changing the direction set by the show, nor will we introduce elements that do not fit the show."[3]

Humans have been alluded to on several occasions. In Sonic Rainboom, Pinkie Pie wears a foam finger representing a human hand while cheering for Rainbow Dash's performance, and while cheering for Maud's graduation in Rock Solid Friendship. Discord also wears one when he gets the idea of hosting his and Fluttershy's next tea party at his house in Discordant Harmony. A blue version appears in The Perfect Pear.

In Slice of Life, an image of four crew members for the show wearing horse masks and the co-director of Rainbow Rocks wearing a zebra mask appears as a single frame in the sequence when DJ Pon-3's electrical music cart crashes into the Twilicane. Additionally, Dr. Hooves questions Jeff Letrotski's use of the word 'man' as a verbal tic.

Humans appear throughout the My Little Pony Equestria Girls franchise. In the first film, Twilight Sparkle is transformed into a human when she travels to a world populated by humans with multicolored skin. While there, she meets human counterparts of her pony friends and other humans who strongly resemble ponies living in Equestria.

Various humans have appeared along with ponies in merchandise and in other media such as commercials, some humans being cartoon characters and others being played by live-action actors. Cartoon humans include characters who appear on some of WeLoveFine's My Little Pony Project 2012 art shirts, characters who appear in Electronic Arts' Hasbro iOS app Monopoly Hotels, and characters from other Hub-aired shows who appear in some of the channel's promotional crossover media.

Live-action humans include the both-self-played Katherine and Sophie in Unofficial Royal Wedding Pastry Chefs, the self-played Tori Spelling in nine Hub promos set around A Canterlot Wedding - Part 1 and A Canterlot Wedding - Part 2, the self-played Mallory Hagan in Hub promos set around Magical Mystery Cure, Gavin, Isabella, Elle on the Inside, Faye, Hannah, Amaryllis, Brendan, and others in PonyChat, young girls in other promos (with Princess Celestia in one for Target's Canterlot toys and other merchandise, with Princess Cadance in one for the Pony Wedding talking toy of her, with Pinkie Pie and Rarity in ones for the Pony Wedding toy of the Pony Princess Wedding Castle, and/or with Princess Twilight Sparkle in ones for the Friendship Rainbow Kingdom playset), students and a teacher at Hub High School with Rainbow Dash and Megatron from Transformers Prime in the Hub promo Hub High, and members of The Aquabats in The Aquabats! Super Show! episode Cowboy Android![4] and in some of The Hub's promotional crossover media.

The UK & Ireland version of Boomerang's promotional webpage[5] and commercial for their 2011 Make it a My Little Pony Christmas competition both show Santa Claus in silhouette, with his flying sleigh pulled by Fluttershy and Twilight Sparkle on the webpage and by Princess Celestia in the commercial. Santa Claus was similarly an unseen character in previous generations of My Little Pony.

An edited version of pre-Equestria Girls fanart of the Mane Six as humans[6] was posted by the official European Spanish My Little Pony Facebook page on June 26, 2015.[7]

In an Instagram Q&A, Grogar references stage magicians Penn and Teller, and Lord Tirek calls former wrestler-turned actor Dwayne "The Rock" Johnson one of his idols.[8]

A human outline on the wall. 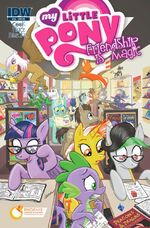 Phoebe Grizelda Howell in a picture with Marigold Heavenly Nostrils.

A human, The M.C. Bat Commander, with Pinkie Pie.

Dan, from Dan Vs., in a Hub Summer Pool Party commercial bumper. 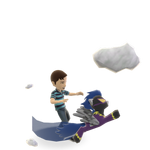