Igneous Rock Pie and Cloudy Quartz, also called Pa Pie and Ma Pie respectively, are two married Earth ponies and members of the Pie family who live on a rock farm in Equestria. They are the parents of Limestone Pie, Maud Pie, Pinkie Pie, and Marble Pie.

Igneous Rock and Cloudy Quartz first appear in Pinkie Pie's flashback in The Cutie Mark Chronicles in which Pinkie throws a party to spread cheer to her family. Shocked by the party at first, Igneous and Cloudy slowly smile and join in the festivities.

Igneous Rock and Cloudy Quartz appear in a photo with their daughters in Pinkie Pride.

Pinkie alludes to her mom and dad in The Cutie Map - Part 1 when she sees the rock farm on the eponymous map. In Make New Friends but Keep Discord, Cloudy Quartz is indirectly mentioned by Pinkie because Pinkie originally invited her to the Grand Galloping Gala. In Party Pooped, Applejack finds plans in Pinkie Pie's secret party-planning room for Igneous Rock and Cloudy Quartz's fiftieth, one-hundredth, and five-hundredth anniversaries.

Igneous Rock Pie and Cloudy Quartz have major roles in Hearthbreakers when the Apple family and Pie family spend Hearth's Warming Eve together. In this episode, they are depicted as stereotypically Amish, speaking in old English and acting very traditional. Initially unreceptive to the Apples' traditions, Igneous Rock and Cloudy Quartz eventually come to accept them, with Igneous even trying to adopt some of Granny Smith's country mannerisms.

According to the two, they were arranged to be married by a "Pairing Stone".

In the holiday special My Little Pony Best Gift Ever, Igneous and Cloudy appear celebrating Hearth's Warming Eve with their and Applejack's families.

Igneous and Cloudy briefly appear in Pinkie Pie's group shot during The Magic of Friendship Grows in The Last Problem.

Pinkie's parents' mention by Applejack in Party Pooped reappears in Cakes for the Memories.

In My Little Pony: Friends Forever Issue #9, Igneous Rock, Cloudy Quartz, and their daughters appear in present day on page 3. They also appear on page 24 of the My Little Pony Holiday Special 2017 comic.

In My Little Pony: Friendship is Magic Issue #86, Igneous and Cloudy appear while Maud is planning Marble's party.

In Pinkie Pie and the Rockin' Ponypalooza Party!, Igneous Rock and Cloudy Quartz visit Pinkie Pie in Ponyville. They appeal to Twilight Sparkle for help in saving their rock farm, which they are in danger of losing due to rivaling businesses. Though they initially brush off Pinkie's suggestions because she doesn't take anything seriously, Igneous Rock and Cloudy Quartz turn to her for help in the end because of her utter devotion to her family.

In Rarity and the Curious Case of Charity, Rarity receives an invitation to Cloudy Quartz's birthday party in the mail.

Igneous Rock and Cloudy Quartz are available characters in Gameloft's mobile game, added to the iOS version of the game on June 4, 2014 and to the Android version of the game on June 10, 2014. The two serve as an enemy minion and boss, respectively, in "The Pinkie Parents Problem" event, the story of which revolves around Pinkie's efforts to understand her parents. Igneous Rock's in-game description states, "Igneous Rock rocks at rock farming, rock collecting and rocking his precious daughters to sleep." Cloudy Quartz's in-game description states, "Cloudy Quartz is the matter-of-fact mother of Pinkie Pie, Marble Pie, Maud Pie and Limestone Pie."

In Enterplay's collectible card game, card α #29 C of Igneous Rock lists his name with a trademark symbol and gives him the description "Pinkie Pie's father runs the most successful rock farm in Ponyville history. His sedimentary rock collection is the envy of absolutely nopony."

In the card game's Canterlot Nights expansion set, card #30 C of Cloudy Quartz lists her name with a trademark symbol and lists the quote "When I 'went wild' as a filly, I ate an entire bag of rock candy in one sitting. When Pinkamena Diane goes wild, it's on the front page of the Ponyville Express..."

IGNEOUS ROCK PIE and CLOUDY QUARTZ, also known as Pa and Ma Pie, were arranged to be married by a Pairing Stone. They're proud rock farmers and even prouder parents.

Igneous Rock: We better harvest the rocks from the south field.
Cloudy Quartz: Pinkamena Diane Pie! Is that you?

Igneous Rock: Surely thy name is not but Granny Smith. I am called Igneous Rock Pie, son of Feldspar Granite Pie.
Cloudy Quartz: Thou shalt know me as Cloudy Quartz.
Igneous Rock: May Providence favor thee well, and to thou comfort our humble homestead bring.

Cloudy Quartz: We were chosen by the Pairing Stone and betrothed within a fortnight.
Igneous Rock: The choosing stone decreed, "Thou shalt love one another." And lo, it was so.

Igneous Rock: Your older sister is keeping an eye on the farm.

Cloudy Quartz: Ever since that Crystal Empire showed up again, all anypony wants are stones that shine, sparkle, and shimmer! Plain old rocks are boring.

Igneous Rock: It's... the silliest idea I've ever heard in m' life! This is not something one of your parties can fix. Why can't you be serious for once, Pinkamena?

Cloudy Quartz: We're so sorry, Pinkamena, dear. We didn't mean to hurt your feelins'. We've just been under so much stress about losin' the farm and, well... we didn't think you'd understand. You've always had such a sunny outlook on things!

Igneous Rock: How did our little Pinkamena do all this? I've never seen so many ponies in my whole life!
Cloudy Quartz: And they all came out to help us? 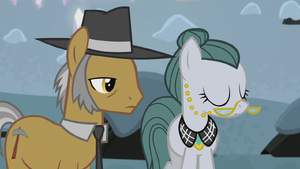