Certain characters in the series are not sentient creatures, and most are not even living things, and they mostly play a part as characters only in other characters' minds. This article covers the more prominent non-sentient characters.

Bloomberg is the name of an apple tree that Applejack and her friends take to Appleloosa in the episode Over a Barrel. Applejack treats it as if it were a baby, cooing and talking to it as if it were an infant. Additionally, Bloomberg even has its own bed on the train and Applejack reads it bedtime stories. Spike, in an effort to escape the noise of the others during the trip, seeks the company of Bloomberg so that he can sleep in peace. At the end of the story, Applejack looks proud as it is planted on top of a hill in the Appleloosa orchard.

Series 2 of Enterplay's trading cards includes a card featuring Bloomberg, #41. Both sides of the card list its name with a trademark symbol, and the back of the card includes the description "Applejack's favorite little tree isn't such a little tree anymore! In just one day, Bloomberg set a whole herd of world records—first tree to travel first class, first tree kidnapped by buffaloes, and first tree to be mistaken for Fluttershy! Bloomberg eventually found his place as king of the Appleloosan apple orchard, but secretly, he still misses Applejack's bedtime stories."

Being a fruitful tree, Bloomberg is the only inanimate "character" on this list that is technically alive.

Boneless is the name of a rubber chicken that Cheese Sandwich travels with in Pinkie Pride. It mostly rides in a saddle on Cheese's back. During The Goof Off, a live-action puppet version of Boneless is shown, which was filmed by Jayson Thiessen in his basement. The puppet was made of balloons and rice.

In a flashback during Cheese Confesses, Cheese Sandwich is shown to have come into possession of Boneless when he attended a party thrown by a filly Pinkie Pie.

At the end of Pinkie Pride, Cheese Sandwich gives Boneless to Pinkie Pie as a memento of his Ponyville visit. He then sets out with a second rubber chicken, Boneless Two.

A sixth iteration of Boneless appears in the future shown in The Last Problem with an older Pinkie Pie and her and Cheese's son Li'l Cheese.

In the magazine​[​specify​]​ comic The Quest for the Lost Toy!, Boneless—as a rubber chicken again—is magically summoned to Sugarcube Corner.

Boulder is the name of Maud Pie's pet rock, which she is mostly shown keeping in her pocket. She treats Boulder as if it were alive, placing it in front of her sandwich at a picnic as if it were eating, and describing a game she and Boulder like to play called "Camouflage" in which players search for Boulder in a field of rocks, which she says is "like hide-and-seek, but way more intense." Fluttershy is complimentary toward Boulder, calling it "really sweet". During her train ride home, Maud takes Boulder out of her carrying bag and fiddles it around her hoof.

Boulder also appears with Maud's human counterpart in My Little Pony Equestria Girls: Rainbow Rocks. She dumps a box of crackers onto it, claiming it's hungry.

Boulder appears again in The Gift of the Maud Pie. The episode revolves around Pinkie trying to get a special pouch for Boulder. Maud also claims it has a cousin and that she first met Boulder on a dark and stormy night.

In Rock Solid Friendship, Rusty Tenure, the headmaster of Maud's school, identifies Boulder as magnesium-rich basalt. It is also revealed that it is over two thousand years old.

In Uncommon Bond, Boulder somehow gets in contact with the water from the Mirror Pool, resulting in two Boulders.

In The Maud Couple, Boulder gets a new "playmate" in the form of Mudbriar's pet stick, Twiggy.

Brutus Force is a doll of Shining Armor's from when he was a colt introduced in The One Where Pinkie Pie Knows. According to Twilight Sparkle, Shining Armor "used to carry him around like his baby."

When Shining Armor and Princess Cadance visit Ponyville, Twilight surprises her brother by decorating one of the rooms in her castle with things that he liked as a colt, one of them being Brutus Force. When Shining Armor is brought to the room, he happily reunites with the doll.

In the magazine​[​specify​]​ comic The Quest for the Lost Toy!, Brutus Force—wearing a proportionally-smaller version of the hat Rarity wears in Sweet and Elite and My Little Pony: Friendship is Magic Issue #3 The Trials of Hayseed Turnip Truck—is stated by Sunburst to have been given from Shining Armor to Flurry Heart.

Holder's Boulder is introduced in Hearthbreakers.​[​specify​]​ In Gameloft's mobile game, Holder's Boulder is a Hearth's Warming seasonal decor item. Holder's Boulder is also featured on Enterplay collectible card game Marks in Time #18 R, according to which "Limestone Pie doesn’t like to talk about it, but when she was just a little filly she used to call Holder’s Boulder her pet rock. Maud Pie always looked up to her big sisters, and that’s part of why she ended up adopting her own Boulder as a pet!"

During the episode Party of One, Pinkie Pie comes to the conclusion that Twilight Sparkle, Applejack, Rarity, Fluttershy, and Rainbow Dash are avoiding her latest party, believing they no longer want to be her friends. She soon replaces them with inanimate objects. These "new friends" are:

While Pinkie Pie puppeteers and voices the objects, in her mind the objects are moving and speaking on their own. They denigrate Pinkie's friends, persuade her to leave her old friends, and praise her when she agrees. They also try to prevent Rainbow Dash from taking Pinkie to her surprise party. The imaginary party ends when Pinkie is dragged by Rainbow Dash to the Sweet Apple Acres barn house, where she attends a party celebrating her birthday, secretly organized by her friends.

Mr. Turnip and Sir Lintsalot appear as two of Pinkie Pie's friends on her MyStable page in the My Little Pony: Equestria Girls Holiday Special.

Shelly and Sheldon are Princess Skystar's "friends" who are actually two clams with googly eyes pasted onto them, who appear in My Little Pony The Movie. She most likely created them out of loneliness, and claims that they get "jealous" of any new friends when the Mane Six tell her they cannot stay in Seaquestria. After Twilight Sparkle gets caught trying to steal the transformation pearl, she has a discussion over what she did with them and decides to help Twilight's friends rescue her. Shelly and Sheldon prove useful in the final battle when Skystar uses them to take out a Storm Creature. Shelly and Sheldon also appear in the end credits.

Smarty Pants is Twilight Sparkle's old doll from when she was a filly, and is introduced in the episode Lesson Zero. According to Twilight, Smarty Pants comes with a notebook and quill so that it can pretend she's doing her homework.

When unable to find and solve a "friendship problem" to relate to Princess Celestia, Twilight exclaims that she is going to create one herself. She takes Smarty Pants out of a blue and gold chest in the library and presents it to the Cutie Mark Crusaders, trying to provoke an argument between the fillies that she can solve by emphasizing the importance of sharing.

However, her plan goes rotten when the Crusaders turn out to be unenthusiastic about the ragged old doll. Twilight enchants the doll with a "want it, need it" spell, which makes the Cutie Mark Crusaders fight over who gets to play with it, much to Twilight's delight. However, she doesn't manage to break up their fight, and asks Big McIntosh, who is passing by, for assistance. He retrieves the doll, but falls under the spell and takes it for himself, eventually causing a mob of Ponyville's citizens to desire and fight over the doll.

The doll is abandoned by most of the ponies when Princess Celestia intervenes and lifts the spell, but Big McIntosh, showing a genuine want for the doll, runs off with it. In Ponyville Confidential, a picture of him cuddling the doll appears in a Gabby Gums article.

Smarty Pants is featured again in Twilight's flashback in A Canterlot Wedding - Part 1. Magical Mystery Cure shows the doll again in a flashback during Celestia's Ballad.

The doll can be seen under Apple Bloom's bed in Somepony to Watch Over Me.

The doll is one of several options for gifts Maud decides for a gift for Pinkie in The Gift of the Maud Pie.

A mini-figure toy of the doll has been displayed at the 2013 New York Toy Fair.[2] Little, Brown's My Little Pony Friendship is Magic official guidebook My Little Pony: The Elements of Harmony lists Smarty Pants by name and appearance.[3]

Series 2 of Enterplay's trading cards includes a card featuring Smarty Pants, #43. Both sides of the card list its name with a trademark symbol, and the back of the card includes the description "A little known fact – without Smarty Pants, Twilight Sparkle may never have gotten into Celestia’s School for Gifted Unicorns! Studying at Twilight’s side, Smarty Pants took notes with her quill and notebook, and between lessons she built excellent book forts. Now happily owned by Big Mac, Smarty’s skill with fancy mathematics is a big help in balancing the Apple Family checkbook." In the IDW comics, Smarty Pants appears on My Little Pony Micro-Series Issue #6 page 3 and My Little Pony: Friendship is Magic Issue #10 cover RI, before making a more extensive appearance in My Little Pony: Friendship is Magic Issue #40.

Tom is the name Rarity gives a large rock in The Return of Harmony Part 2, thinking that it's a diamond. The name Tom is after Tom Sales, a storyboard artist on the show.[4]

Rarity, while under the influence of Discord in The Return of Harmony Part 1, digs through a slab of rock which has three gems reminiscent of her cutie mark embedded in it. She breaks apart the rock and extracts a large diamond, acting fawning and protective towards it. When Twilight Sparkle arrives, the "diamond" appears as a simple boulder, making it clear that only Rarity sees it as a diamond. Rarity refuses to part with it for the majority of both episodes, and Twilight even helps Rarity carry it in hopes of eliciting a positive response from her.

In Part 2, Twilight asks her friends into her library, but Rarity remains outside and says she's on to Twilight's plan to steal "Tom" from her, addressing the boulder by name. Resigned, Twilight carries the boulder inside for Rarity and crashes it through the door, leaving a giant hole in the wall. Later, as the other ponies venture back outside, Rarity delays in order to push "Tom" ahead of her. Twilight magically levitates the rock, then the scene cuts to outside the library, and Twilight is heard exclaiming "Look out, here comes Tom!" before the boulder flies out the window, leaving another giant hole in the wall.

Near the end of the episode Twilight reverts Rarity to her normal self, and the illusion that the boulder is a diamond goes away. She rolls it out of her house and asks her friends never to speak of it again. Applejack speaks of it again later in the episode when the ponies are getting Rainbow Dash to rejoin them, much to Rarity's annoyance.

In My Little Pony: Friendship is Magic Issue #41, Tom appears on page 18 with Maud Pie.

According to his Series 2 trading card, Tom is the rock used in Too Many Pinkie Pies to close up the entrance to the Mirror Pool.

Twiggy is the name given to a small stick Mudbriar regards as a pet, similar to Boulder. Twiggy's name is the same as Twilight Sparkle's pseudonym in My Little Pony: Friends Forever Issue #30. 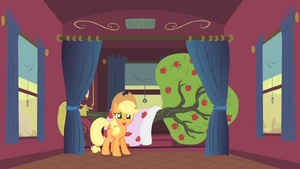 Retrieved from "https://mlp.fandom.com/wiki/Inanimate_objects?oldid=2165274"
Community content is available under CC-BY-SA unless otherwise noted.