Inspiration Manifestation is the twenty-third episode of the fourth season of My Little Pony Friendship is Magic and the eighty-eighth episode overall. When Rarity loses her creative mojo, it's up to Spike to get it back.

This episode is listed on Zap2it as the twenty-fourth episode of the fourth season.[2]

In June 2013, Meghan McCarthy wrote a tweet about this episode: "Rarity? Check. Spike? Check. Ridiculous early '90s pop culture reference? Check. #MLPSeason4".[3] In early May 2014, during the live interview on "Hub Network's What's the Hubbub?" together with Tara Strong, Meghan specified she was referring to the early '90s TV sitcom Saved by the Bell.

The Foal and Filly Fair

All of Ponyville is busy preparing for the Foal and Filly Fair, a festival dedicated to the colts and fillies of Ponyville. At Carousel Boutique, Rarity is hard at work making her own creative contribution to the fair: a lavish puppet theater. She thanks Spike for his help and calls him her "favorite dragon", a compliment that causes Spike to blush.

Rarity is pleased with her own work, but Claude, the puppeteer pony she made the theater for, is utterly dissatisfied, criticizing its lack of mobility and room for his puppets. As Claude walks off in a huff, Rarity runs off in tears.

Rarity returns to the Boutique and wails over her failure to impress. Spike suggests that she make something else for the fair, but Rarity doesn't think she'd have anything finished in time. She sobs hysterically and starts wolfing down a carton of ice cream.

Determined to help Rarity out of her creative funk, Spike goes to the Castle of the Two Sisters with Owlowiscious and searches through the library for a spell that can help. Through Owlowiscious' hooting, Spike understands that he believes they shouldn't use magic. During his search, Spike uncovers a hidden chamber behind one of the bookshelves. Inside, he finds a spell book made of stone and with spikes on the front cover. Oblivious of the danger of taking the spell book from its hiding place and Owlowiscious' hooting warnings, Spike opens the book and finds the "Inspiration Manifestation" spell that "instantly brings ideas to life".

Spike returns to Rarity, who's now gone through several cartons of ice cream, and shows her what he found. Rarity brings herself out of her despair to try the spell:

"From in the head to out in the world, every thought to action. Hold close this book and through its spell, you'll start a chain reaction. Projecting forth whatever beauty you see. Only when true words are spoken will you finally be set free."
— The "Inspiration Manifestation" incantation

As a result of casting the spell, Rarity's magic aura turns green. With the spell's magic, Rarity transforms the stone spell book and her couch using only her thoughts. She returns to Claude with a puppet theater more to his liking and earns his approval. After a successful Foal and Filly Fair, Spike decides to return the spell book to where he found it, but Rarity convinces him to let her hold on to it a little longer. Spike doesn't see any harm, but Owlowiscious is less than certain.

When Spike goes to the Boutique the next day, he's overwhelmed by an avalanche of dresses when the front door opens. A slightly manic Rarity pulls him inside, and he finds the Boutique packed with dresses Rarity spent all night making. She decides to extend her newfound creativity to all of Ponyville and asks for Spike's support, which he readily gives.

Rarity begins her beautification of Ponyville by transforming Applejack and Granny Smith's ordinary apple cart into a lavish one studded with jewels. An impressed Spike suggests asking Applejack to give all of her carts the same treatment, but Rarity wants to keep the changes she makes around town a secret from other ponies.

Next, Rarity gives Rainbow Dash a cumbersome dress while she's in the middle of busting clouds; she turns one of Fluttershy's bird houses into a bird mansion that her bird friend Mr. Robin gets lost inside; and she gives a foal birthday party a "touch of class" by replacing the food with hors d'oeuvres, the clown with the waiter Savoir Fare, and the mariachi trio with a string trio consisting of Octavia Melody, Parish Nandermane, and another Earth pony.

Spike sees that ponies are less than pleased with Rarity's changes, but he can't bring himself to tell her to stop. Rarity gives Spike a suit of crystal armor and runs off to make more changes around Ponyville, leaving Spike behind. Twilight Sparkle then finds him and sees that whatever is happening around town has happened to him as well. She asks him if he's seen anyone suspicious, but he keeps Rarity's secret and says no. Twilight goes with Mayor Mare to assist the trapped ponies Royal Riff and Berryshine, while Owlowiscious glares disapprovingly at Spike. Although Spike realizes he must reveal Rarity's secret, he is afraid to do so as it could cost him her friendship.

Unable to bring himself to divulge Rarity's secret, Spike determines that the next best way to stop Rarity is to get the spell book away from her so she can't harness its magic. He follows Rarity's path of creative destruction and finds her on the outskirts of Ponyville. While Owlowiscious distracts Rarity, Spike snatches the spell book from her and sneaks away. Rarity catches Spike, so he hides the book in his mouth and swallows it down whole.

Unfortunately, Rarity is still under the influence of Inspiration Manifestation. Spike is shocked by this development, and though Rarity is initially upset by the loss of her book, she doesn't need it anymore in order to use its magic. She crafts four chariots (or "Rariots" as she calls them) and plans to spread her creative genius to all of Equestria.

Before the situation gets even more out of control, Spike tells Rarity the truth: that the changes she's been making around Ponyville are awful. Rarity is aghast at Spike's words, and the magic of Inspiration Manifestation finally wears off. Spike suddenly remembers the last part of the spell — "only when true words are spoken will you finally be set free" — and realizes his telling Rarity the truth was what broke the spell's hold. Rarity tells Spike he should never be afraid of telling her the truth, and the two share a friendly hug.

At the Golden Oak Library, as Spike writes down his lesson in the friendship journal, Twilight enters and scolds him for taking a book from the old castle library without permission. She collapses onto her bed, exhausted from cleaning up Rarity's magical mess with Princess Luna and Princess Cadance. In response to Twilight's anger, Spike simply says, "You don't look so good," angering her even more.

"What? I'm just being honest! It's what good friends do!"
— Spike

The Foal and Filly Fair is a Ponyville-held event partly featured in the episode. As the name suggests, it is a festival dedicated to the colts and fillies of Ponyville. Activities and entertainment seen in the episode include various carnival games—such as a ball toss game, a dart-throwing game, a high striker game—Claude's puppet show, and treats provided by Mr. and Mrs. Cake.

Claude: This is awful!
Rarity: Awful?!

Rarity: Oh, forget it, Spike. I'd never have something finished in time! [crying] [nomming] I wanted to leave my creative mark on the fair, and I failed – [chewing] miserably! And that makes me miserable! [crying]

Spike: If I wasn't supposed to have it, it wouldn't be so easy to get. And it's covered in spikes, like me.

Rarity: Leave me be! Can't you see how distraught, disappointed, and downtrodden I still am?
Spike: But I brought you something.
Rarity: Unless it's another carton of vanilla oat swirl, or word that the festival has been canceled, I don't think I'm interested. 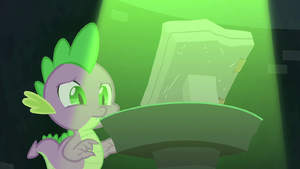