Cakes have a bevy of options.

Foal and Filly Fair, huh? Ponyville has way too many festivals!

Hey, it's Pinkie with balloons!

Wonder what DJ Pon-3's got to offer at the fair?

Finally! Another appearance by Sweetie and Rarity's parents!

Who needs wings when you can have balloons?

Bulky came to test his strength.

Passin' by Carousel Boutique without dropping by, Pinkie Pie?

Sprucing things up as usual.

"You're the one making it."

"Couldn't have done it without the help of one of my dearest."

"You are my favorite dragon."

"When we hear those three little words!"

"This is awful!" Not the three little words she was hoping for.

Just look at this.

That wheel lacks the right number of spokes.

Not to mention Rarity stole a pirate's peg leg.

The vases make the space even more cramped.

Meghan McCarthy was right! Those puppets are creepy!

Spike approves of everything that Rarity makes.

*sigh* It's not that bad.
Add a photo to this gallery

A lack of inspiration

Rarity on her trademark fainting couch.

Looks like her current predicament is really affecting her dramatic emotions.

Wait. How many times did I say "puppet theater"?

You can just contribute in a different way

Alternative (scrapped) titles such as "Lesson Zero II" or "The Bedazzling".

"I'd never have something else finished in time!"

"I wanted to leave my creative mark..."

But not too miserable, because ice cream can't eat itself.

The foreboding ruins of the Castle of The Royal Pony Sisters.

An answer to Rarity's predicament can be found in that library?

There's gotta be something in here somewhere.

"Can I find anything in time for the fair?"

"She said I'm her favorite dragon"

Pulling out one of the books.

"C'mon and help a dragon out!"

Twilight's pet in a shelf.

Spike moving with the rolling ladder.

Okay, Owlowiscious has now joined the ranks of characters on this show who can teleport offscreen.

This is the "Inspiration Manifestation" spell book. All craftsponyship is of the highest quality. It is decorated with an encircled eight-pointed star. It is made of stone, and menaces with spikes of stone.

I'm going in there! Spike may be a baby dragon, but his flames are still way too much, melting the ancient padlock's shackle down into nothingness.

Bathed in evil green light... I should pick it up...

When you removed the book from the cradle, did you speak the exact words?

Look, maybe I didn't say every single little tiny syllable, no. But basically I said them, yeah.

As if you needed further proof occupants of Ponyville defy gravity

How can he be that oblivious?

Sure beats some Indiana Jones parody.
Add a photo to this gallery

"But I brought you something."

"Unless it's another carton of vanilla oat swirl..."

Wait! Did Spike give her those chocolates?

"This should help you think of something in time for the fair."

What harm could possibly happen from a little ol' spell?

"There's only one way to find out."

The book just got Rari-fied.

So does the sofa.

"We must find the puppeteer right away,..."

"...so that I may provide him with the most fantastic theater he's ever imagined!"

Keep that book safe and sound!

"Come to see the show, I presume?"

Good luck sleeping tonight, folks. Try getting these two creeps out of your mind.

"Much more to your liking!"

Hah...wait'll you see what happens to Ponyville!

"That was never the problem now, was it?"

"Oh, well, this one does seem to travel."

"Plenty of room for my puppets!"

"She'll keep it for a few more hours."

There's got to be a lot of dresses in there if that's going to happen!

Rarity having her Lesson Zero moment.

"I've been up all night just creating!"

"You will support me in this endeavor."

"Oh, this is not good."
Add a photo to this gallery

Taking "Inspiration" to a new level

"No time for breakfast!"

"This is exactly what I'm talking about!"

"Are my eyes playing tricks on me again?" Maybe, unless it magically appeared (which it did).

"What in rhubarb pie just happened?"

"Especially when they're gorgeous ones!"

Now that's what I call adorable.

Well, she can always take it off. Right?

Who designed the interior of that house? M.C. Escher?

Now Owlowiscious is really ticked off.

Shrimp? In MLP? I thought they were herbivores! If you look closely, you'll see shrimp!

Pinkie Pie is silenced. That's a first.
Add a photo to this gallery

Owlowiscious looking down at Spike.

Is she thinking what I think she's thinking?

This is Mario! Spike is Bowser and Rarity is evil Princess Peach.

"What do you mean not me too?"

One that'll keep the griefers away.

It's my mayoral duty... to defer to the next highest authority.

What does Owlowiscious think he is? Spike's father?

"I promised I'd keep this to myself!"

I can forget about having anymore "Sparity" moments.

Oh, of course it's Berryshine.

Twilight and the Diamond Town Hall

Spike getting an idea.

Why didn't I think of this before?

"I'm... guessing she went that way."
Add a photo to this gallery

"What do you think you're doing?!"

Ugh! Get out of my face, dumb owl!

So now we know that Spike can swallow a book... whole!

"What have you done with my book?!"

Great, Spike. I try to help you to stop a demonic friend, and then you frame me.

Rarity making a realization. That can't be good!

Time to stop supporting Rarity, and stand up to her!

The amnesia thing again? What is this? My Little Pony or Days of Our Lives?

A terrifying, yet quite nice, view of Ponyville!

The sweetest Sparity moment of the season.
Add a photo to this gallery

"...take another book from the library at the castle without asking!"

"Princess Cadance and Princess Luna have better things to do than to help me clean up Ponyville!"

"Do you have any idea how hard it was to reverse that much dark..."

"What? I'm just being honest."

"It's what good friends do." 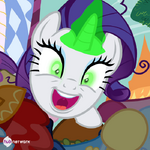 Rarity's changeling for the better (or worse).

Is this My Little Pony or Aladdin?

Rarity drowns her sorrows with her only two real friends...Ben and Jerry.
Add a photo to this gallery
Retrieved from "https://mlp.fandom.com/wiki/Inspiration_Manifestation/Gallery?oldid=2139410"
Community content is available under CC-BY-SA unless otherwise noted.