My Little Pony Friendship is Magic Wiki
Register
Don't have an account?
Sign In
Advertisement
in: Events, Featured articles
English

The Iron Pony competition is a series of 20 athletic competitions between Rainbow Dash and Applejack featured in the episode Fall Weather Friends. The name is inspired by the "Ironman Triathlon".

The competition is the result of Dash's challenge to Applejack to prove once and for all who is the top athlete in Ponyville. With Twilight acting as judge and Spike commentating, originally only Pinkie Pie, Rarity and Fluttershy come to spectate, but as the competition progresses a large number of townsponies arrive to watch.

Only 12 of the 20 events are shown, with eight in the first part and four in the second.

The barrel weave is the first event of the competition. Each competitor runs a zigzag pattern through a row of barrels as quickly as possible with a five-second penalty for each barrel hit. Applejack runs first, completing the course in 17 seconds, but she hits one barrel for a total of 22 seconds. Rainbow Dash follows with an 18 second run with no penalties, giving her the victory.

Setting up the course.

For this contest a variation of a high striker carnival game is set up. Instead of hitting a lever with a mallet to send the weight up, each pony bucks a target at ground level. Although Rainbow succeeds in ringing the bell, Applejack's buck smashes the target and knocks the bell off, breaking the meter, giving her the win and tying the score at 1-1. "Years of applebuckin'," she explains, and kicks the tree that Rainbow Dash is sitting underneath, which knocks some apples onto Dash's head to the tune of Shave and a Haircut.

...and the look of amazement on her face after.

Next, each pony tries to throw Spike off her back as quickly as possible. Applejack's strategy is to buck her entire rear end into the air, while Rainbow bounces her entire body up and down like a jackhammer. Rainbow achieves the faster time to take a 2-1 lead overall.

Each pony now has to lasso Spike, who wears a horned helmet to stand in for a bull. Applejack quickly drops her lasso around all four of Spike's limbs and hogties him to win this event; Rainbow Dash fails and gets tangled in her own rope to end up hanging upside down from a tree. The score is now 2-2.

The two ponies and their lassos

...While Rainbow Dash gets stuck in a tree.

In the fifth event, both competitors must bounce balls off their heads repeatedly, a throwback to Rainbow's attempt at setting a world record in Dragonshy, as many times as possible. Applejack loses her balance and falls flat as her ball bounces away and ends up balanced on one of Rainbow's hooves as she keeps bouncing her own ball. Rainbow wins the event and takes a 3-2 lead.

Rainbow Dash showing her skills to win the event.

Each competitor throws a hay bale for distance. Rainbow's throw lands at the far end of the track, but as she taunts Applejack, the latter's bale slams down on top of her and lands slightly farther downrange. This performance wins the event for Applejack and ties the score at 3-3.

The seventh event is a hoof-wrestling match, similar to the one depicted in The Ticket Master. Rainbow quickly beats Applejack, forcing her to the ground in the process, and takes a 4-3 lead.

For the eighth event, each competitor kicks an American football as far as possible. Rainbow's kick sails under several Pegasi who are watching from a cloud, but they have to duck in order to avoid being hit by Applejack's ball. It nearly hits Fluttershy as well and knocks the score placard out of her grip before she can hang it up to give Applejack the victory. The placard lands neatly on the scoreboard, leaving the ponies tied 4-4.

The ninth and tenth events do not appear in the episode, but Spike notes that the score at the halfway point is 5-5. The eleventh event is a push-up contest. Both ponies are able to do 99, but Applejack collapses at this point while Rainbow uses her wings to push herself up one more time and win the event.

Each pony runs up to a line and jumps for distance, landing in a sand-filled pit, with Applejack going first. When Rainbow jumps, she realizes that she will fall short; using her wings, she is able to hover just off the ground and push herself far enough ahead to win.

Here, each pony is given four baby chicks and has to carry them on her back down the length of a mud-filled trench, where a mother hen is waiting at the other end. Applejack's trotting stirs up so much mud that her chicks quickly jump over to Rainbow, who lets all eight chicks ride on her spread wings in order to stay clean and dry. She wins the event.

Wings aren't just for flying, after all.

The final event is a tug of war. Standing on opposite sides of a mud pit, the ponies take the ends of a rope in their teeth. A red flag is tied at the midpoint, presumably for determining a winner after a certain period of time had elapsed. As Applejack drags Rainbow toward the mud, Rainbow goes airborne, hauling Applejack off the ground, and tricks her into letting go of the rope. Applejack falls in the mud, losing the event and giving Rainbow a 15-5 victory in the overall competition, to which Applejack then accuses Rainbow of cheating for using her wings. 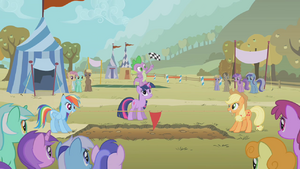