My Little Pony Friendship is Magic Wiki
Register
Don't have an account?
Sign In
Advertisement
in: Male characters, Antagonists, Creatures,
and 4 more
English

Iron Will is a male minotaur and supporting character who first appears in the season two episode Putting Your Hoof Down. He travels around Equestria, holding assertiveness seminars. He has a habit of referring to himself in the third person and using various, often rhyming, catchphrases, such as, "When somepony tries to block, show them that you rock!"

The writers and directors had a wrestler-type person in mind for Iron Will, which storyboard artists Joel Dickie, Emmett Hall, and Jim Miller later envisioned as professional wrestler Hulk Hogan, giving Iron Will poses that mimic Hogan.[2] Trevor Devall's inspiration for Iron Will's voice came from "listening to Paul Dobson do a Jesse Ventura impression,"[3] although he admitted that the directors asked for elements of Mr. T as well.

On Twitter in mid-December 2015, IDW comics writer Jeremy Whitley was asked, "Was there meant to be more done with Flim, Flam, Iron Will, and Lightning Dust that got cut? They just kinda...disappeared.", and replied, "I'd actually like to do a ff[sic] with LD and IW. I stand by Flim and Flam as unrepentant opportunists".[4]

Iron Will first appears in a flash of fireworks at his seminar in Ponyville. After putting the audience in a frenzy of enthusiasm, Iron Will proclaims that his methods would work for anyone and without any dissatisfaction. He first demonstrates his methods with Fluttershy acting as a volunteer. He gives Fluttershy advice on how not to let anyone treat her as a doormat or a pushover, with a 100% satisfaction guarantee, or she doesn't need to pay.

After hearing around town that Fluttershy "doesn't take no guff from nopony," he soon comes over to see Fluttershy in order to collect the bits she owes him for the assertiveness program. Rarity and Pinkie Pie, who had come over to confront Fluttershy about her recent reclusive behavior, try persuading Iron Will into leaving, but he shrugs their offers off after insisting that Fluttershy was overdue with her payment. Fluttershy comes out of her house and Iron Will demands he be paid his fee up front. However, because Fluttershy was not satisfied at all after her new attitude drove her friends away, she refuses to give payment. After trying to cut a deal, Iron Will is instead given an emphatic "No means no." Proving to be a minotaur of his word, he concedes, and while leaving, he comments that he should use it as a new catchphrase for his next seminar.

In the season six episode Flutter Brutter, Iron Will is depicted in a photograph in Pinkie Pie's wallet.

In season seven, Iron Will appears in Once Upon a Zeppelin as the host for the zeppelin cruise the Sparkle family is traveling on. He is soon revealed to have sent the family their tickets in order to use Twilight and Cadance's fame to increase passengers, and talks Twilight into making numerous appearances so that the rest of the family can enjoy the cruise. Eventually, Twilight decides that enough is enough, asking the other passengers to allow her to have some time with her family. The other passengers, having been told that Twilight was a part of the cruise from the start, turn on Iron Will, who retorts that he had never actually promised that a princess would appear. When the passengers react with anger, Iron Will parachutes off the ship, refusing to refund their money.

In season eight, Discord temporarily hires Iron Will to be a substitute teacher at the School of Friendship in A Matter of Principals. He tells the students that they have to "make" friends by being overly forceful, pushing Yona to be as demanding as possible.

In season nine, Iron Will briefly appears in Fluttershy's group shot during The Magic of Friendship Grows in The Last Problem.

In Siege of the Crystal Empire, Iron Will takes part in an invasion of the Crystal Empire with Flim and Flam, Lightning Dust, and Queen Chrysalis in hopes of regaining his lost charisma. Iron Will's participation in the invasion is voluntary at first, but by Friendship is Magic Issue #36, he begins to have second thoughts in consideration of his family.

Iron Will appears in a photograph in episode 10 of Baby Flurry Heart's Heartfelt Scrapbook, "The Magic of Friendship".

Iron Will is a character in Gameloft's mobile game. His in-game description states, "iron will is 200% confident that this description captures iron will's unique brand of assertiveness!!!"

Iron Will appears on the Chaos is Magic and Season 2 posters.

Iron Will's his name, training ponies is his game! And what does this Minotaur train ponies in exactly? Assertiveness! He's so confident that his seminar will turn you into a lean, mean, assertive machine, that he guarantees you'll be 100% satisfied. Interested? Word on the street is that his next seminar will be titled 'No Means No,' and it's coming to a town near you. If you happen to spot Iron Will around town, then please, for pony's sake, never cut in front of him in line!

IRON WILL is a muscle-bound minotaur who travels throughout Equestria as an inspirational speaker. He loves using his positive mantras and high-octane energy to get ponies up and moving. Iron Will has an enormous ego and often refers to himself in the third person because he loves to hear his own name.

Iron Will constantly refers to himself in the third person, except in few cases such as introducing himself: "Iron Will's my name, training ponies is my game!" His overuse of the third person comes during situations in which he is confident or proud, like during his seminars. Correspondingly, he uses the first person when he feels defeated, such as after he is humbled when Fluttershy refuses to pay him. Despite his brutish appearance, Iron Will is cunning, legalistic, and somewhat deceptive. While he has a very forward personality, he is shown to honor contracts and promises.

"That's no joke, friends. Iron Will is so confident that you will be 100% satisfied with Iron Will's assertiveness techniques, that if you are not 100% satisfied, you. Pay. Nothing. But I pity the foal who doubts Iron Will's methods."
— Putting Your Hoof Down

"Iron Will's my name, trainin' ponies is my game."
— Putting Your Hoof Down

"You were nothing but a doormat and Iron Will turned you into a lean, mean assertive machine!"
— Putting Your Hoof Down

"Iron Will's Cruise of the Princesses makes no guarantees as to the participation of actual princesses. But Iron Will learned his lesson before. Satisfaction not guaranteed. No refuuuuuuunds!"
— Once Upon a Zeppelin

"They call it "making friends", because you have to make creatures be your friends!"
— A Matter of Principals

"Iron Will is ready to bring the pain!"
— My Little Pony: Friendship is Magic Issue #35

"Iron Will is scared of nothing! But Iron Will has a family! He didn't want to overthrow the kingdom!"
— My Little Pony: Friendship is Magic Issue #36 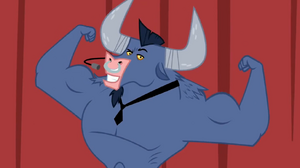