It's About Time is the twentieth episode of the second season of My Little Pony Friendship is Magic and the forty-sixth episode overall. In this episode, after receiving a warning from her future self, Twilight drives herself crazy in an attempt to avoid an unspecified upcoming catastrophic disaster.

A small part with Pinkie acting as a gypsy to tell Twilight her future reappears in Cakes for the Memories.

It's 3 in the morning

The episode begins with Spike in a dream sequence where he is showing Rarity around a mysterious land of ice cream. He shows her his house, made of ice cream and "extra chocolate fudge". He then wakes up at 3 AM and sees Twilight Sparkle pacing downstairs in the Golden Oak Library lobby, worrying about herself running out of time in this month's schedule to make a new schedule.

Twilight remains awake writing out her schedule until dawn. As she finishes, a bright light appears on the other side of the lobby. Another Twilight appears out of the bright light, with a messy mane, tattered black suit with an eyepatch and bandage, and a scar on her face. Twilight is initially shocked, since meeting another her is "not scientifically possible." The other Twilight explains that she is from the future. Present Twilight asks how she figured out how to time travel, to which she responds by stating that the spell is in the Star Swirl the Bearded wing of the Canterlot Castle. Unfortunately, due to Twilight's intense curiosity about time travel, Future Twilight is unable to get a word in edgewise and doesn't have enough time to warn her of what will happen "next Tuesday", which is when she is from. She vanishes back into the future just mere seconds before she is able to convey her warning. The present Twilight assumes that because Future Twilight looked as bad as she did, she was going to warn Twilight about some kind of horrible disaster and determines that she has to find out what it is and prevent it.

The next scene shows Pinkie Pie and Fluttershy carrying party goods through Ponyville. Pinkie is floating with a bunch of balloons, whereas Fluttershy is carrying everything else on her back. Twilight slams into Fluttershy as she runs through Ponyville to warn everyone of an incident she believes will happen next Tuesday. Wearing a Groucho Marx disguise she accidentally puts on after crashing into Fluttershy, Twilight jumps onto a platform and warns a small group of Ponyville residents of the incident. They proceed to laugh at her twice - once because of her disguise, and again because of her ludicrous story that she saw herself from the future.

Twilight's friends, however, believe her story, so Twilight thinks up a plan to try prevent the disaster. She tells the Pegasi to search all over Equestria looking for potential disasters, and they do so. She instructs the remainder of Ponyville's residents to "disaster-proof Equestria". Twilight oversees the entire operation, checking off items on her list as they are completed, including maintaining the dam, filling in wall cracks inside the library, topping off a water tower, reinforcing a bridge, and giving Pinkie Pie a haircut.

Suddenly, Cerberus arrives from Tartarus out of nowhere and scares everyone but Spike and Twilight away. Twilight assumes that this was the disaster Future Twilight wanted to warn her about and prepares to stop Cerberus. Before she can do so, however, Fluttershy intervenes and soothes Cerberus by rubbing its belly. On being asked by Twilight for a ball, Pinkie Pie pulls one out of a tree knot, stating that she stocks balls all over Ponyville in case of a "ball emergency". She gives it to Twilight, who then uses it to lure Cerberus back to Tartarus. When Twilight returns the next morning, she's covered in soot. Spike suddenly belches a "lost dog" poster, noting that Princess Celestia hadn't heard about Cerberus being returned. However, the scroll hits Twilight in the face and gives her a paper cut on her cheek. When she sees this cut in the mirror, she notices that it's exactly the same cut on Future Twilight's cheek, and realizes that her efforts to "disaster-proof" everything have not worked.

Twilight continues to pace around the lobby, gouging a deep, circular groove in the floor in the process. She reasons that if she stays still, nothing could possibly happen to her, and thus the disaster will not happen. Spike begins to take advantage of Twilight standing still by taking tubs of ice cream and eating them, deciding that the resultant stomach ache will be his future self's problem. Then, Rainbow Dash enters, stating that a Pegasus just came back from "Baltimare" with an all-clear. She asks why Twilight isn't stopping Spike from gorging himself on ice cream, to which Spike replies that she won't because she is standing still until next Tuesday. They both begin laughing at Twilight, and Spike begins tickling her with a feather. This culminates in Twilight using magic to catapult Spike away, which in turn results in Spike being flung into a wall and belching up a fireball which hits Twilight. The flame messes up Twilight's mane, causing it to look exactly like Future Twilight's mane. Twilight concludes that not doing anything has not changed the future either and laments her inability to predict the future and stop the disaster that way.

Spike tells Twilight he knows someone who can help. He then brings Twilight to "Madame Pinkie's place." Pinkie has taken up the role of a fortune teller, and begins searching in her crystal ball for Twilight's future. She prophecies that Twilight will receive "a really cool birthday present next year". Dissatisfied by this, Twilight begs Pinkie to use her Pinkie Sense to predict what will happen. She says she is unable to do this, stating that her Pinkie sense only predicts immediate, inconsequential events. This is proven by a sudden tail-twitch, resulting in a flowerpot landing on Twilight's head. Pinkie finds it interesting that the pot just came out of nowhere.

In the next scene, Pinkie Pie arrives at the library, and inside she finds Twilight (now with a bandage on her head just like Future Twilight's bandage, due to the flowerpot incident) manning a variety of telescopes, machines and graphs, performing various calculations. Twilight has decided that since doing things, not doing things, and trying to predict the future have not done anything to prevent the disaster, her only choice left is to "monitor everything." She uses one of her telescopes to look into the sky, but accidentally aims it at the sun, hurting her eye. Pinkie Pie whips out an eyepatch from the fireplace, stating that she stocks eyepatches all over Ponyville in case of "an eyepatch emergency" and puts it on her. With the eyepatch, Twilight looks even more like Future Twilight, and realizes that she has done nothing to stop the catastrophe. Twilight resolves that she only has one option left to stop the disaster: stop time.

Twilight, Pinkie Pie and Spike arrive at Canterlot by train to search for a spell to stop time. After avoiding a guard by pretending to be statues, Spike asks Twilight why they need to wear the black bodysuits, and Twilight tells the other two that the time spells are kept in the Star Swirl the Bearded wing of the archives, which is the most secure. They head off, but Twilight rips her suit on a bush, resulting in her looking just like Future Twilight. They enter the archives and begin to sneak around the guards in order to make their way undetected to the Star Swirl the Bearded wing. They end up going around in a circle and ending up where they started. A guard catches the trio, but recognizes Twilight and opens the door to the wing for her.

Once inside the wing, the trio begin searching frantically for the right spell. Unfortunately, they don't find the spell in time, and the sun rises. Twilight ducks under a windowsill, believing that the disaster is about to occur, but nothing happens. Princess Celestia comes across Twilight, but just bids her a happy Tuesday and walks off. Twilight then realizes that there may have not been a disaster after all, and she was just making herself frantic over nothing. She doesn't know what Future Twilight was trying to tell her, but she does realize that she looks ridiculous in her current state.

Going back in time

While she could not find a spell to stop time, Pinkie finds a spell that allows the caster to go back in time once for a short period. Twilight decides to use the spell to warn her past self not to worry about a disaster that isn't going to happen, and exactly the same sequence plays out that happened earlier when Twilight was first met by Future Twilight. After returning, having not being able to warn Past Twilight, she realizes that she was trying to warn herself to not worry, only to be foiled by her past self's fascination of time travel. Thus, she has ensured that the events she was trying to prevent will actually happen. Pinkie reassures her that it's "Past Twilight's" problem now. The episode ends as Twilight puts Spike, now experiencing a stomach ache after his ice cream binge, on her back and returning home.

Twilight Sparkle: My future self tried to warn me about a horrible disaster that's going to occur sometime before next Tuesday morning!
Applejack: What kind of disaster?
Twilight Sparkle: I don't know! I got sucked back into the future before I could explain!
Pinkie Pie: Run for your liiiiiiiife!

Pinkie Pie: [screaming] Anypony else wanna panic with me? No? [resumes screaming]

Twilight Sparkle: Wow, I knew you were good with animals, but this is amazing.
Fluttershy: Aww, he's just a big furry guy who got out of his yard, that's all. Right, Cerberus? Who's a good boy? Who's a good boy?

Twilight Sparkle: Ah! My eye!
Pinkie Pie: Don't worry, Twilight, I have eye patches stashed all over Ponyville, in case of eye patch emergency. There! Now you look like a pirate. A sleepy pirate, with a really weird mane cut.

Pinkie Pie: I still don't understand how sneaking around the archives will help her find out about her birthday present.

Spike: Uh, Twilight?
Twilight Sparkle: [hushed] What is it, Spike?
Spike: Isn't this where we came in?
Pinkie Pie: Cool! Can we climb in the window again? That was super fun!

Spike: I don't get it. If future Twilight wasn't warning you about a disaster, then what was she trying to tell you?
Twilight Sparkle: [giggles] I don't know. But I do know one thing. I look ridiculous.
Spike and Twilight Sparkle: [laughing] 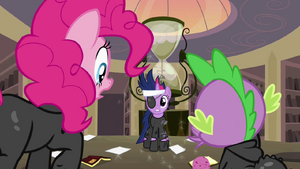 It's About Time image gallery